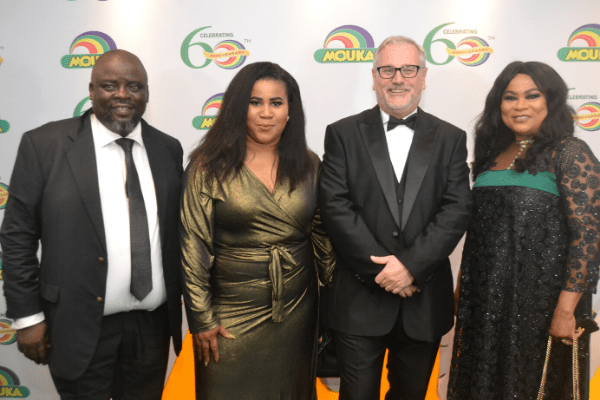 The ‘firmament’ at the Green Gala Night set by Mouka, the nation’s leading mattress and other bedding products manufacturer, to round off its 60th-anniversary last weekend in Lagos was brightened with command appearance of leading Nollywood stars and On-Air Personalities.

Other celebrities in attendance include Adebayo Davies, an actor (Baba Landlord in Flatmates), Chioma Omeruah (Chigul), an actress and comedian, Lotachukwu Ugwu, an actress (popularly known as Kiki in the TV series Jenifa’s Diary), Arese Ugwu, author and social media financial expert (popularly known as Smart money Arese), Sisi YemmieBlogger, Vlogger and all-round creative to complete the galaxy of stars at the night.

The night was anchored by Okechukwu Anthony Onyegbule, popularly known as Okey Bakassi, a Nigerian stand-up comedian and actor.

Sobowale, while responding to journalists’ questions, described quality sleep as a necessary ingredient to a healthy and productive life of a busy professional like her, while thumbing up for the Mouka brand.

In his welcome remarks, Mr Raymond Murphy, Managing Director/Chief Executive Officer of the company explained that the last 60 years has been a long and successful journey for Mouka, adding that the company has built an enduring brand in the last six decades.

“This is a big milestone for us. At 60, we are the market share leader in the foam and beddings sector” he said while praising the stakeholders and shareholders of the company for giving quality and wholesome support to the company over the years.

He maintained that the last 60 years have been eventful for the company in terms of job creation, value creation for shareholders and business partners and high level of governance compliance.

“Our mantra within the company is good to great. Good for us is never good enough. We continue to strive for greatness.” Murphy told journalists at the venue.

Others highlights of the night included the cutting of the anniversary cake and the winning of exciting prizes by guests who marvelled at the exhilarating ambience and the touch of class that surrounded the celebration.

The foundation for Mouka was laid 60 years ago in the historic city of Kano when the scion of the Faiz Moukarim family started the Moukarim Metalwood factory to manufacture furniture and iron beds.

Since then, Mouka has gone into manufacturing of foam and spring mattresses, as well as other bedding products at its three production facilities across Nigeria.

The company has also developed an extensive distribution network with more than 1,000 branded sales outlets nationwide.

With certification, smallholders will get a seat in the global palm oil market

The Executive at Maslow