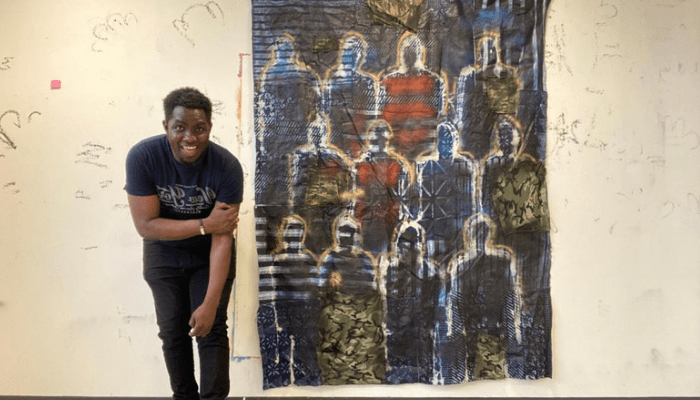 Those who say Nigeria is replete of talents are right. If you were at the new Adelphi Atrium Gallery, Peel campus, Salford Manchester, recently, you will confirm that.

For two week (September 29-October 13, 2022), a Nigerian talent enthralled visitors at the leading UK art gallery with so much creative ingenuity that many still talk about it today.

Suraj Adekola, one of the leading Nigerian artists of international repute, whose works have continuously hit international auctions with good prices, is making his country proud in far away Manchester, United Kingdom.

The artist, who recently earned an MA degree in Contemporary Fine Arts at the University of Salford, UK, decided to celebrate his feat and also new skills acquired after his second degree with a new body of work, comprising the ‘We Should All Be Blacks’ series.

The works are unique in the sense that Suraj is displaying a higher level of mastering of his craft, exploring the unusual and also using them for activism for equality for all races, especially Black people.

Firstly, he went unconventional by introducing a new approach to displaying an artwork by using a curtain pole to hang his work instead of the conventional frame.

He also adopted the concept of blackening the surface of his artwork to celebrate blackness, a technique that challenged his creative ingenuity.

Furthering his unconventional approach, Suraj repurposed the Adire (tie-dye) fabric, a clothing material meant for fashion, as surface for paintings instead of the conventional canvas.

Taking a deeper look at the technique, the artist used the Adire fabric to connect to his Egba-Yoruba culture and to sustain his Black identity in a multicultural environment like the UK. Yet, he did not lose focus on the topical issues he intended to give attention to with his works such as identity, politics, migration, dislocation, and co-existence. Of course, with that unconventional technique, Suraj questioned the language of painting and the process underlying it.

Secondly, the artist has the interests of his root, Black people and others being marginalized at heart, hence a seeming activism with his work.

For instance, while his works call attention to Black-cultural identity, they, most importantly, highlighted the contributions of the people of colour to the development of the British Empire as well as other developed nations.

But the maturity of his character is in his insistence on equality for all races and people, though using Blackness as a reference point.

So, the emphasis is not just Black, as the works are meant as tools to help prevent further marginalisation in a multicultural environment like the UK.

Bearing in mind that the struggle for equality will continue in the future, Suraj proffered a solution with his works saying, “The body of work that I have created is a direct response to preventing segregation and promoting unity among diverse cultures.”

The import of his opinion expressed with his works is that being black is not to undermine any culture, or ask people of other colours to become Blacks, but it is to promote equality in the society by seeing each other as equal rather than thinking that one culture is supreme over another.

As topical and relatable as the new body of work is, the narratives were drawn from postcolonial theorists such as Stuart Hall, John H. Bracey, Jr., Philip D. Morgan, Kehinde Andrews, Sean Hawkins and David Olusoga, who the artist generously appreciated for their influences on his art.

As the saying goes, ‘a man’s gift makes a way for him’, Suraj’s sheer creative ingenuity has opened for him now and will be opening more opportunities in the future.

With his art, he now enjoys a Graduate Scholarship Award from the University of Salford Art Collection as well as a membership opportunity with Castlefield Gallery in Manchester, which will allow him to participate in artist talks and exhibitions with the gallery.

For his fans, lovers of visual art, Nigerians in the Diaspora UK and especially the Nigerian visual art community, Suraj is trending now and hopes to make the country proud with his craft.