Prosper Africa to scale fashion and art business in Africa 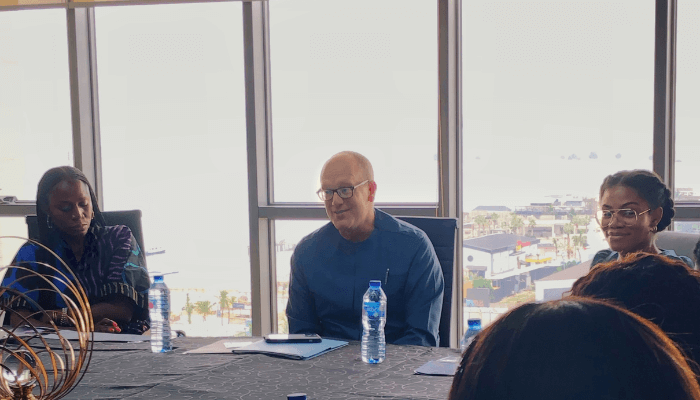 The city of Lagos hosted fashion enthusiasts, designers, models, and investors from Africa and the world at large at the Heineken Lagos Fashion Week celebrating Africa as it shapes the future of fashion.

Prosper Africa, a U.S. Government initiative that connects U.S. and African businesses with new buyers, suppliers, and investment opportunities hosted fashion and art designers as well as corporate investors at the Fashion Business Series event held at Landmark Towers to deliberate on issues affecting the growing creative industry and how to scale industry in Africa.

According to their report tagged “Investment and partnership opportunities in Africa’s creative industries,” Africa’s fashion industry has witnessed growth in global recognition and demand. It also reports that international retailers such as Nordstrom and Bloomingdales have implemented retail programs to support emerging African designers.

Will Stevens, U.S. Consul General speaking to our reporters on how initiatives like Prosper Africa can scale the fashion business in Nigeria, he said, “Prosper Africa as an entity based in Washington DC looks to support discrete initiatives and hire companies to do a report to look at the creative industries and figure out what we can be doing together to export or increase activities and accelerate. They identified some obstacles and opportunities for the US government and private sector investment.”

He stated that the initiative will be looking at everything ranging from micro-grants to small enterprises in Nigeria citing examples of a small-scale female designer who received a $10,000 grant from the US Africa Development Foundation (USADF) after completing a U.S. government-sponsored training program.

He also said they are bringing in institutional investors of over $100 million to invest in venture capital companies based in Nigeria so they can do the hard work of identifying opportunities to accelerate the existing growing industry.

According to the report, the art industry requires more robust market linkages to build international partnerships that would scale the export of African art.

On the aspect of the investment landscape, Prosper Africa looks to tackle some of the issues of physical infrastructure and talent infrastructure in the fashion ecosystem.

Claire Idera, an Art and Fashion Educator at CI Workshop, speaking with our reporters said that one of the grassroots problems in the fashion and art design ecosystem is education. She stated that the Nigerian education system doesn’t have art and design courses and that’s what her brand “CI Workshop” brings to the system to train people in design research, fabric development, and bring development into the fabric.

She also calls on the government and other investors and private venture capital to provide funding for these programs. She says the majority of the fashion business is on the street and on social media trying to get as many as 10,000 followers thinking that would help bring sales. Still, they don’t know that what they need to fix is their design and that’s because they didn’t attend fashion school or acquire the necessary training.

The U.S Consul General concluded by saying a lot of work needs to be done in the fashion industry on how they scale their businesses, from going to customization to mass production and also training business owners on the export market and how to properly package their product for the U.S and global market.