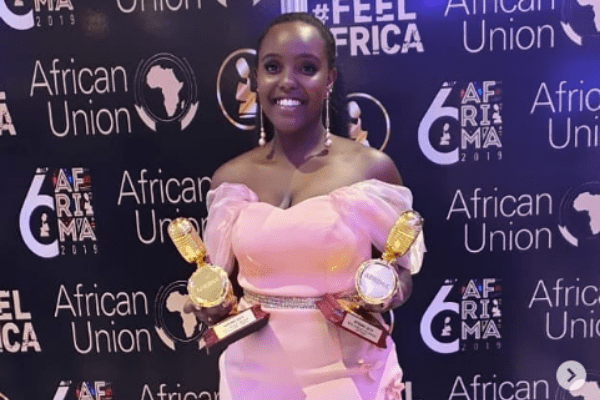 Judging by all standards, the 6th edition of the All Africa Music Awards (AFRIMA) was a success. From a befitting venue, spectacular opening, presence of an array of African music icons and upcoming ones, enthralling live performances, award presentations to the cheerful African audience, the show lived up to expectations.

But beyond the glamour and entertainment, this year’s edition was a revelation of the shift in the music industry with the emergence of new music acts across the continent who are upstaging the big names.

Nikita Kering, a 17-year-old Kenyan music sensation, was the highlight for many who graced the awards night. The teenage musician truly upstaged the big names to win big at the awards this year.

The Kenyan teenager, who was accompanied by her mother to AFRIMA 2019 awards, stole the show at Eko Convention Centre, Eko Hotel and Suites, Victoria Island Lagos, venue of the awards, when she emerged winner in two notable categories.

She defeated the likes of South Africa’s Sho Madjozi and Tellaman, Nigeria’s WurlD/Sarz and Skiibii, Egypt’s Hamada Helal and Tanzania’s Rosa Reese to emerge winner of the Revelation of the African Continent category.

Of course, she is truly a revelation. She started in music when she was barely 9 years as a passion and today, the 17-year-old singer has toured the world, thrilling international audience and winning fans with her music at home and abroad.

Yet, she surprised those who undermined her prowess by going further to win the Best Female Artiste in Eastern Africa, a category mostly won by established music acts.

Surprisingly, the teenager beat seniors such as Uganda’s Irene Namatovu, Tanzania’s Maua Sama, Queen Darleen and Vanessa Mdeeto to carry the day as the best female musician in East Africa at just 17 years.

When she was announced as the winner of the best female artiste category, her mother said the obvious on stage while about receiving the awards on her behalf. She said, “You know Nikita is a small girl, she is feeling sleepy and may have retired in her hotel room”. Many were laughing, but that is true of her daughter, though she appeared at the right time to assist her mother in receiving the award.

She was delighted at winning the awards but still hopes to get to the top, just like her idols Beyoncé and Adele. With the way things are going in her favour, she will not stop until she gets to the top like her idols.

Well, credit goes to the award’s judges and voters for choosing performance over big names. As well, the ‘big names’ need to wake up as the underdogs are becoming more determined to upstage them with unmatched creativity.

Nikita won the two awards with her song titled ‘Happy with you’, but her adorable voice and lovable nature endear her to the fans, especially the audience at AFRIMA 2019 awards.

Nikita Kering, Kenya’s rising teenage music star, debuted in the music scene during the album launch of Emmy Kosgei, Kenya’s gospel powerhouse, in December 2011, where she performed on stage with the main act, who later became her mentor.

Since then, she has honed her craft further, performed in Nigeria at Emmy Kosgei’s wedding, at the Gotabgaa International Conference in Washington DC, and has made music and cultural tours to Cologne, Germany, and Pretoria, South Africa.
Back home in Kenya, she has performed locally at various events.
Also, top winners at AFRIMA 2019 include; Saudi Sol, who clinched the Album of the year in Africa, Artiste of The year in Africa went to Burna Boy, while Wizkid won the Song of the year award.
In the tradition of the awards, AFRIMA Lifetime Achievement Awards were presented to Awilo Logomba and Innocent Idibia (2Baba) for their sustained contributions to the development of the music industry in Africa.

Custody services … a compass for a complex world

ComputerVillage.ng unveils Nedu Wazobia as Chief Auctioneer for her Bazaar of Hope…

OkadaBooks for the Weekend featuring ‘No Need for Lies’