Why Heineken’s acquisition of NB stocks matters for brewers 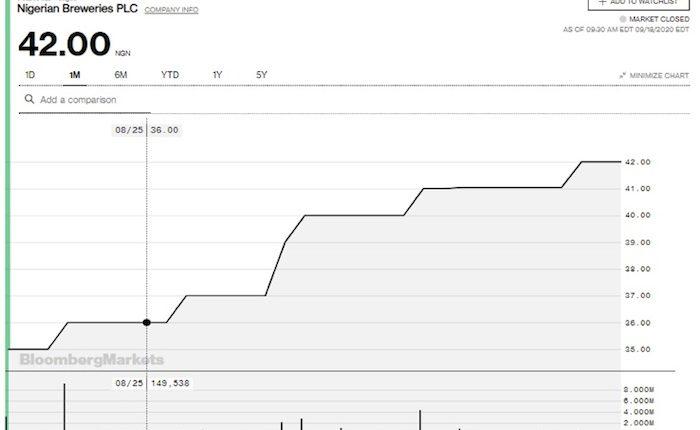 Heineken Brouwerijen B.V, largest shareholder of the Nigerian Breweries (NB) stocks, has over the last two months consistently purchased units of NB’s stocks, increasing its shares in the company.

As of 2017, the percentage of Heineken issued share capital stood at 37.76 percent.

Between the month of August and September, Heineken purchased over 10 million shares with an average price of N37 to N40 per unit, which puts the total value of Heineken at N126.98 billion accounting for 37.80 percent of Nigeria’s Breweries’ market cap of N335.87 billion.

According to analysts, Heineken is positioning itself for the rebound of the breweries industries following the gradual resumption of business and commercial activities as the sequential acquisition of the brewer’s shares by Heineken increases control of the company.

Akinloye Ayorinde, equity analyst at CSL Stockbrokers, said Heineken is simply increasing its share holdings ahead of the expected recovery of the sector.

“The price of Nigerian Breweries stock has declined significantly over the past year and considering the fact that things are slightly beginning to look upwards in the brewery industry, it is an opportunity to buy the stocks at a low price and take advantage of the expected recovery going forward,” Ayorinde said.

“Buying NB stocks means taking a long-term position and expecting full returns in the next financial year as the events that characterised the first and second quarter of 2020 will significantly drag the results for the third and fourth quarter,” he explained.

Similarly, Gbolahan Ologunro, equity analyst at CSL stockbrokers, said that Heineken finds the stock price cheap to purchase during this period as they expect it to skyrocket when activities return to normalcy.

“They are buying now because they find the stock price very cheap at that price. As a majority shareholder, they have a long-term investment horizon, hence it makes sense for them to buy now that the stock is trading at very low levels not seen in decades,” he explained.

A detail of each transaction was disclosed by the company in a series of notifications signed by Uaboi Agbebaku, company’s secretary, which was sent to the Nigerian Stock Exchange. The transaction prompted an uptick in the value of the brewer’s shares on the stock market. At the close of market on Friday, the company share price stood at N42 per share, which was the highest recorded gain in one month.

Analysis of NB’s financial report for the first half of 2020 reflected the impact of the pandemic on the sector. Nigerian Breweries (NB), the biggest brewer controlling 56 percent market share, recorded a revenue decline of 11 percent to N151 billion in the first half (H1) of 2020. The firm’s profit after tax declined by 58 percent, from N13 billion in the first half of 2019 to N5.5 billion in the same period of 2020,. Consequently, the poor revenue forced the company to cut its administrative and marketing expenses as the situation demanded.
Data from Meristem Research say that the Nigerian brewery industry is the second largest beer industry in Africa and accounts for 18 percent of Africa’s total beer output. Heineken’s investment is expected to expand that. The Nigerian market is a highly competitive one dominated by three major players, NB, a subsidiary of Heineken with 59 percent market share; Guinness, a subsidiary of Diageo with 25 percent, and International breweries with 16 percent.

The NB could have more market share with larger expansion projects as its share appears increasingly attractive, analysts say.