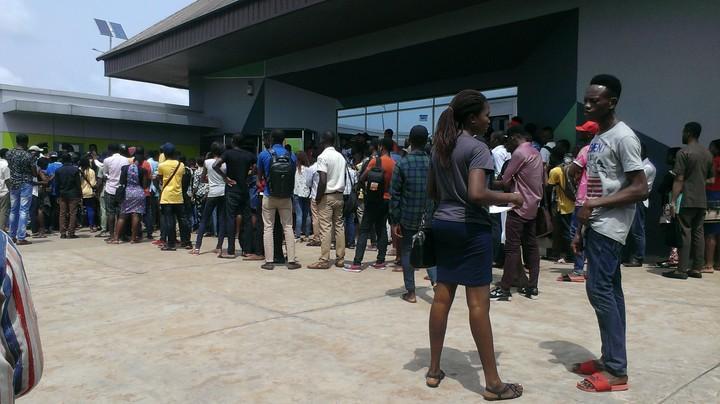 Nigerians who had anything to do with banks in the 80’s and early 90’s would remember the role tally numbering played in banking transactions, and that was before the advent of technology and internet.

At that time, bank transactions were manually done and to ensure that customers are served according to how they arrived to the banking hall, a means of identification called ‘tally number’ was provided.

Sometimes, it was a piece of plastic on which numbers were inscribed or carefully carved square-shaped piece of wood with numbers on them. At that time, some customers, especially elderly people, went to bank clutching their mats to sleep. Indeed, some of them did sleep before it got to their turn to either cash some money or make some deposit.

It was usual to hear customers scream on top of their voices to cashiers or security people, “Give me my tally number”. Cashiers used to overwork themselves as they laboured manually to satisfy a horde of desperate customers.

Today, the long queues have returned to the banks, not on account of slow pace of service or manual transaction procedure, but as a result of the outbreak of coronavirus (COVID-19) pandemic, which has necessitated social distancing and had forced businesses including banks to operate at 60 percent capacity.

These days, banks do not open all their branches at the same time such that a locality that has three to four branches of a particular bank may end up having only one out of the four open for business.

By implication, people, who used to spread themselves in all the four branches, may end up in one branch thereby blowing the number of people in one bank; and they want to be attended to at same time.

To deal with the crowd, banks have well arranged seats in their premises where customers sit to wait for their turn to be allowed inside the banking hall for their transaction. In doing this, man-hour is lost on daily basis as people spend several hours before they could be attended to, depending on the crowd in a particular branch.

“Two weeks back, I went to a branch of one of the new generation banks to pick up my debit (ATM) card because the old one I had, has expired. I got to the bank by 10:00am only for me to meet a long queue of people outside the banking hall and I was given number 255,” said Ngozika Obiora, a business woman.

While wondering how such number of people were able to get to the bank in one hour when banks opens by 9:00am, she said that another customer, who was lucky to get a number that was a little above 60 told her that she was at the bank as early as 7:30 am only to see that a lot of persons were already on the queue.

According to her, she ended up spending close to four hours in the bank because she left the bank around 2:00pm just to collect ATM card.

“Could you imagine that my whole day was spent in the bank and my shop was left unattended to? I never knew I would spend such a long time in bank because if I knew, I would have gone to the bank on my day off but the truth was that I needed the ATM card to be able to make some withdrawals on that particular day,” she said.

On his part, Philips Umoru, a media practitioner told BDSUNDAY that he was given number 96 on the day he went to the bank to pay in a cheque into his account.

“I usually don’t go to the bank because I do a lot of online transactions but this time I was forced to go to the bank on that particular day and it was very frustrating to spend close to three hours in the bank just to pay in one cheque,” he said.

According to Umoru, he would have left the bank in annoyance without having to do the transaction but the saving grace was that that particular day was his off day from work. “Going to the bank nowadays is very scaring because the crowd outside the banks can put one off.”

Tina Eze, who told BDSUNDAY that nothing will make her visit any banking hall again until COVID-19 is over in Nigeria, said that if one is not careful one might end up contracting the virus in the bank.

Stating that there is a long list of transactions, which people can do online using Mobil App and other internet banking platforms rather than going to the bank to queue, she said she was shocked when her brother mentioned to her that he recently went to one of the first generation banks to do banking transaction only to see long list of people that wanted to print their BVN, which they could have gotten online without the help of anybody.

“I only go to ATM machines to withdraw money but even going to ATM is also frightening because in some banks, you would see a long queue of customers that want to use the machine. The problem is that many Nigerians are yet to adapt to using online banking transaction because in some cases, you see people going to ATM machine just to transfer money that can be done online,” Eze added.

Rasheed Ade, a pharmacist told our correspondent that he had to leave the bank in anger few days back when he went to the bank to do a transaction and he was given number 48.

“I had some other things to do on that day and I couldn’t wait for my turn on the queue that was why I had to leave the bank. In fact, coronavirus has succeeded in taking us backward because this type of banking that people are numbered was only done in the 80s when technology and internet were not there. To see this repeating itself in this computer age is disheartening,” said Ade, who is in his late 50s.

Sharing her experience, Bola Demilade, a banker told BDSUNDAY that the outbreak of COVID-19 has had an adverse effect on both the bank owners and their employees.

“In my bank, I am not even on a teller rather I work under the Mainland operations. I think what our employer has been able to do, is to rotate people such that a work roaster was created for staff. Some people work for two weeks while the remaining set work for another two weeks. However, the crowd in banks is endless because there are limited cashiers or tellers to attend to customers, and because of social distancing, all customers are not allowed inside the banking hall at the same time rather numbers are given to them according to first come, first served,” said Demilade, who works with one of the old generation banks.

According to her, people are allowed into the banking hall in tens; however, the security personnel manning the gate put seats outside where others sit to wait for their turn to enter the banking hall, but if they have hundreds of people that is when you see a lot of people standing.

“For us in operations, we have been working from home ever since the ease of lockdown. Our systems were configured to enable us work remotely from home. I work under loan and my job is to analyse, authorise or decline any loan application that is from N1million and above. While some people’s job are to analyse loan applications from N100, 000 to N1 million,” she said.

She further said: “Working from home has its own challenges due to poor electricity supply and fluctuation of data or network connection in the country. My work can be delayed because when my laptop is down and no fuel to power my generator or when my network connection is poor, it becomes very difficult to meet up and request will pile up. In the office, there is usually constant power supply and strong network connection.”

Demilade, who noted that during the lockdown, her employer had to secure hotel accommodation for some staff to enable them have easy access to the office, said that at a point, it became very expensive for the bank because it was costing the bank a minimum of N30,000 per day and over N300,000 in one month for one person.

“But now, our employer is no longer comfortable with the cost implication that is why people are allowed to work remotely especially women with children to limit their risk of contracting the virus and transmitting to their children. Meanwhile, those cashiers that must be in the office are always encouraged to join staff buses,” she explained.

On the likelihood that things might return to normal due to the Federal Government directive that banks should resume full operations, she said her employer is yet to issue directive in that regard, and that she doubts that her bank is going to open up all the branches from this week because they are also concerned about their staff wellbeing as the number of confirmed cases continues to rise in Nigeria.