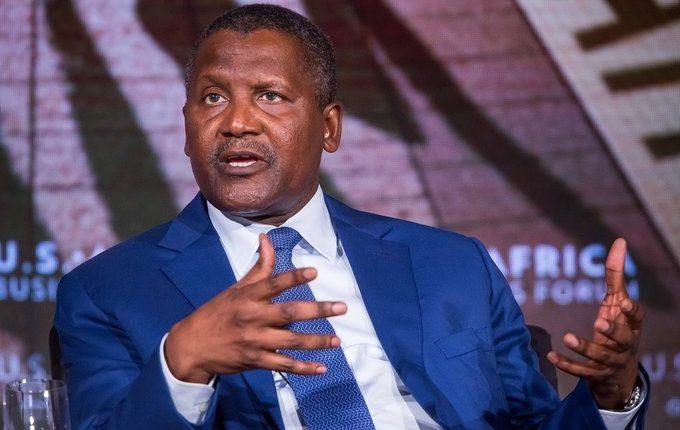 President of Dangote Group, Aliko Dangote, has said that despite the challenging economic situation in 2019, Dangote Cement was able to sustain 54,000 jobs in four African countries, where the company has its operations. The countries are Nigeria, Ethiopia, Senegal, and South Africa.

The business mogul told shareholders at the company’s 11th Annual General Meeting in Lagos that more jobs would be created as the company intensifies export of clinker to other neighbouring countries from Nigeria.

“According to our 2019 socioeconomic impact assessment study specifically on our operations in Nigeria, Ethiopia, Senegal, and South Africa, we sustained 54,005 jobs (direct, indirect, induced) in these four markets in the year under review,” he said.

Dangote Group is the highest employer of labour in Nigeria outside the Federal Government, and with its refinery project coming up, the company will have more than 100,000 Nigerians under its employment.
Recently, Godwin Emefiele, governor of Central Bank of Nigeria (CBN), while lauding Dangote’s investment drive, said he was excited with the progress made at Dangote Refinery and Petrochemical plant so far, and that when it becomes operational, the refinery and petrochemical plant would increase its workforce from the current 34,000 to over 70,000.

Briefing shareholders at the 11th Annual General Meeting (AGM) held in Lagos last week, Dangote told the shareholders that the year 2019 was a strong year given the tough business environment across most of its operating geographies, disclosing that the Group recorded volumes of 23.7 million metric tonnes and revenues of N891.7 billion.

“We recorded a strong EBITDA margin of 44.3 percent. As a result of this performance, the Board has recommended for your approval a dividend of N16.00 per ordinary 50 kobo share,” he said.

Speaking on the local Nigerian operations, he said, “Nigeria’s cement market grew slightly in 2019. We estimate that total market consumption was up between 2-3 percent on the 20.7Mt estimated in 2018.”

Dangote explained that the modest performance was in spite of the fact that the market generally was impacted negatively by the disruptions related to the 2019 election cycles, heavy rains and the loss in land export volumes due to the border closure.

“Dangote Cement’s Nigerian operations remained at 14.1Mt in 2019, including export sales of 0.45Mt. Domestic sales in Nigeria were nearly 13.7Mt, compared to 13.4Mt in 2019. This implies a 2 percent growth mirroring the estimated GDP growth for the year. However, land exports reduced to 0.45Mt from 0.7Mt for the full year owing to the border closure in the last few months of 2019,” Dangote said. “The Bag of Goodies promotion, launched in July, drove strong increases in our Nigerian volumes in the third quarter.”

He said the innovative marketing effort enabled the company to maintain its market share despite the 4.5Mt new capacity which came into the market during the year.

He alluded to the new feat by Dangote Cement in commencing export of clinker via shipping from the Apapa and Onne ports to West and Central Africa, adding that the management was encouraged by the performance of its offshore operations.

“Including clinker, pan-Africa volume was 9.6Mt. The total pan-African volume represents 40.1 percent of Group volumes. Pan-African revenues of N282.7 billion were 0.2 percent lower than FY 2018 and represented 31.7 percent of total Group revenues. The region’s EBITDA contribution of N47.9 billion (before central costs and eliminations) represented 12.1 percent of Group EBITDA, at a regional margin of 16.9 percent, compared to a margin of 17.3 percent in 2018,” he said.

Dangote said the stronger performance was recorded in Tanzania, Senegal and Sierra Leone.
“Looking ahead, we expect to further deploy our clinker and cement export strategy across West and Central Africa. The completion of our 1.5Mt grinding plant in Cote d’Ivoire is expected by the end of 2020,” he said.
Dangote lamented that the world faces the stark reality of a major health crisis, accompanied by a devastating impact on the global economy, noting that during these times, the company’s top priority remains the health and safety of its employees, customers, suppliers and society at large.

“As Africa’s largest cement manufacturer, we take seriously our role of social responsibility and we have taken deliberate steps to deploy resources to help our communities overcome hardships in this crisis,” he added.

Commemorating ‘June 12’ without telling its true story is empty symbolism