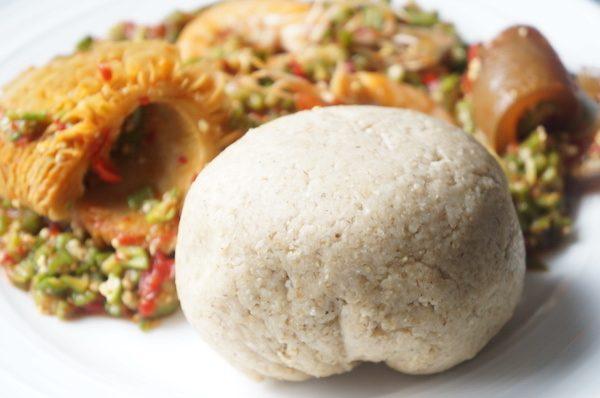 Nearly half of Nigerians consume excessive processed carbohydrates, Poor intake of fruits and vegetables, late supper, are among the dietary habits of Nigerians says a recent Diet and Nutrition Survey.

The survey found out that Nigerians consume processed carbohydrates such as polished rice, pounded yam, eba, fufu, semolina, semovita, amala and wheat on a daily basis, with men slightly more than women to, and people above the age of 50 far less likely than the rest of population, with only 36percent to do so.

Experts say not all carbohydrates are the same; many whole foods that are high in carbohydrates are quite healthy and nutritious. On the other hand, processed, refined or simple carbs have had most of the nutrients and fibre removed.

Eating processed carbohydrates is linked to an increased risk of many diseases, including obesity, heart disease and type 2 diabetes.

The survey revealed that most nutritionists agree that consumption of processed carbohydrates should be moderated. However, they are still the main source of dietary carbs in many countries.

The survey suggested that ideally, no more than a takeaway sized portion worth of carbohydrates should be consumed per meal to moderate the risk associated with consuming such carbohydrates.

Meanwhile, the research was conducted by WellNewMe, a health technology company, in collaboration with Dennis Ashley Medical Clinic, a medical facility based in Lagos, Nigeria, from January 2019 to March 2020.

It was aimed at gathering information about the dietary habits and nutritional status of the Nigerian population.

The survey, which took place across the age range of 20 to 60 years old and was part of a larger programme that examined the relationship between diet and non-communicable diseases such as hypertension, diabetes and cancer.

The survey reveals other significant findings that more than third of Nigerians admit to eating at fast food restaurants at least twice a week.

“Having a balanced diet is key in improving mood and mental wellbeing; maintaining a healthy body weight and lowering the risk of chronic health conditions such as heart disease, stroke and cancer.

The survey also highlighted that fruits and vegetables are important aspects of any stable diet, but yet, it seems that many Nigerians are still not getting enough of the recommended amounts.

“Only 30 percent of the population are eating fruits and 19 per cent are eating vegetables on a daily basis.

“Younger people were less likely than older people to eat fruits and vegetables on a regular basis.

“People who eat more vegetables and fruits as part of an overall healthy diet are likely to have a reduced risk of some chronic diseases.

“While a vegetarian diet also provides some of the same benefits, it is very important for vegetarians to remember to make sure they are getting key nutrients, including: protein, fatty acids, iron, zinc, iodine, calcium and vitamins D and B-12,’’ the study stated.

According to the study, six out of every 10 Nigerians tend to have late supper, of which is detrimental to health.

“People who have late suppers tend to ingest more calories than people who eat earlier, leading to poor weight control and weight gain.

“More than half of Nigerians surveyed said that they have their last meal of the day after 7.00p.m in the evenings, more than three times in the week in the 30 days preceding the survey.

“Men were more likely than women to eat late, and people in their 40s were also the most likely than any age group to have a late meal.

“What research has shown is that people who have late suppers tend to ingest more calories than people who eat earlier.

Preparing Ahead: How NPHCDA is harnessing capacity building to improve health…

Chemical and Allied Products set for merger with Portland Paints