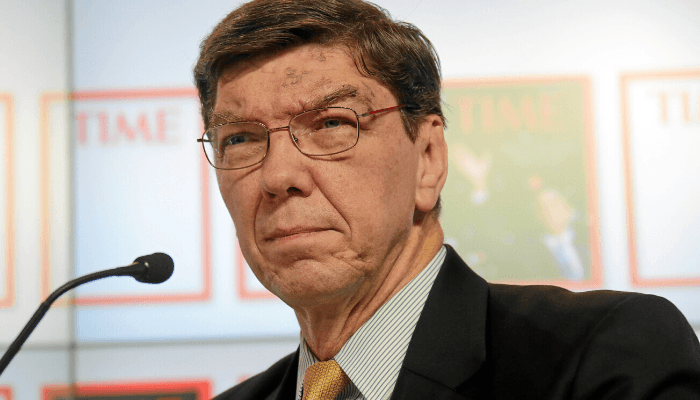 It is said that Abraham Lincoln had a high-pitched voice with a shrill quality to it. When he began his speeches, the audience at first wondered if this tall man was indeed the great orator of whom they had heard.

But as Lincoln’s words washed over them and Lincoln fell into a rhythm, the audience was soon mesmerized — both by the words they heard and how they were delivered.

When Harvard Business School Professor Clayton Christensen began a speech, the effect was similar. Instead of delivering thunder and lightning, his speaking was slow and methodical, soft and unassuming. But as Christensen — a tall man himself at 6 feet, 8 inches — dove into his stories and began teaching listeners how the world worked, he gained steam and cast a spell over a mesmerized audience.

When I shared this observation with Christensen — or Clay, as I called my mentor, friend, co-author and co-founder — he discounted it, with his characteristic humility. But that isn’t to say it wasn’t true.

In the hundreds of times I saw Clay speak, even after his first stroke had hindered his speech, he would still sweep the audience to its feet with the eloquence of his thoughts and insights.

It’s those words and thought patterns, but also his fundamental humanity, compassion and humility that I will miss so much. With Clay’s death on Jan. 23, the world lost a luminary who leaves behind a treasure trove of writings, recordings and influential relationships that will inspire innovators and thinkers in all fields for generations to come.

Clay was a master of using analogies from distant, seemingly unrelated fields to distil complicated problems to their essence and see solutions that others could not envision. He thought in terms of diagrams and stories, which enabled him to develop a set of broadly generalizable theories that held explanatory power across different industries. He could tackle such seemingly unrelated challenges as a company’s growth, financial investing, education, health care, global prosperity, green energy and more, because, from his vantage point, he had seen some of the very same problems elsewhere before.

As he worked across fields, rather than assume that inconvenient facts or observations were wrong, Clay saw anomalies to his theories not as problems or “statistical noise,” but as opportunities to refine and improve them — or correct how he had applied them. It’s why he had a sign outside his office that said: “Anomalies Wanted.”

Clay, of course, had flaws, as all individuals do — and as with many individuals, those flaws were often endearing. Sometimes modest to the point of not interjecting a thought, he could allow misunderstandings to linger. When he told you that an idea you expressed was “interesting,” he was occasionally being genuine, but more often was acting as a patient coach, helping you to discover where you were missing something.

He was the consummate Socratic professor — as the Harvard Business School teaches its faculty to be — seeking not to provide answers, but instead to ask questions to help people learn how to think, not what to think. He avoided conflict. Only rarely would someone, in his opinion, cross the bounds of fairness or intellectual honesty to the extent that they deserved a rebuke, in which case few could be as withering or as pointed in their criticisms. But for the most part, he met criticism with kindness, challenges as opportunities, and interactions as chances to inspire and praise.

It was from Clay that I learned the importance of crafting the right organizational structure when I communicated, as, without it, the logic would be lost. Clay was fond of saying that he never knew how complicated something was until he tried to write about it, but writing could help untangle many of the challenges until it was time to implement, test, and learn.

Once you see the world through Clay’s landmark theories of disruption and innovation, you can’t un-see them. They pervade everything in your life. They are the lenses through which I think about everything I see in the world — so much so that at this point, much of my writing and speaking voice is in many ways inseparable from that of Clay’s. It’s just who I am.

Clay didn’t just impact me in this way. We often talk about coaching trees in football and basketball. In addition to the countless organizations, CEOs, and students he transformed, Clay leaves an impressive tree himself. From Bob Moesta to Scott Anthony and Michael Raynor, and from Karen Dillon and James Allworth to Efosa Ojomo and many, many more, Clay’s legacy isn’t just in what he produced, but in the people, he affected.

Clay took a lot of pride in the careers he helped launch. He spent significant energy on these endeavours — in part, I imagine, because he always believed that he had the best job in the world, one where he got to learn more from his students than they learned from him. Clay himself said in “How Will You Measure Your Life?”:

“I came to understand that while many of us might default to measuring out lives by summary statistics, such as number of people presided over, number of awards, or dollars accumulated in a bank, and so on, the only metrics that will truly matter to my life are the individuals whom I have been able to help, one by one, to become better people. When I have my interview with God, our conversation will focus on the individuals whose self-esteem I was able to strengthen, whose faith I was able to reinforce and whose discomfort I was able to assuage — a doer of good, regardless of what assignment I had. These are the metrics that matter in measuring my life.”

This is why he viewed management as the noblest of professions — not because of managers’ ability to execute plans or make money, but because of their ability to impact the human lives of those they managed — and, by extension, their families and friends — for the better. The ripple effect of one good act, but equally of one bad act, was profound.

In reflecting on his life, I’ll remember that Clay was moved by kindness. He always put people first as he sought to support them, learn from them and improve the world with them.

Michael B. Horn, coauthor of Choosing College: How to Make Better Learning Decisions Throughout Your Life, is head of strategy for the Entangled Group and senior partner for Entangled Solutions, which offers innovation services to educational institutions. He is also co-founder and distinguished fellow at the Clayton Christensen Institute for Disruptive Innovation.