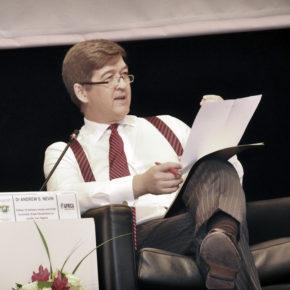 There is so much to be explored and exploited with a revolutionary technology such as Blockchain. In the latest Nigerian Fintech Survey 2017, PricewaterhouseCoopers (PwC) stated that Blockchain represents the next evolutionary jump in business process optimisation.  Andrew Nervin, Financial Service Advisory, Leader and Chief Economist of PwC, in this interview with FRANK ELEANYA expands the knowledge of Blockchain beyond the general bitcoin perception.

How do you define Blockchain?

It is a distributed ledger that has mechanism that all parties can agree on and see. In a way it is a lot of incentive, for instance in a company you have enterprise management system or ERP system that has data that every department see and they agree on. Now what Blockchain does is to allow that to extend outside of your company into the whole value-chain.

What are the other used-cases for Blockchain technology?

Where would that be useful? You have the land registry. Everyone can agree on who owns the land, what was the sequence of title, who paid who at what time? There is no dispute because every got access to the same data. There is also trade finance which is a complex product. It is also involved in shipping when something is shipped or it is received etc. So all of the players in the system, which include the banks whether two or three, plus the buyers and the shippers, clearing agents etc are all looking at the same information that is contained in the block. They are allowed to update it according to certain rules and when they have updated the block it is verified. So you see the entire history on every activity. That will be another used-case.

There are also insurance policies; you have complex policies of what exactly is insured, why it is insured, that is the beginning of the block. And then as you make claims there are those interactions that form the next part of the chain. It keeps track of it. So where it is most useful is in complex transactions. But you need to have a lot of accurate information otherwise you got many parties in the chain. And I think the thinking about why the technology is so important is that it is just going to make so many value chains – industry chains, more efficient when you have all of the parties seeing all the information at the same time in a way that they are verifying that information is accurate.

We have been encouraging them to try this out.

Because then, everyone in Lagos land registry will step forward and make sure it is clear who has title to the land. It will help drive the housing market, the office market. It will help in creating and ensure a proper mortgage system because the bank will notice that you have title to the land. The Blockchain would in our view, add another level of security and efficiency to the Lagos government efforts in urban land regulatory. They have committed to land registry and they are on course. But it is a complex thing, so we suggested to them that they try Blockchain as leapfrog. If you think about economies like Nigeria we have leapfrogged other economies in the world in things like mobile, internet. This could be a chance for us to leapfrog using Blockchain rather than run the land registry without it. But it is up to the government to decide how to go about it.

Is the Blockchain solution for the long term?

We hope so. PwC and other conversant industries see Blockchain as the biggest change in financial services. It is just a game-changer because before you never have one whole source of information about it, but this is what it brings.

The CBN setting up committee is a good thing for us because they need to understand it. If we are looking at used-cases, some of them will fall under what CBN might regulate in terms of banking supervisory roles. But there are other used-cases like the land registry where it is not going to fall under CBN. So Blockchain is going to go through many industries in different ways. I think the important thing for the CBN is it will be very hard right now with all of these fintech changes for the regulatory to keep up. I have a lot of sympathy for them. It is so many new technologies and the CBN is used to regulating banks, but now you have telcos and mobile money operators for example like Mpesa in Kenya. How do they get regulated? So it is not easy for the CBN.

But I think in this case they have taken important step to say, “We need to make sure we understand Blockchain.” I would not say it is important to regulate, what is important is that the CBN drives common industry standards that actually encourages the use of these technologies. Of course that has some aspects of regulation but the main thing is to help drive it to the industry. I think where the CBN will be very effective is by leading this sort of things to operate common industry standards. Through the Bankers Committee they did the Bank Verification Number (BVN). That has been very successful; we can all transfer money instantly. The banks have the same ten digit bank accounts now. So in Nigeria, you can transfer money instantly to NIBSS. That was because the CBN drove common standards. So it would not be to try to regulate it but to drive how the banking system use Blockchain the best and that all the banks are doing the same thing at the same time?

Do you foresee a time when the traditional banks with larger resources, not only collaborates but dominates Blockchain technology?

No, I do not think it will be the largest banks. I think it will be the banks that offer the best customer experience and also are able to use customer data the most effectively. So I actually think that fintech is a chance for smaller banks to gain market share. If you are a big bank and you are not putting out the best products or you are not leveraging the data on your customer, you are going to fall behind. We are already seeing this. We talk to the banks and we had a look at different banks’ digital maturity and some of the smaller banks are actually further ahead and they are offering better products to customers.

In a market like Nigeria the market share could change. If you go to a stable market, the bank share between the big banks has been the same for decades. But in Nigeria it moves around a lot. And that is why the banks are so competitive and are offering better products. The big bank that innovate its products will have customers coming back. But the big bank that does not innovate is going to fall behind.

You predicted that in 2030 we may likely not see physical currencies, can you elaborate on that?

I have a hard time believing it too that we are coming to a point where we have no physical cash in the world. But I think what is driving it is that using cash is expensive. But it is also a big push because if you have cash it helps crime; not only because people are selling drugs and paying cash but once you make proceeds from crime how do you get it into the banking system? So I think in 2030, there would not be cash and banks will not accept proceeds they do not know where they begin from. For the cost of handling cash, the advantage is on a new technology. But the benefit is it will reduce crime by having a cashless society.

If you look around the world in the advance countries the system is already there. In Sweden there is almost no cash but even Kenya, it is not a cashless society, but you look at how much of the volume of economic activity that goes to Mpesa it is extraordinary. Let us project thirteen years from now, I do not think there will be cash. But of course it is a prediction, I could be wrong.

How is that future going to impact financial security?

Obviously your driver’s license, you have an entitlement. The government is trying to have schemes here for bottom of the pyramid to get small social payment every month. You are not going to get that pay unless you are biometrically enrolled.

In order words Nigeria is taking the right steps for the future of financial security?

Well I guess the one concern is privacy in the world of the future. I think you are going to find in the next few years data privacy is going to become huge. I know that there are a lot of fintech that are focusing on how does the individual take back their own data. So that eventually will be where we end up. But right now when you make a purchase, when you do anything, your location is being recorded and that is data. I think w have some big complex issues but I can see us getting there.

Why I am convinced Tinubu is committed to fulfilling his campaign promises, by Faleye

If Nigeria returns to God through repentance, he will turn things around for good…