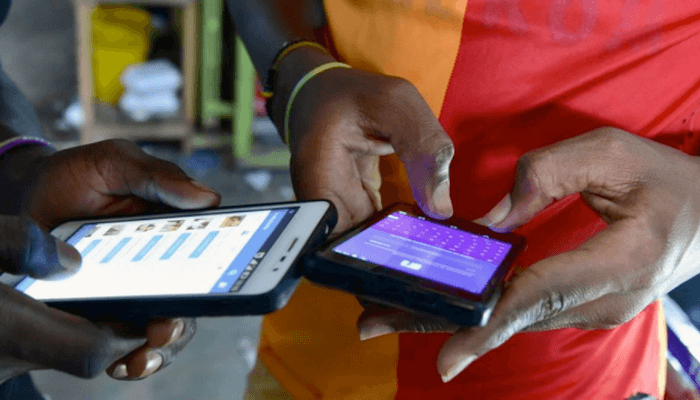 From 1892 when Nigeria’s first commercial bank was established in Lagos, the banking business in Africa’s largest economy has evolved to a point where bank customers can now complete transactions at the comfort of their palm.

As more Nigerian households increasingly have access to smartphones, especially low-income households, many more individuals and businesses are now gaining easy access to a range of price-friendly financial services.

Following the successful marriage of smartphones and financial services which is helping to give more Nigerians easy access to financial service, industry analysts believe financial inclusion would certainly not be a distant goal to achieve.

While digital banking is already a widespread trend in most cities in Nigeria, the challenge, however, for financial service providers have been to reach the unbanked population who are mostly in the rural area.

“By giving these people access to basic financial instruments and allowing them to avail easy credit, these Internet-enabled smartphones give enough power in the hands of the poor, who can now be encouraged to save and get rid of the tangles of poverty,” Neel Juriasingani, CEO and Co-founder, Datacultr, a web-based financial software solution, said.

According to Juriasingani, from creating a bank account to making payments, transactions, fund transfers, applying for loans, managing insurance, pensions, and cheque book requests, smartphones can allow people to fulfil all their financial requirements, without them having to physically visit banks or any other financial institution.

The success story of India’s financial inclusion drive which leveraged the use of smartphones holds lessons for Nigeria.

Over 332 million Indian citizens have already opened mobile phone-based financial accounts under the government’s mass financial inclusion programme, Jan-Dhan Yojana. As a result, the share of Indians with at least one financial account has more than doubled to 80 percent since 2011.

According to the World Bank, digital financial services, powered by fintech, have the potential to lower costs by maximizing economies of scale, increasing the speed, security and transparency of transactions and allowing for more tailored financial services that serve the poor.

Despite having its huge active mobile phone users, Nigeria has more 40 million of its adult population without access to a basic bank account and the 80 percent financial inclusion target by the Central Bank of Nigeria was unrealisable as the impact of COVID-19 denied more people access.

According to data by the Nigerian Communications Commission (NCC), Nigeria has about 280 million active mobile SIM cards as of March 2021 and figures from the National Bureau of Statistics (NBS) shows that 75.5 percent of mobile phone subscribers were internet-connected in 2020.

More affordable smartphones, improved distribution network, and expansion of networks by service providers are some of the reasons which Jumia expects Nigeria’s smartphone adoption to increase to 144million by 2025.
Mobile smartphone prices went from N77,867 in 2014 to N63,807 in 2016, and N34,246 in 2018, as compiled from Jumia’s mobile report of 2019.

Meanwhile, in Computer Village, Ikeja, the phone market hub in Lagos, a buyer can get a brand new budget smartphone for as low as N10,000 and pay around N6,000 for a fairly used one.

The country’s extremely poor population which was estimated by the World Poverty Clock to be over 90 million people as of March 2020 is one of the reasons responsible for Nigeria’s high financial exclusion rate.

“Financial inclusion starts with revenue generation. You cannot be financially included if you don’t generate income for yourself or simply put if you don’t have money,” Guy-Bertrand Njoya, the CFO of Metro Africa Xpress (MAX), said, adding that no one can be financially included if they don’t have the finance to bring into the system.
The slow pace of policy implementation is another reason cited by analysts responsible for the country’s 1 percent mobile money penetration. More than two years after the central bank of Nigeria gave an official nod to the adoption of mobile money, the Telco-led financial inclusion model that helped boost financial inclusion in Kenya and Ghana, the apex bank has only given licence to the smaller Telco companies- Glo and 9mobile.
Before now, only banks and licensed financial institutions were allowed to provide financial services (bank-led financial inclusion model). Although telecom operators and other fintech companies indicated interests to operate in the market, the CBN policy would not allow them.

The regulator eventually shifted because of the increasing rate of financially excluded people in Nigeria and the lack of progress in getting banks to provide financial services to people living in areas that lack access.

The apex bank has a target to ensure that 80 percent of the country’s adult population is financially included in the financial cycle by the year 2020. The CBN had in a circular on July 2018, lamented that Nigeria was not meeting any of the financial inclusion targets agreed and contained in the 2012 Financial Inclusion Strategy.

Not only was the country not meeting its targets, but it was also declining in growth. For instance, while Nigeria achieved a 60.3 percent financial inclusion rate in 2012, it declined to 58.4 percent in 2016 against a target of 69.5 percent, translating to financial exclusion of about 41.6 percent.

Even though the population of Africa’s largest economy is 2.6 percent of the total world population, the World Bank Global Findex Report 2017 estimates that 3.4 percent of Nigerians are among the global 1.7 billion adults who are unbanked and financially excluded.

“From a regulatory perspective, one basic requirement for mobile money to succeed is to create an open and level playing field that includes non-bank mobile money providers such as Mobile Network Operators (MNOs),” London-based Group Special Mobile Association (GSMA) said.

Promoting widespread financial inclusion is one of the key catalysts needed to ensure the continued development and growth of any nation, a Lagos-based analyst said.

“The multiplier effect of bringing people into a system outside of “cash-in, cash-out” is what we need in Nigeria,” Segun Agbaje, the CEO of GTBank said.