Financial inclusion: What Nigeria can learn from Ghana 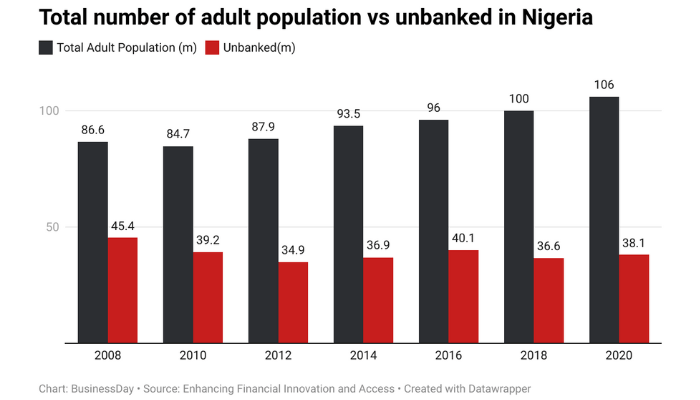 Africa’s biggest economy can take a cue from one of its neighbouring countries, Ghana, whose mobile money feature has positioned it as the only African country to achieve 100 percent access to financial inclusion on the continent.

According to the ranking contained in the 2022 State of Inclusive Instant Payment in Africa Report by AfricaNenda, Ghana is ahead of other African countries when it comes to financial inclusion.

“This feat was achieved through the successful implementation of the Mobile Money Interoperability (MMI) system which integrates all payment platforms across banks, fintech and telcos, allowing all Ghanaians to make and receive instant payments,” the report states in part.

In simpler words, Ghana’s mobile money feature permits the transfer of money among all mobile money networks irrespective of their network types.

To convert cash into mobile money, Ghanaian customers can visit specified agents and give them a sum of money that is then deposited in their mobile money account, according to an article by Deutsche Bank, a German multinational investment bank and financial services company “This money can be sent via phone to another user who can subsequently visit an agent who will convert the mobile money back into cash,” the Bank stated.

Mahamudu Bawumia, the vice president of Ghana said as a government, they realised it was imperative to adopt digital innovation to transform the economy

“It is not a venture without opposition, and there are huge costs associated with getting to our destination. However we are unwavering as we are convinced the benefits will outweigh the costs, and these benefits are already beginning to show,” Bawumia said.

He also added that so far, they have introduced some interventions such as mobile money interoperability, digital renewal of National Health Insurance, implementation of the digital address system, the national ID card, paperless port system, QR-Code, among others.

“We are already seeing the impact of these digitisation initiatives including efficient public service delivery by all Ministries, Departments, and Agencies on the Ghana.gov portal, combating corruption by removing the middle man, and also ghost names in many transactions, bringing more Ghanaians into the formal sector and driving domestic revenue mobilisation, amongst others.”

Launched in 2018, the system through the Ghana Interbank Payment and Settlement Systems Limited (GhlPSS) helps in eliminating the challenges, complexities and inconveniences associated with transfers across the various mobile money networks in the country.

These include difficulties in opening bank accounts, high costs in maintaining a bank account relative to customers’ income levels, and financial literacy.

This move has placed Ghana on the global stage as one of the biggest mobile money markets and the fastest-growing one in Africa.

According to the Bank of Ghana, the country’s mobile money accounts grew to 40.9 million in February 2021 from 32.7 million in the same period of 2020.

The increase in mobile money accounts has placed Ghana among the top five countries in the Sub-Saharan Africa (SSA) region that recorded the most growth in bank accounts within a period of 10 years.

Data from the 2021 Global Findex report by World Bank, showed that the percentage of the adult banked population increased by 38.8 percentage points to 68.2 percent in 2021 from 29.4 percent in 2011.

“Many economies in SSA saw growth in mobile money accounts accompanied by a decline in financial institution accounts,” the report stated.

It identified Benin, Cameroon, the Republic of Congo, Gabon, Ghana, Malawi, Togo, and Zambia as the countries that each saw double-digit growth in mobile money accounts.

“GhIPSS has since improved services by adding other services like Proxy Pay, Internet Gateway Payment, Request to Pay and the Universal QR Code dubbed GHQR, which can be linked to both bank accounts and digital wallets, with affordability as the key driving force,” said Archie Hesse, chief executive officer at GhIPSS

GhIPSS, in collaboration with the banks, have also come up with a bank-wide wallet called GhanaPay to ensure that the banks also play a role in the mobile money space with the view to bridging the financial inclusion gap, he added.