Friday 27 December, 2019 would remain indelible in the annals of the Nigerian Oil and Gas Industry. It was the day the much-awaited Final Investment Decision (FID) of Train 7 of the Nigeria Liquefied Natural Gas Limited (NLNG) was taken.

FID refers to the decision by the board of directors of a company to proceed with the investment for a project, having among others, met sufficient financial resources to deliver on it. Similarly, an LNG train refers to a liquefaction plant that often consists of several parallel units arranged sequentially. The NLNG plant in Bonny Island already has 6 trains/units, leaving the 7th as the subject of the FID.

Established by an NLNG Act, the NLNG Limited was incorporated as a limited liability company on May 17, 1989 with the aim to harness a quantum of Nigeria’s vast gas reserves of about 200 Trillion Cubic Feet (TcF). Currently, the company boasts of the capacity to produce 22 million tonnes per annum of Liquefied Natural Gas, and 5million tonnes per annum of Natural Gas Liquids, that is, Liquefied Petroleum Gas (LPG), otherwise referred to as cooking Gas, and Condensate. The train 7, which FID was taken, is expected to boost the production capacity of the current six-train NLNG by 35 percent, which translates to 30 million tonnes per annum.

The NLNG remains one of the major success stories of the Nigerian Oil and Gas Industry, raking in billions of dollars to the coffers of the Nigerian Government annually; helping to reduce Nigeria’s gas flaring profile from 65 percent to below 25 percent, even as it also supplies about 40 percent of the cooking gas consumed in the country.

Speaking at the occasion, Mele Kyari, group managing director , Nigerian National Petroleum Corporation (NNPC ), who made the announcement of the FID of Train 7 of the NLNG Limited, listed the benefits of the proceeding with the construction of the 7th train of the six-train plant, which he noted included: an affirmation that Nigeria remains a prime foreign investment destination; generation of $20billion to the Federal Government coffers and provision of 10,000 direct and 40,000 indirect jobs to Nigerians. This could not have come at a better time to help government deliver on its promises.

Reflecting on the rapid consummation of the processes leading to the FID of Train 7, it is pertinent to exalt the leadership role of the NNPC boss, who has demonstrated immense dexterity to actualize major sectoral decisions in recent times. He spared no time to express the commitment of the industry to buoy the oil and gas sector’s contribution to the national economy, always emphasizing his regard to the ordinary Nigerians as forming the fulcrum of the shareholders of corporation.

As he promised during his declaration of the FID on behalf of other shareholders of the company, his team would work with partners to bring in more projects that would add value to the nation’s upstream sector, particularly in the gas processing sub-sector.

This expression of commitment by the NNPC is soothing as it indicates that other gas projects, which are no less of high promise to boosting Nigeria’s economy, may receive desired attention soon during his tenure. 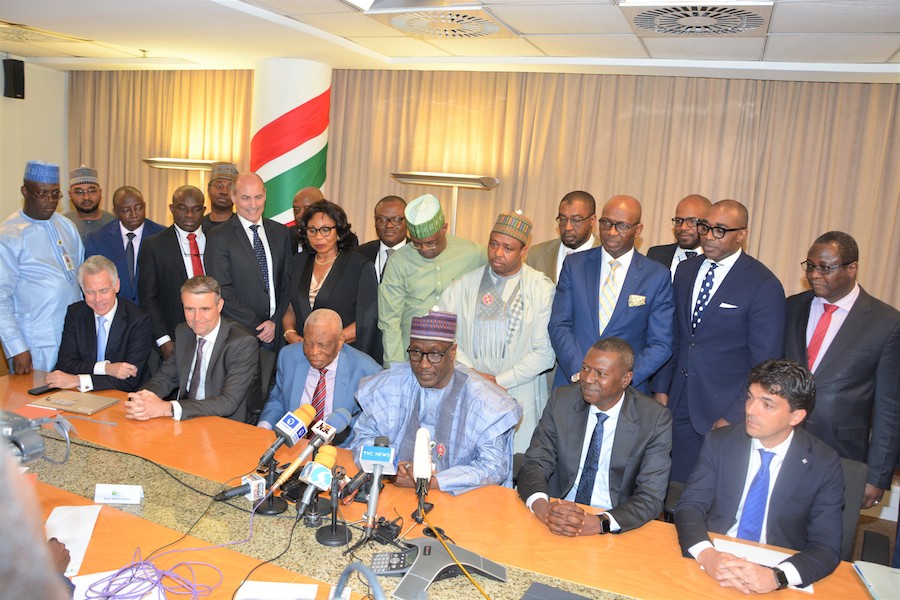 Among these are the Brass LNG, as well as, Olokola LNG, otherwise called OK LNG. The other is the integrated gas processing facility in Delta Sate. Each of these projects is capable of generating tenths of thousands of jobs in the country; reduce gas flaring and boost the nation’s economy with the concomitant effect of enabling Government to provide for the needs of Nigerians nationwide.

As NNPC boss noted at the occasion, kudos must be given to President Muhammadu Buhari, whom he stated gave his utmost support to the project. This, however, might not be a surprise to Nigerians as some of the nation’s refineries were constructed during his tenure in the 1980s as Minister of Petroleum.

As the board of directors of the NLNG took the FID of the Train 7 of the company’s plant, Nigerians in all walks of life cannot wait to witness its impacts on the nation’s economy and their respective wellbeing. It is a deserved kudos to all that have worked tirelessly to see that historic moment passed eventfully.

According to Tony Attah, managing director and chief executive officer of NLNG, “Train 7 is the crux of a growth agenda, which will ensure the company’s position as the 5th major supplier of global LNG is maintained, increasing value to its Shareholders and other stakeholders, as well as, further reducing the gas that would otherwise have been flared, in fulfillment of its vision of ‘being a global company, helping to build a better Nigeria’”.

He further remarked that “over 12, 000 jobs will be created during the peak of construction, trade and commercial activities within the Niger Delta region equally receiving a boost as a result. The project will also support the development of local engineering and fabrication capacity in the country. Other opportunities for local content include procurement, logistics, equipment leasing, insurance, hotels, office supplies, aviation, haulage, and many more.”

Also speaking on the part of investors, Henry Bristol, who represented the managing director of Shell, said Shell was committed to the project and the opportunities it provides for Nigeria.

On his part, Mike Sangster, managing director of Total, said the company was very pleased to be part of the decision to proceed with the Train 7, which he described as great and fantastic.

Peter Costello, managing director of ENI, who was also represented, expressed the commitment of his company for the decision to go ahead with the Train 7 project, adding that the decision was in tandem with the celebratory mood of the season.

It would be recalled that the Mele Kyari had, at various occasions in the year, expressed commitment to having the FID taken before the end of 2019.

The Train 7 would boost the production capacity of the current six-train NLNG by 35 percent from 22 million tonnes per annum (MTPA) to 30MTPA and increase its competitiveness in the global LNG market.

On December 13, 2019, NLNG signed the first Basic 20-year term of Gas Supply Agreements (GSAs) for NLNG Train 7 with Joint Ventures (JVs) for the supply of feed gas to Train 7, closing out a condition necessary for taking of the Final Investment Decision (FID).

On September 11, 2019, the company issued a Letter of Intent for the Engineering, Procurement and Construction (EPC) Contract of the Project to SCD JV Consortium. SCD JV Consortium is made up of Saipem of Italy, Japan’s Chiyoda and Daewoo of South Korea.

On March 22, 2019, NLNG and Nigerian Content Development Monitoring Board (NCDMB) signed off the approved plan for Nigeria Content (NC) for NLNG’s Train 7 project which will ensure the delivery of value and benefits to the Nigerian economy.

Simbi Wabote, executive secretary of the Nigeria Content Development and Monitoring Board (NCDMB) said the benefits of the Train 7 project would extend to site civil works on roads, piling, and jetties, 100 per cent local procurement of all low and high voltage cables, non-cryogenic valves, protective paints and coatings, sacrificial anodes and many others from local manufacturing plants.
The target, according to the NCDMB boss, is to assemble over 70 per cent of all non-cryogenic pumps and control valves in-country, while other spin-off opportunities include logistics, equipment leasing, insurance, hotels, office supplies, aviation, haulage and many more. 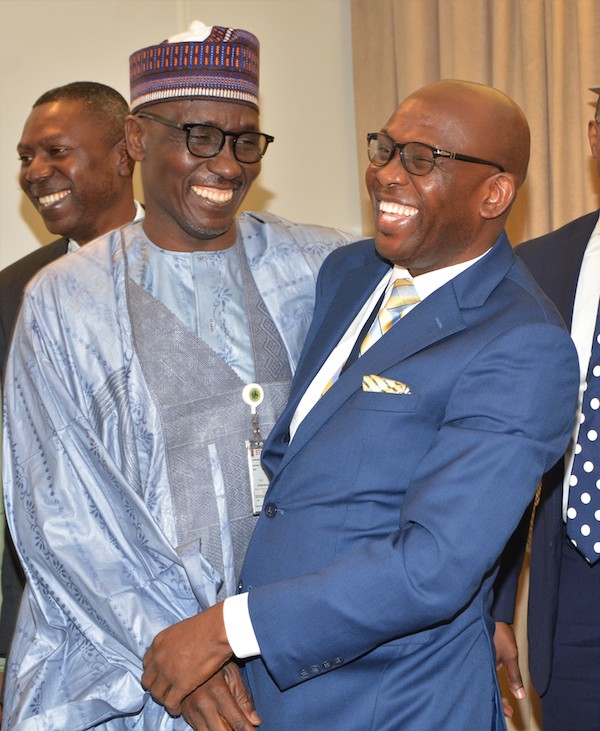 According to him, the schedule of the NOGICD Act set the minimum engineering man-hours for Front End Engineering Design and Detailed Engineering on LNG facility at 50 per cent.

Minister of State for Petroleum Resources, Timipre Sylva, had urged stakeholders connected with the NLNG Train-7 project to fast-track actions related to it.

He said the project is one of his focus areas to put an end to the drought of FIDs in the oil and gas industry in the last few years.”

He said apart from the job opportunities and the accruable revenues from the multibillion-dollar Train-7 project, there is the additional tonnage of LPG to be produced from Train-7 as a key benefit to reduce importation of LPG into the country”.

He is also excited that Train-7 project attracts other upstream gas supply projects required to keep the LNG train busy. The project opens up other development opportunities for some gas fields in the shallow and deep offshore acreages such as HI, HA, HK, and Opoukunou-Tuomo fields,” he added.

What is new about Ibom Blue Sea Science and Technology project?

OPEC+ oil supply deal in jeopardy as Mexico threatens to…