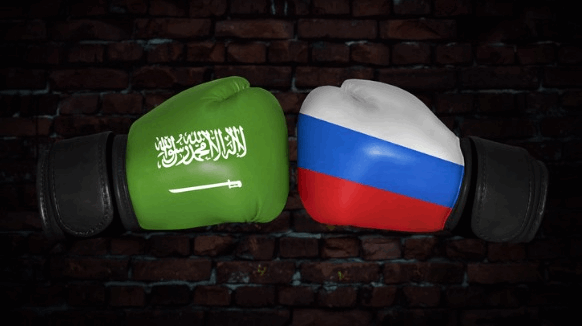 Effective Wednesday, the price war between the two world’s largest oil producers, Saudi Arabia and Russia went into top gear with the consequences weighing heavily on Nigerian revenues, as Nigeria depends solely on crude oil for her foreign earnings and economic growth.

The two countries are set to increase production dramatically this month, after an agreement between OPEC and its allies to lower output expired at the end of March.

Prices could continue to fall as producers flood the market with increased production levels that are likely to last “until June at least,” Ravi Krishnaswamy told CNBC.

Oil prices have fallen more than 60 percent since the beginning of 2020 amid the coronavirus crisis and a price war led by Riyadh and Moscow. The price of crude fell to as low as $23.03 per barrel this week, a situation that has also made Nigeria adjusts its pump price to N123 a litre.

Analysts say there are possibilities that the price could still be adjusted further down, depending on how the price war turns out.

Saudi Arabia could potentially claim the top spot. State-owned Saudi Aramco said in a statement last month that it would provide 12.3 million bpd of crude oil in April. That is nearly 2 million bpd more than an estimate for March, according to Refinitiv Eikon data

Russia’s Energy Minister Alexander Novak said his country could increase its production by 200,000bpd to 300,000bpd in the short term, and 500,000bpd in the longer term. Its output was around 11.3 million bpd in February.

The crash in crude oil prices means volume is especially important for oil-dependent Nigeria, and as there will be no OPEC output limits to adhere to this month after, the country can pump at will.

The current drop in oil prices is hitting the country hard, making a big dent on government revenues and threatening the viability of upstream projects.

Experts are however of the view that even if every country decides to produce at will, it may not be able to produce beyond 2.3million barrels per day giving the fact that the country has been too lackadaisical about exploration activities. To achieve this may take a few years.

They also say even at this volume of production Nigeria would have to sell it commodity at a highly discounted rate to be able to create market for it, and the revenue from it may not make so much impact on the economy

According to Petroleum Economist, the country is bracing up to take a big hit from the collapse in oil prices resulting from the end of the OPEC+ agreement and the Covid-19 pandemic. Nigeria is particularly vulnerable as it has yet to fully recover from the previous crash in 2014.

Nigeria’s 2020 budget is based on an anticipated oil price of $57/bl, but the decline in the price of the Brent benchmark crude has forced the government to revise this to $30/bl while maintaining proposed production volumes at 2.18m bl/d, condensate inclusive.

Diran Fawibe, chairman/chief executive of IESL/Doris Joint Venture, said presently Nigeria could hardly produce up to 2.6 million barrels per day, which it did just a few times in the past. He, however, stated that if the country was able to improve national production through exploration it might be able to produce above 2 million bpd. This will, however, depend on market availability while the crude is also discounted.

The country currently does not have the capacity to ramp up beyond 2m bpd, Seye Fadunsi, former executive director of Pillar Oil, said.

Even if the Petroleum Industry Bill (PIB) is passed today and investors come into the industry for them to start drilling, development of fields and production will take about two to three years to start seeing the result, he said.

Abiodun Adesanya, managing director of Degeconek, said without the price war between Saudi Arabia and Russia, Nigeria had never been able to sustain it 2.2 million quota allocation given to it by OPEC, though it had always tried to move closer to it. This is because of constant infractions on the pipeline infrastructure.