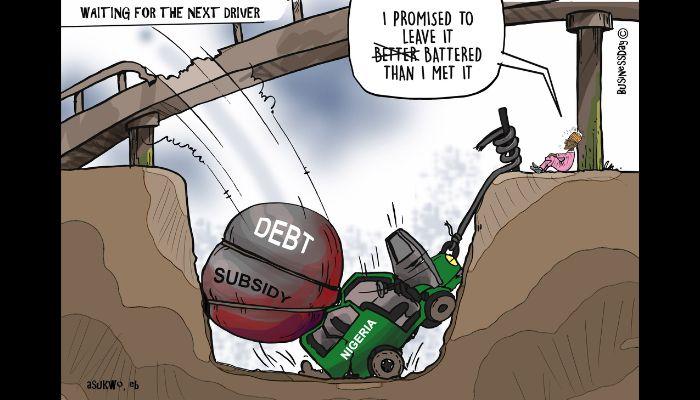 Petrol subsidy and other major expenses being incurred by the Federal Government are taking a bite out of the country’s declining foreign exchange earnings.

Nigeria is in the middle of a serious crunch that has strained its forex reserves, stifled the value of the naira, spooked foreign investors, and raised the cost of doing business in the import-dependent economy.

“The official foreign exchange receipt from crude oil sales into our official reserves has dried up steadily from above US$3.0 billion monthly in 2014 to an absolute zero dollars today,” Godwin Emefiele, governor of the Central Bank of Nigeria (CBN), said at an industry event.

Analysts and industry operators identified four activities that are eating into the government’s already lean FX income, and if discontinued, would free up more cash for the government to spend on critical infrastructure that would stimulate inclusive, robust and sustainable growth.

Findings showed Nigeria’s forex challenges became obvious in 2016, when oil revenue, which accounts for more than half of totally collected revenue, declined significantly owing to a collapse in global oil prices and a plunge in domestic oil production volume attributed to activities of militants in the oil-rich Niger Delta.

While oil prices rebounded, Nigeria’s oil production struggled to recover from an average of 2 million barrels per day (bpd) in 2016.

Calculations by BusinessDay showed the country’s output averaged 1.34 million bpd in the first 10 months of 2022 against the 2022 budget benchmark of 1.88 million bpd, costing the nation about 161.58 million barrels in lost production worth about $16.7 billion.

The country has also been unable to meet its OPEC quota since November last year at a time of rising oil prices and severe revenue and FX woes at home.

“For other countries, the rally in oil prices means more foreign exchange reserves, higher revenues, and potential economic growth. In Nigeria’s case, this blessing could turn into a curse,” Lukman Otunuga, senior research analyst at FXTM, said in a note.

Nigeria has over time held on to the policy of capping the prices at which it sells refined fuel in the domestic market. This is irrespective of whether Brent crude — the benchmark of oil prices at the international market — increases or not.

This makes Nigeria’s state-owned oil company remit a small amount of money and sometimes zero amount into the federation account.

Despite its strain on Nigeria’s fiscal, the controversial petrol subsidy regime has also remained, with the latest end date set for June 2023. In the meantime, the practice continues to dig holes in the government finances and is set to gulp a quarter of the total budget for 2023.

President Muhammadu Buhari, who has dilly-dallied on scrapping the subsidy, shocked everyone during the presentation of the 2023 budget last October when he admitted it was unsustainable. That’s after spending N7.3 trillion subsidising petrol.

This amount is more than four times the amount it spent building new schools, health centres and equipping new science labs during the period.

In September 2022, the Economist wrote a report detailing how Nigeria is a “conspicuous absentee from this year’s merry petro-party” caused by the Russia-Ukraine war.
“Price controls are the biggest reason the boom is ruining the public purse,” the Economist said about Nigeria.

Under renewed pressure from Nigerians trying to ditch expiring naira notes, Nigeria operates a multiple foreign exchange window where the US dollar can be sourced at a rate of N444/$ and another where it can be bought at a weaker rate of N780/$.

While the hard peg has the benefit of dampening imported inflation, its disadvantages include reducing the naira amount of oil revenue that goes to the federation account and undercharging duty on imports.

“A possible solution to the foreign exchange crisis in the market is for the government to ditch the failing hard peg policy and allow the naira to weaken in line with the long-term inflation rate of the currency and that of the dollar,” said Bode Agusto, chief executive officer of consulting and credit rating firm, Agusto & Co.

Agusto says Nigeria may also struggle to fully float the currency due to the volatility of its main source of dollar inflows – crude oil exports.

Since the government is cash-strapped, Nigeria has resorted to huge borrowings to fund ballooning budgets thus; this has made its debt servicing obligations to widen.
New data seen by BusinessDay show Nigeria’s borrowing costs on local bonds jumped to a five-year high, adding pressure to a debt service burden that eats up more than two-thirds of revenues in Africa’s biggest economy.

As of August, debt service consumed 84 percent of Nigeria’s revenues, and the World Bank projects it could rise to 169 percent of income by 2025 if the government fails to implement fiscal reforms.