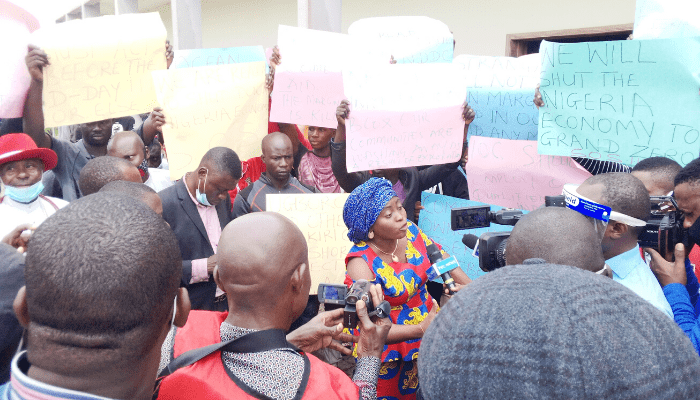 A group in Nigeria’s oil-rich Niger Delta region, Movement for the Development of Itsekiri Oil/Gas Producing Communities, on Monday vowed to disrupt oil and gas production in their area if the Federal Government does not reverse the current bidding for 57 marginal oil fields and other pressing matters.

The group made this vow in a protest held at Ugborodo community in Warri South West Council Area of Delta.

The protesters carried various placards with inscription like: “We Will Shut the Nigeria Economy to Ground Zero”, “Strangers Will No Longer Own Marginal Field In Our Land”, “We Seek Federal Employment In Our Land”, “The IOCs Should Be Prepared, Few Days to Go”, and so on.

The group, in statement signed by Isaac Botasan, its chairman, called on the Federal Government to immediately halt the current process of bids for the 57 marginal fields and come up with new modalities, where competent companies owned by Itsekiri sons and daughters, would be given “right of first refusal on fields in their homeland, before being thrown open to outsiders”.

“If competent companies owned by Itsekiri indigenes are not considered by DPR for the 57 marginal fields with immediate effect, we will shut down operations of the multi-national oil and gas companies (IOCs) operating in our homelands,” the group said.

It also asked the Federal Government to “direct the relevant MDAs/IOCs to embark on large scale shore protection/sand-filling projects in Itsekiri riverine/oil producing communities” and “institute process for the facilitation of the abandoned age-long Omadino-Escravos Road”.

It demanded the oiling of “machineries for commencement of the Koko/Ogheye Road Project, which has remained a mere campaign tool for successive administrations, despite its strategic importance to the socio-economic development of the Niger Delta and the South-West”.

The group warned that it was eagerly awaiting speedy action on the aforementioned demands above to avert fresh crisis in the oil and gas industry.