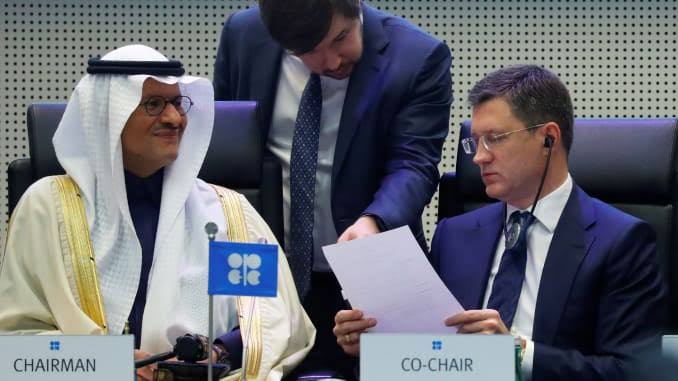 Share
OPEC+ delayed a meeting aimed at ending the oil price war, as Riyadh and Moscow trade barbs about who’s to blame for the collapse in oil prices.
The alliance is tentatively aiming to hold the virtual gathering on April 9 instead of Monday as it previously intended, a delegate familiar with the matter said.
Producers need more time for negotiations, said another. Beyond the alliance, Saudi Arabia and Russia have indicated they want other oil countries to join in any output cuts, complicating efforts to call a meeting, the delegate said, asking not to be named discussing diplomatic matters.
The delay came hours after Saudi Arabia made a pointed diplomatic attack on Russian President Vladimir Putin, opening a fresh rift between the world’s two largest oil exporters and jeopardizing a deal to cut production.

In a statement early on Saturday, the Saudi Foreign Minister Prince Faisal bin Farhan said comments by Putin laying blame on Riyadh for the end of the OPEC+ pact between the two countries in March were “fully devoid of truth.” 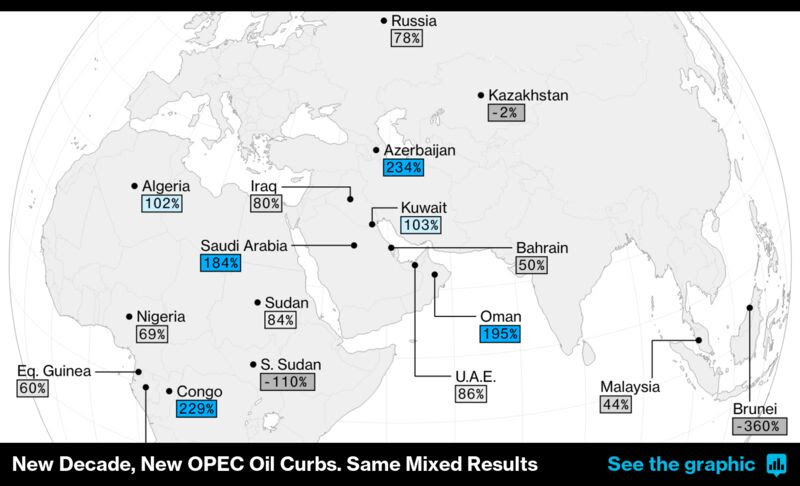 The direct criticism of Putin, echoed in a statement by Energy Minister Prince Abdulaziz bin Salman, threatens a new agreement to stabilize an oil market that’s been thrown into chaos by the global fight against coronavirus. President Donald Trump had devoted hours of telephone diplomacy last week to brokering a truce in the month-long price war between Moscow and Riyadh.

“We always remained skeptical about this wider deal as U.S. producers cannot be mandated to cut,” said Amrita Sen, chief oil analyst at consultant Energy Aspects Ltd. “If so, Russia doesn’t come to the table. And if everyone doesn’t cut, Saudi Arabia’s long held stance is that they will not cut either.”

The prospect of a new deal spurred a 50% recovery in benchmark oil prices last week as traders saw some relief from the catastrophic oversupply caused by a lockdown of the world’s largest economies, in a bit to halt the coronavirus pandemic.

With billions of people forced to stay at home, demand for gasoline, diesel and jet has collapsed by about as much 35 million barrels a day.

“Russia was the one that refused the agreement” in early March, the Saudi foreign ministry said. “The kingdom and 22 other countries were trying to to persuade Russia to make further cuts and extend the agreement.”

Sponsored by Trump, who’s fretting about the future of America’s shale industry, momentum for a new agreement had built in recent days.

A delay is “not a good sign,” said Ayham Kamel, head of Middle East and North Africa at the Eurasia Group consultancy. “This entirely plays negatively for the discussions.”

“Part of Putin’s comments are about saving face and also justifying why the oil price crashed and partly to deter criticism from the U.S. Putin doesn’t want to be blamed for any losses in the U.S. energy industry.

It seems to me that there’s both a defensive effort to shield from criticism abroad for both the Saudis and the Russians,” Kamel said.

Putin acknowledged the need for a deal on Friday, saying Russia was willing to contribute cuts. This could be 1 million barrels-a-day if the U.S. joins, according to four people familiar with sentiment in the industry.

But he also put responsibility for the downward spiral in prices on Saudi Arabia.

“It was the pullout by our partners from Saudi Arabia from the OPEC+ deal, their increase in production and their announcement that they were even ready to give discounts on oil” that contributed to the crash, along with the coronavirus-driven drop in demand, he said.

“This was apparently linked to efforts by our partners from Saudi Arabia to eliminate competitors who produce so-called shale oil,” Putin continued. “To do that, the price needs to be below $40 a barrel. And they succeeded in that. But we don’t need that, we never set such a goal.”