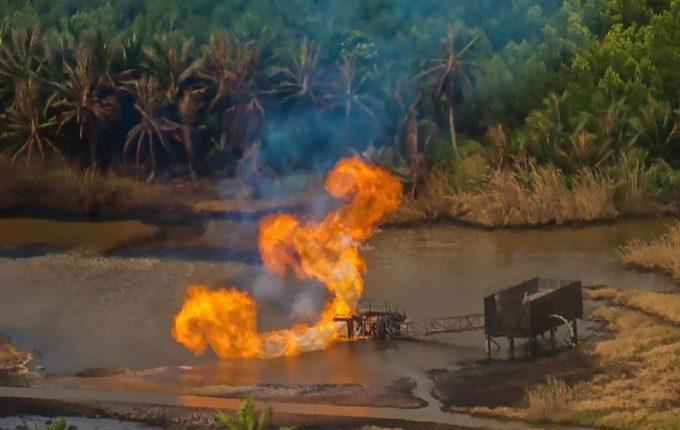 A fire outbreak at an oil well, Ororo1, located on Oil Mining Lease (OML) 95, in  Niger Delta, following an explosion on Saturday has continued to burn as all efforts to contain has thus far proved abortive.

The fire incident was said to have broken out while a Work Over Jack Up barge was carrying out wireline operation on the well, according to the National Oil Spills Detection and Response Agency (NOSDRA).

The company has engaged Haliburton and Chevron Nigeria Limited to help in extinguishing the fire and estimates that it will take six weeks to quell it.

The well is alleged to be belonging to Guarantee Petroleum and Sirius Petroleum joint venture. It is located in a shallow water in Ondo and is linked to the Ondo State Government. It was one of those whose license was allegedly once considered by the Federal Government for revocation at a time.

Sirius has a 40 percent economic interest in the Ororo oil field with indigenous partners Owena Oil & Gas (27 percent) and Guarantee Petroleum (23 percent). This field is adjacent to Mina, West Isan, Ekwan, Eko and Parabe fields that are operated by U.S. oil giant Chevron.

Chevron had in the 1980s drilled Ororo-1 well and discovered hydrocarbons in seven sand reservoirs of D1 to D5, F and G with two of the four reservoirs tested producing oil (D3 and G) while two others (D4 and D5) producing condensate.

Given results at adjacent fields, Sirius believes that additional reservoir intervals may be encountered below the current total depth of the Ororo-1 well,” said Sirius, which has partnered with operational partners Schlumberger and Add Energy in the Ororo oil fieldwork program.

Meanwhile, Brent Crude prices also surged on Monday, by 7.60 percent at $34.93, as producers from OPEC+ and North America signalled accelerated production cuts and/or curtailments in view of the low oil prices, high inventories, and still low oil demand around the world.

However, evidence of recovering oil demand began to emerge over the past week. Last week, the Energy Information Administration reported a crude oil inventory decline of 700,000 barrels for the week to May 8—the first drop in commercial inventories in 16 weeks. In gasoline, the EIA reported an inventory draw of 3.5 million barrels, after a draw of 3.2 million for the previous week, which fueled hopes for demand recovery. Gasoline production averaged 7.5 million bpd, versus 6.7 million bpd a week earlier.