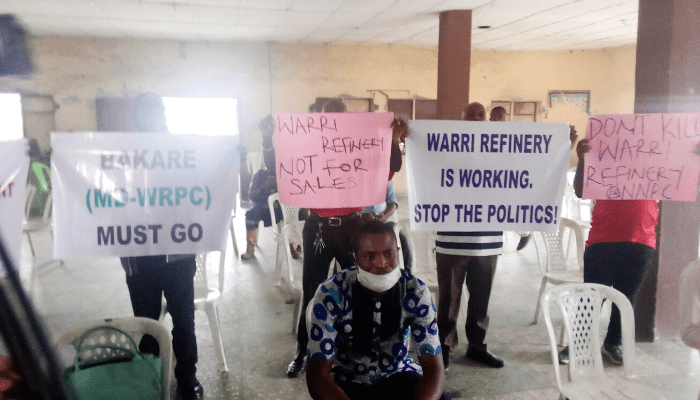 The protesters who came out in their numbers expressed their displeasure with the management of the Nigerian National Petroleum Corporation (NNPC) and WRPC over what they termed as maltreatment, marginalization and subsequent sacking of their people who have worked for the WRPC/NNPC for more than 15 years as casual workers.

They said it was disheartening for NNPC to lay off workers even when President Muhammadu Buhari had directed that no employee in any public establishment should be sacked during this trying time when the whole world is battling with the COVID-19 pandemic.

They therefore demanded the immediate reinstatement and improve working condition of their kinsmen who they said were unjustly sacked, stressing that if this demand is not met they will shut down all oil and gas operations in the Nigerian Gas Company, WRPC, and PPMC.

“We are ready to take on the NNPC this time around and we will deploy all available means within our reach,” the communities said.

They also demanded the conversion of casual staff who have worked for more than 15 years in WRPC, to full staff.

“There is no gain saying that NNPC management has indeed been wicked to us and our people over the years, even up till recent times, when they carried out mass employment in NNPC. They refused to consider our people, yet it has been these children of ours that continue to train all the previously recruited staff,” they added.

The host communities called on the leadership of the National Assembly to reinstate all their sacked workers since they had petitioned the corporation to the green chambers for NNPC to regularize their job after spending over 15 as casual workers.

According to the communique, “Our sons and daughters have been (and still being) used as casual workers for over 42 years without consideration by NNPC management to regularize them, which prompted us to join them in taking the issue to the National Assembly.”

On the newly recruited staff by the NNPC, the host Communities lamented that they were not considered in the recruitment process where 1050 persons were employed.

“We are using this medium to call on all Nigerians whose sons and daughters were announced to have been employed by the NNPC earlier this year, not to allow their children to step foot on our soil in the hope of resuming work, because we can no longer guarantee the safety of the new recruits pouring into our communities to be gainfully employed while our children are made to serve them,” the communities warned.

They also called on the Federal Government to discontinue the $2.5 billion Ajaokuta-Kaduna-Kano (AKK) gas project or they will mobilize fully to shut the operations of the Nigeria Gas Company in their lands.