Billed to be the world’s biggest single-refinery train at 650,000 barrels per day capacity (bpd), the Dangote Petroleum Refinery could meet Nigeria’s, if not Africa’s refining need but would slug it out for market share with a new $20bn Chinese refinery eyeing the African market.

The Chinese government is shutting almost 500,000 bpd refining capacity by independent refiners commonly called ‘teapots’ in Shandong Province, to make way for a huge $20-billion refinery and petrochemical complex according to a Reuters report.

These teapot refiners have previously sold their refined products in China but last year the government announced plans to give them export quotas, a move that pit them against state-held giant refiners in direct competition for oversees market. Now it is putting them out of business altogether to take on the overseas market in an organised fashion.

China exported 51,000 Metric Tonnes of gasoline to Nigeria in January last year, the second destination after Togo’s 50,000MT order in April 2018. It found the market sufficiently attractive for its largest petrol exporter, PetroChina to set up shop in Nigeria.

According to a report by energy intelligence firm, SP Platts, China’s petrol exports to African countries is growing with Mozambique and South Africa climbing to the top 10 destinations in January last year, receiving 147,000 mt and 82,000 mt of petrol, respectively.

The powers that be in China have for years been planning a large scale refinery that will process all that crude after emerging world’s largest buyer of the commodity. It now looks set to back the ambition with cash to reinvigorate its ailing economy which took a beating from COVID-19.

The refinery will have a capacity to process 400,000 bpd and would have an ethylene plant producing 3 million tons per year which will serve the country’s growing overseas market especially in Africa when it is completed in 2024.

This development signals the competition coming for a piece of the African refined petroleum market. A recent PwC Nigeria report puts  Africa’s oil production at 8.1 million bbl/d, 8.7% of global production, but exports exports 6.8 million bbl/d, or the equivalent of 10.1% of global exports. Since Africa exports the bulk of its crude, the market for refined products is huge in Africa.

Nigeria alone requires over 47million litres for road fuel daily according to S&P Global Platts assessment of Nigerian imports and its rickety refineries, burgeoning population and a government unsure if it wants to get out of subsidising petrol, makes it a premium market for refiners.

But China’s effort to build this massive refinery could put the Dangote Refinery in a precarious position unless it benefits from state protection. Nigeria has invested too much political capital not to see the refinery succeed, and its founder’s massive record of philanthropy and investments in the country which suggests he is in this thing with both feet is the type of commitment most governments get behind.

Dangote Refinery is a planned 650,000 bpd refinery with 838 KTPA Polypropylene Plant and is billed to be the world’s second largest Urea Plant at 3 Million Tons per annum.

It would have the largest sub-sea pipeline Infrastructure in any country in the world at 1,100 Kms to handle 3 Billion SCF of gas per day. In addition it would have world scale gas treatment stations, world class petrochemical complex

The frequent use of the description ‘World’ mirrors the outsize ambition of its Kano-born billionaire founder.

Though Nigeria’s true petroleum products demand is the difference when adjusted for smuggling outside its porous borders against unaudited data from the Petroleum Products Price Regulatory Agency (PPPRA), a government agency that maintains a choke-hold on pricing, Dangote Refinery plans to meet 100 percent of Nigeria’s petroleum import requirement. 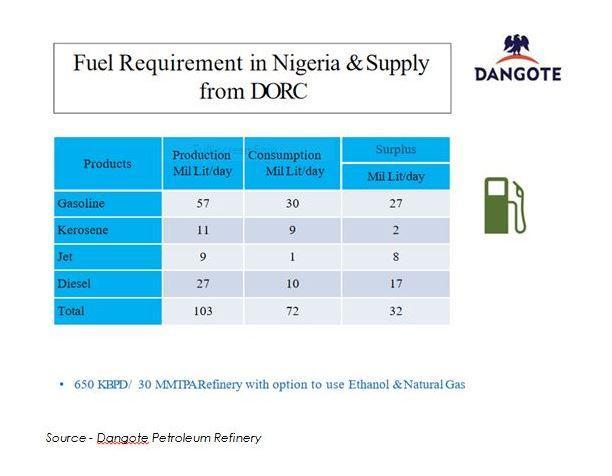 Dangote and his partners would be separated from a whopping $12billion to realise this dream but would create a market for millions of barrels of Nigeria’s crude currently stranded atop vessels searching for elusive buyers.

However, if the Nigerian government legendary cavalier attitude towards private investment becomes a threat, the strategic location of the refinery in a Free Trade Zone offers it the option of selling across the African market.

And that’s when the gloves will come off.