Crude oil prices have risen nearly 45 percent from January’s price of $54.77 per barrel to the current $80.12 as of Tuesday, but Nigeria’s petrol subsidy costs have risen 10 times faster at 488 percent, wiping out the gains of higher oil prices.

The Federal Government spent an estimated N149.28 billion subsidising petrol in August, an increase of 488 percent compared with the N25.37 billion spent in January.

“The economic case for the removal of Nigeria’s fuel subsidy regime is mounting by the day and the present administration seems undecided on how to proceed,” Joe Nwakwue, former chairman, Society of Petroleum Engineers (SPE), told BusinessDay.

A higher oil price is a double-edged sword for Nigeria, who on one hand hopes for higher oil prices to be able to implement its budget and on the other hand spends more to maintain an expensive petrol subsidy regime when oil prices go up.

Between January and August, a total of N905.27 billion has been incurred as subsidy cost, according to presentations to Federation Account and Allocation Committee (FAAC) meetings seen by BusinessDay.

Analysts have long said the subsidy cost is denying the country value that could have accrued from higher oil prices.

The UN Children’s Fund (UNICEF) says Nigeria’s 13.2 million out of school children are the world’s highest. But the cost of subsidising petrol is 10 times larger than the entire 2021 budget of N94.4 billion meant to pay for free Universal Basic Education.

The implication of this is that Nigeria is spending less money providing basic education than it spends subsidising the cost of petrol, which experts have severally described “as economic waste amid scarce resources.” 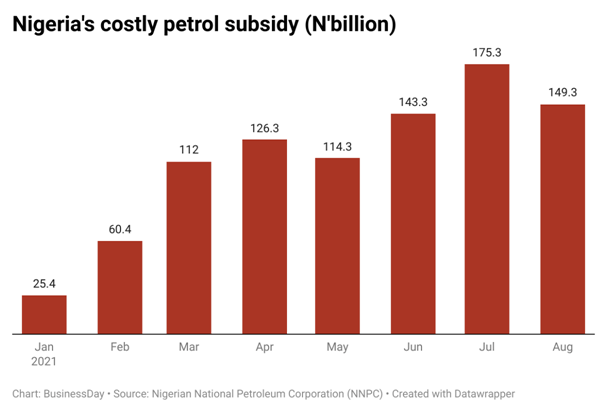 This also means less investment into the healthcare sector where in the last 56 days, resident doctors across public health facilities in the country have been on strike demanding higher pay from the government.

Although the recently signed Petroleum Industry Act (PIA) provides for the deregulation of the downstream sector, President Muhammadu Buhari had ordered that petrol subsidies remain in place for the next five to six months to enable the government carry out wide consultations before reaching a final decision on the issue.

With oil prices soaring, experts say the Federal Government may have to start borrowing to sustain subsidy payments as more volumes of imported petrol get smuggled across the border where it is sold for twice the pump price in Nigeria.

“The cost of stopping smuggling is getting higher than the cost of subsidy, which is unsustainable,” Niyi Awodeyi, CEO at Subterra Energy Resources Limited, said.

The Federal Government had mobilised some federal agencies like the Customs, the Economic and Financial Crimes Commission (EFCC), the Police, Civil Defence Corps and others, to curb the menace of fuel smuggling, but it is not clear how much this has had.

Smugglers are constantly devising new tactics to outsmart the system and create other routes of transporting petroleum products to neighbouring countries where they sell at higher prices.

“The fuel subsidy is a mess, a mess that President Buhari, who marketed himself as a mess cleaner, has had problems with cleaning up,” noted Awodeyi, saying, “We are yet to see any significant changes either in the pattern of petrol consumption or subsidy payments.”

Several efforts to reach EFCC’s spokesman Wilson Uwujaren through calls and text messages proved abortive as at close of business on Tuesday.

Over the years, Nigeria, Africa’s top oil exporter, has made producing its own fuel a priority, but efforts to revamp its refineries have failed, leaving it almost entirely reliant on imports.

ExxonMobil-Seplat deal – A timeline of events