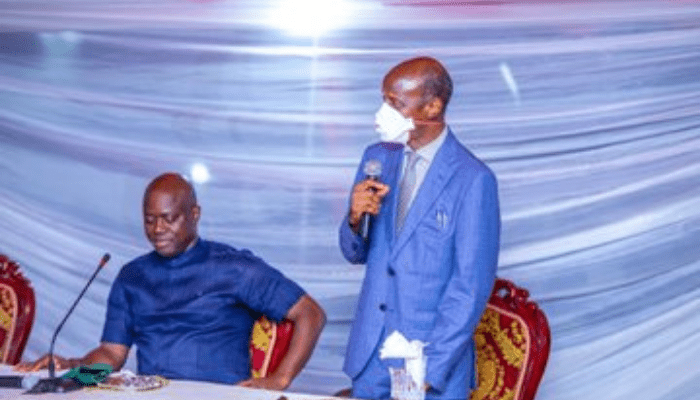 Governor Seyi Makinde has said that the state under his watch would continue to make education its primary focus, notwithstanding the growing developmental concerns in other sectors.

Makinde also said that his focus on free and qualitative education would remain unchanged, just as he remained committed to the task of moving Oyo State from poverty to prosperity.

Speaking at a dinner held in honour of the Executive Secretary of the Tertiary Education Fund (TETFUND), Suleiman Bogoro, a Professor at the Government House, Agodi, Ibadan, stated that to achieve results, his administration believes in keeping things simple.

According to him, the development of a well-thought-out roadmap for the accelerated development of Oyo State long before he was elected, has paid off, especially because of his fidelity to the propositions in the document.

Governor Makinde, who maintained that his government has identified areas where interventions could aid the development of the state, said he found a relationship with TETFUND strategic to the state’s agenda on quality education system.

He commended the TETFUND Executive Secretary for making an impact by delivering on the mandate of the Trust Fund without bias for political party affiliation or ethnicity, stating that leaders must learn to keep things simple and act in the interest of the nation.

“Our roadmap was well-developed before electioneering and it identified those areas where we think intervention will accelerate development for us. And education is one of them. We looked at the 20 percent recommended budgetary allocation by UNESCO and we looked at our annual budget for a sustainable project in education and we knew there are things we will be to achieve for our tertiary institutions if interventions from TETFUND and other critical organisations are in place.

“Knowing that there is a lot of discretionary approach to the utilization of their funds, I thought if there is anyone in this whole country that I need to develop a good relationship with, it would be the Executive Secretary of TETFUND.

“When we met during the electioneering period, Professor Bogoro explained to me that TETFUND is apolitical and this night is a demonstration of what we spoke about at that particular time. One thing I have learnt from Professor Bogoro is to make an impact. As leaders, we just have to keep it very simple.

A statement by the Chief Press Secretary to the governor, Taiwo Adisa, quoted Makinde as saying that “I want to thank you for your leadership at TETFUND, for being apolitical, and for looking at your duty as an assignment for the entire country, irrespective of ethnic background and political leaning. This is the kind of leadership we deserve in this country, and that is what can take this country out of the woods.”

In his response, the TETFUND boss commended Governor Makinde’s priority attention to the development of the education sector, noting that the governor has raised the bar in terms of increasing annual percent funding for education.

“I am told it is 23 percent and that is definitely one of the highest in this country. I am not sure if there are more than two or three states, if any, that may surpass that percentage. That is commendable.

“It shows the priority that Governor Makinde gives to education. For me, I am not surprised because we are in the South-West where it is said that in education, they lead, and the rest of the country follows.

“There is no doubt about it that in all the indices of investment in education, the South-West leads the rest of the country. For political leaders to demonstrate that in all ramifications, I want to appreciate the governor in the manner he has done it.

“Any leader that recognizes human capital as the foundation for development has established the basis for competitiveness in wherever that leader is presiding over. For that reason, I respect Governor Makinde and the entire people of Oyo State that are supporting him to do all these,” the TETFund boss said.

Bogoro, who expressed his delight at the honour done to him, added that having listened to eight of tertiary institutions being supported by TETFUND in Oyo State, he was not disappointed, as according to him, the Trust Fund has been getting the best value for its money.

He promised that the Trust Fund will continue to support institutions in the state, expressing its belief that such effort will show the confidence the agency has in Governor Makinde’s effort so that he could consolidate on what he started.

He said: “Today, what I saw in Ibadan in the three institutions that I commissioned projects; I was not disappointed. A number of TETFUND infrastructure in the University of Ibadan that were inspected are very likely to be completed within the next two months; Faculty of Arts, Faculty of Education, and the rest.

“We are getting the best of value with TETFUND money that we are putting into Oyo State and I can assure you that having eight institutions that are doing well as we have in Oyo State, we give them discretionary concession of additional funds.

“So, this is to assure you that we will continue to support your institutions as it were because we believe it is our small way of demonstrating confidence in what you are doing. We are very sure it is what you need to consolidate what you have started a little above a year you got into the office.

Earlier in their separate remarks, the Oyo State Commissioner for Education, Olasunkanmi Olaleye, and the Vice-Chancellors of the University of Ibadan and the Ladoke Akintola University of Technology, Ogbomoso, Idowu Olayinka, and Michael Ologunde, both Professors, commended Bogoro and TETFund for the support to institutions in Oyo State.

The commissioner appreciated Governor Makinde for allowing the dinner in honour of Bogoro and TETFund in recognition of the support being given to institutions in the state, stating that the state will ask for more.

“You said that in a state where you have responsible leadership that wants to transform the education sector; leadership that is working towards the growth and development of the state, the institution of TETFUND will continue to support such leadership. And one of the examples of such leadership is the government of Oyo State.”

In his remarks, Ologunde said projects funded by TETFund have made a huge difference, describing Bogoro as an outstanding leader.

Similarly, the UI VC, Olayinka said: “The fact has remained that Ibadan is the intellectual capital of Nigeria. Only God knows how many secondary schools we have in Oyo State for which the governor is responsible for paying their salaries. So, we are very grateful to the governor.

“All the infrastructure development that you see in most of our public institutions; colleges of education, universities have been due to the influence of the current Executive Secretary of TETFUND. He has made a lot of difference in that capacity.”