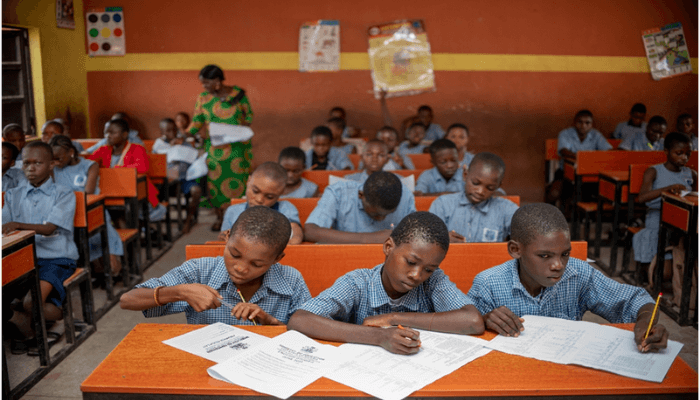 Faith Imafidon, a nine-year-old girl was having problems reading a simple text until the EdoBEST Progressive School Model was introduced in her school in February 2022.

The reason for this learning inequality was because of the poor quality of education she was receiving. Faith’s situation is similar to that of millions of children globally.

According to the World Bank, a large portion of 10-year-olds, some from developed countries, can neither read nor understand a simple text, a problem it refers to as learning poverty.

In Nigeria, the situation is particularly dire as UNESCO puts the proportion of children suffering learning poverty at “an estimated 70 percent varying from state to state.”

Like Faith, children in rural areas and those from minority groups are particularly affected, not because they are not enrolled in school but because in most cases, their teachers have not been retrained and equipped to handle the problem. In Edo state, things are different.

Helen Ojo, the head teacher of Etinosa Idunmwunhigie School in Ovia North East of Edo State applauded progressive school model as a programme designed to tackle the problems of inequality in learning among underserved, and minority communities. Ojo sees the model as using the same techniques and methods used in EdoBEST schools in cosmopolitan areas, albeit with slight modifications that address the peculiarities of remote environments.

“It took less than two weeks before the students in my school started responding to the new methods we introduced to them under the progressive school model,” she said.

For Ojo, the model is a great development that has helped improve academics among the children in her school. “The children are learning and improving. They have progressively begun to read and write better in just ten months of implementing the model,” she said.

In February 2022, a model called the Progressive School Model was introduced into state-owned primary schools as part of the Edo Basic Education Sector Transformation programme (EdoBEST) with the objective of dealing with learning poverty and reducing the number of out-of-school children in rural areas.

The progressive school model replicates the EdoBEST model albeit to suit the learning needs of children in communities which are educationally disadvantaged. In most cases, progressive schools have less than 100 pupils. They are dispersed and are often attended by nomadic children who are consistently on the move.

Osato Omoba, head-teacher of Walden Iboro School in Ovia North East notes that the introduction of cross-grade ability grouping which is one of the uniqueness of the programme to her school has improved pupils’ interest in learning after an initial period of hesitance both from the pupils and their parents.

She also noted an improvement in numeracy and literacy skills in just two terms of operating the progressive school model.

“The use of charts and sounds has been effective in improving their literacy skills. “The cross-grade ability grouping really helped them improve reading and numeracy skills and the evidence is everywhere in the school,” Omoba said.

What the model has done is to use the power of technology to bring the same lessons being taught in schools in the state capital to children in any hamlet or village in Edo state in real time.

Before the implementation of the model, a preliminary diagnostic test was carried out to better understand the literacy and numeracy skills, strengths and weaknesses of the pupils in the rural schools.

Afterwards, in January 2022 an initial set of 577 teachers and school leaders drawn from 148 progressive schools across 18 local government areas were trained at the EdoBEST Induction training to fill the gap identified among their pupils.

Their training not only introduced them to the methodology used by EdoBEST but also equipped them with the skills and tools to implement the progressive school model (which is an initiative of EdoBEST). The training specifically exposed the teachers to the technology behind EdoBEST and the way to gainfully use it to improve learning outcomes among pupils.

Monday Ailoyafen, the Head teacher of Nomadic Primary School, Ihievbree noted that with the adoption of the progressive model in his school, children from the hinterland and neighbouring nomadic community now have access to quality basic education.

“Children in the camp are now reading, using the cheers and chants taught to improve their vocabulary,” Ailoyafen noted.

He reiterated that the state government is not playing with educational standards in the state. Working with the support personnel assigned to our school.

One of the methods employed by the model in improving literacy and numeracy skills is cross-grade ability grouping. This grouping is where pupils are sorted into their ability groups based on their results from the diagnostic test. Children in each group were then taught, literacy and numeracy subjects based on their level of understanding until they were fit to be sent back to their rightful classes.

In less than a year, the progressive school model has not only democratised the spread of quality education but has also shown promise as teachers and pupils have attested to its impact on their schools. The home grown solution has shown promise as Nigeria grapples with learning poverty.