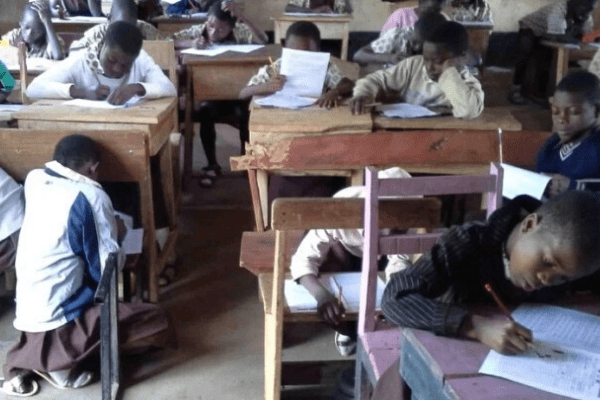 The current budgetary allocation of N48 billion to the education sector forwarded to the National Assembly for consideration by President Muhammadu Buhari would not be enough to address the decay in the sector, hence the need for members of the National Assembly to jerk it up to meet the 20% United Nations Educational Scientific and Cultural Organisation (UNESCO) standard.

According to the statement, the 6 percent of the national budget allocated to education is grossly inadequate compared to the 20 percent recommended by UNESCO hence the call to the national assembly to upwardly review the budget proposal in its possession with a specific focus on education.

“The Federal Ministry of Education declared that the funding of education at all levels in the country is below the benchmark of 20 percent of the national budget recommended by UNESCO.

“Nigeria is indeed at a crossroad considering the fact that its budget allocation to the educational sector is nothing to write home about. Therefore,  an urgent need to stimulate the process is required and the onus on this step lies with the national assembly,” says the statement.

The statement adds that the call for upwardly review of the allocation to the education sector in the 2020 budget proposal is backed by the fact that education is the driving force to innovation and industrialization of every nation, most especially that the world has gradually turned to a global village of technological hubs.

“There must be a deliberate attempt by the Senate and House of Representatives to review upward the budget allocation to Education as doing this will allow rooms for more researches and advance studies in our tertiary institutions,” the statement adds.

The group then frowned at the position of the Senate resolutions to clamp down on tertiary institutions that fall prey to the dwindling and poor allocation to the sector.

“Should we throw blames at tertiary institutions management who are left at the mercies of generating the revenue to aid in researches and other related issues as regards to tuition increment?  It is unfortunate, to say the least.

“We must say without fear or favour that members of the national assembly should channel their energy and intellectual debate prowess to ensure an upward review of tertiary education funds in tandem with UNESCO   provision.

“In putting our peg to the right hole, tertiary institutions like University of Maiduguri which despite tuition increment for purposes aforementioned, still pay below most higher institutions in Northern and Nigeria at large should be supported to actualise their goals,” says the statement.

The statement adds, “The Federal Government and the National Assembly must note that every developed and developing countries today were able to reach their peak as a result of premium given to educational institutions of their country and Nigeria must not be an exception.

“We hereby call on the Senate and the House of Representatives to as a matter of public interest reach a resolution to review upwardly the budget allocation to the Education Ministry of 2020.

“It is only on this note that Nigerians will truly appreciate the workings of the Senate, House of Representatives and the federal government of Nigeria on Education.”

In another development, The National Association of University Students (NAUS) also issued a statement urging the students of the University of Maiduguri to remain calm and law-abiding in spite of the decision of the University governing council concerning increment of tuition fees.

The statement signed by Ibrahim Muhammed Lawal, President of the Senate of the association and available to newsmen admonished students to be patient as discussions on the tuition increment is ongoing and added that hopefully, positive agreement that suits all parties will be reached.

The group also called on the federal government as a matter of urgency to increase more budget on education and also increase funding for Universities to avoid such an occurrence that is targeting and affecting academics excellence.

“If the Federal Government want to give us full support on education, they should fund our Tertiary Institutions,” the statement adds.

College of Medical Sciences is my legacy – Wike