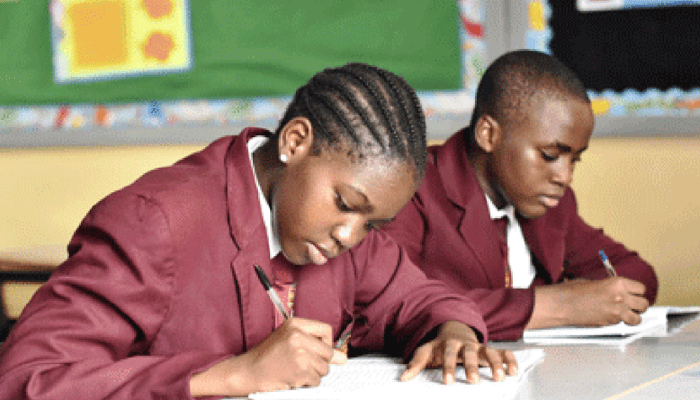 Jennifer Sunkanmi Qazzeem, principal of curriculum, Greensprings School, Lekki Campus, said providing some basic immediate needs and materials to the pupils of the school will go a long way in putting smiles on the faces of the pupils.

Sunkanmi Qazzeem said the decision to adopt the school is because Greensprings School believe that some of these lessprivileged students can be governors or senators in the future. Adding that if smiles are put on their faces today, when they become somebody in society, they will help others too.

Qazzeem further stated that the idea to adopt the school was conceived by a by a primary 5 pupil of Greensprings while the school and parents backed her up by donating for the project.

“We know that some of these pupils in public school may not have some of the things to make them happy, especially in this festive period, hence we provided these things.

She, therefore, urged other private schools to put smiles on the faces of the less privileged by adopting one public school in their community.

Many of these public schools have their needs, if private schools can just approach them, they will know their needs. We will also renovate one of the buildings of the school to put smiles on the Students faces.

Adebimpe Ajibola, principal quality assurance, Greensprings School, said that the school thrives on charity, adding that the school have a lot of charity programme and this is one of them. “We want to put smiles on the faces of as many people that we can. Our charity is not just limited to the yuletide period, but it’s part of Greensprings school core mandate. Therefore, the gesture is not about what we stand to gain but about given out to society,” Ajibola said.

She urged all stakeholders to remove selfishness from their lives and reach out to other people to make the society and the world a happy place to live. “We should know what is happening to a child and to an adult there,” she added.

On her part, Ruth Adefiola Oni, Head teacher,rcm Primary School, lauded the kind gesture, adding that it was first of its kind in her school.

Oni said: “We are very happy to see such kind of thing in our school, even the pupils as you can see is very happy because such had never happened before.”

According to her, organisations had never celebrated children like this in the school during the festive period before. “They can come and give the children materials but celebrate them as this had never happened. ”We call Greensprings School our mother school because they have promised to do a lot of things for our school,” Oni said.