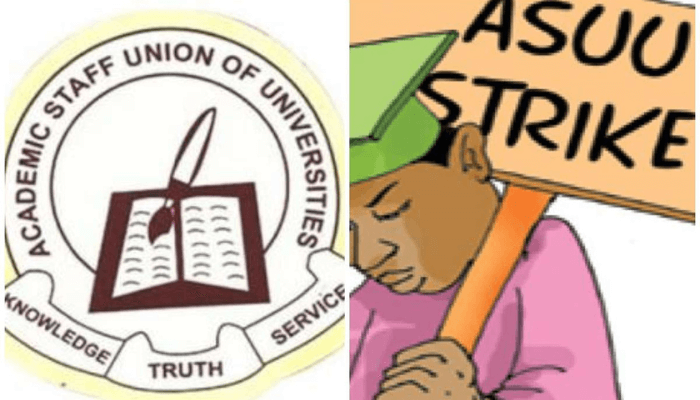 The Academic Staff Union of Universities (ASUU) has cautioned universities resuming academic activities despite the Union’s ongoing strike to desist from such action.

Chris Piwuna, the vice-president of ASUU made following a statement by Ralph Njoku, the Imo State University spokesperson directing students to resume for academic activities.

The ASUU national vice-president said it is now understandable that some of the non-members of the union in various universities are taking laws into their hands due to the federal government’s stand which caused the strike to linger.

The university don reiterated that those resumption notices by the various university authorities are not true, hence he asked students not to be fooled as the union is yet to agree when to reopen classrooms for lectures.

Piwuna further maintained that the strike action by the lecturers remains unshakeable and that those universities who announced their resumptions were still under lock and key.

Recall that Ekiti State University, Ado-Ekiti asked its students to resume for academic activities on Thursday, September 22 and had even published second semester examination time-table.

In the same vein, Imo State University, Owerri recently announce that the institution was pulling out of ASUU strike according to a statement by Njoku.

However, Piwuna questioned the authencity of the IMSU’s spokesperson to speak for ASUU when he is not even a member of the union.

“Is the PRO of the university a member of our union? Does he have the mandate to speak for our members? Did we consult with him or his VC (Vice Chancellor) before we embarked on the action? They are incurable interlopers. “They said the same thing about Gombe State University, Yobe State University, Kaduna State University, and the rest. Those institutions are still under lock and key,” he said.

The lingering impasse between ASUU and the federal government seems to be dividing the tertiary intuitions stakeholders and Nigerians as a whole.

The federal government recently dragged ASUU to the Industrial Court demanding that the striking lecturers should go back to work while negotiations continue.

And on Wednesday, September 21, the court rule in favour of the federal government, asking ASUU to return to the classroom as employees cannot be on strike while their case is in court.

However, ASUU has decided to appeal the judgement and has insisted on continuing with the strike until its demands are met.