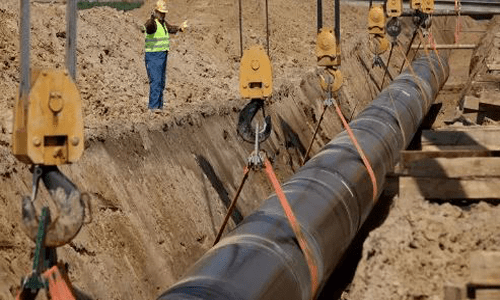 Nigeria is committing $2.8 billion it does not have to build an expensive gas pipeline where it could have been cheaper to use rail and in a region without the industrial capacity to use the gas, this is the sum of the country’s latest project.

On June 30, President Muhammadu Buhari officially launched the construction of the 40-inch x 614km Ajaokuta-Kaduna-Kano (AKK) Gas Pipeline project, a section of the Trans-Nigeria Gas Pipeline (TNGP) with a capacity to transport about 2.2 billion cubic feet of gas per day, expected to be completed in 24 months.

According to the federal government, the project will be financed through 85 percent debt and 15 percent equity with loan facility from the China Export & Credit Insurance Corporation (Sinosure) at London Interbank Offered Rate (LIBOR) interest rate plus 3.7 percent with a 12-year repayment period, while NNPC will cover the remaining 15 percent of the project’s cost.

Nigeria’s finance minister Zainab Ahmed had earlier said the government has done an extensive review of the project and is satisfied that the cash flows from it will repay the facility.

The AKK-Pipelines is hardly a new idea but could not be executed largely because of concerns about its viability. Firstly, northern Nigeria with over 80 percent of Nigeria’s poor lacks the industrial capacity to offtake the gas. Citing a multi-billion-dollar gas project in the least developed and poorest region and betting that industries would follow is like betting the house on the lottery.

According to the federal government, the economic benefits of the AKK pipeline which would originate from Ajaokuta, in Kogi State and traverse Abuja (FCT), Niger, Kaduna, and terminate at Kano, would boost domestic utilisation of natural gas for Nigeria’s social-economic development, when completed. It would also unlock 2.2 billion cubic feet of gas to the domestic market, support the addition of 3,600 megawatts of power to the national grid and revitalise textile industries which alone boasts of over 3 million jobs in parts of the country.

These touted benefits ignore the underlying challenges in the economy. Take for example the national grid, it does not require more power, considering that it cannot even move all the 8,000MW GenCos now generate but can do at most 5,000MW or it shuts down. Hoping it can take an additional 3,600MW, without massive investments to retool it, is wishful thinking.

Worse still, the 614km AKK pipeline is part of the Trans-Nigeria Gas Pipeline which will ultimately pipe Nigeria’s gas into Europe through unsecured routes prone to attacks by insurgents.

In an economy where over 90 percent of government revenue goes to servicing debt, it seems rather pragmatic to make use of existing rail infrastructure to ship gas to the north. This government is making huge investments in reviving rail lines across the country, it would have been more economical to move gas along rails rather than spending over $2.8 billion on this venture – except the objective is just a contract bazaar.

For a government with an unhealthy balance sheet, it makes more sense to use private-sector funds to build a gas pipeline in areas where industries are and guarantee access to markets for products from the north through other means. The FG can deploy such funds into other economically stimulating endeavours.

American billionaire investor, Warren Buffet’s company, Berkshire Hathaway Inc. purchased Dominion Energy Inc.’s natural gas pipeline and storage assets for an enterprise value of $9.7 billion demonstrating the capacity of the private sector to finance big-ticket investments. The Buhari government’s distrust for private capital continues to be its albatross and miring future generations neck-deep into unconscionable debts. The private sector only needs an enabling environment including a government that respects contracts.

Making economic decisions based on political considerations always leads to waste and inefficiencies. This is true of the National Independent Power Projects (NIPPs), thermal plants built far away from gas feedstocks to satisfy political interests. Today, they rot away while the country lacks power.

We commend the pivot towards gas after years of inordinate attention to oil. This year Timipre Sylva, minister of state for Petroleum Resources, said 2020 was Nigeria’s year of gas. Last year, the final investment decision on NLNG Train 7 project was reached, and the NNPC/Chevron Nigeria Limited signed agreements over the multi-billion dollars Escravos Gas-to-Liquid (EGTL) project. We only ask the government to become strategic in its thinking.