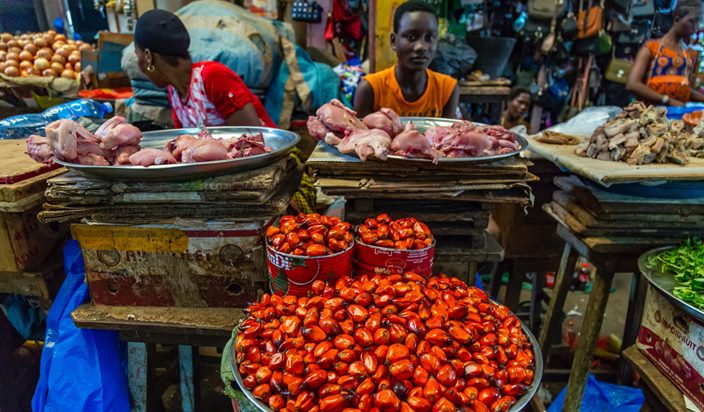 Food, one of three basic needs required to sustain human life, is going out of reach for many Nigerians as the prices of staples reach an all-time high. Hunger is now in most homes, dealing deadly blows.

The prices of staples such as yam, maize, rice, and fish have more than doubled in the last 12 months. A recent survey by BusinessDay shows that the prices of food items in Nigeria are at their highest levels since the fourth quarter (Q4) of 2017.

Food inflation reached 21.79 percent in February 2021, according to the National Bureau of Statistics (NBS), making it the highest since 2017 when it recorded a food inflation rate of 20.31 percent.

The rise has seen the prices of all classes of food jump almost on a daily basis, leaving Nigeria’s large population of middle and lower-income class citizens struggling to get food items and basic ingredients for cooking.

With prices of food accelerating at 21 percent and the economy growing at 0.10 percent, it exposes the silent crisis of food unaffordability that is at play in the country.

Additionally, Nigeria’s unemployment rate is now ranked the second-highest in the world — 23.2 million Nigerians, equivalent to the population of the Republic of Niger, do not have jobs. Another 15 million, which is as big as the population of Somalia, are underemployed. As such, the number of Nigerians who can afford basic food items is shrinking; their disposable income has been falling since 2015.

Our interaction with some traders shows that the rise in insecurity in the food basket states of the country is one of the major reasons for the hike in prices of food items in the country.

Poultry farmers, livestock feed processors and traders also said that the major reason for the rise in the prices of key ingredients for poultry feeds is the hike in prices of poultry products.

The supply of maize and soyabeans has fallen steeply in recent months, they said, and a key reason has been insecurity that has kept farmers off their farms last year. Other factors are Covid-19 disruption, weather changes, and challenges with importation.

At Ogbete Market in Enugu State, buyers said as of October 2020 a crate of eggs sold for N950 but later increased to N1, 200 per crate in November.

Food insecurity in Nigeria is continuously being aggravated by myriad factors, including communal conflicts and, most recently, the COVID-19 pandemic. The presence of militant groups like Boko Haram, in addition to violent clashes between herders and farmers, has further compounded the problem

About nine out of 10 Nigerians cannot afford a healthy diet. Nigeria has the second-highest burden of stunted children across the globe and millions of children suffer from acute malnutrition. The COVID-19 pandemic has worsened the hunger situation, particularly impacting food supply and prices.

Since then, several agricultural schemes such as Operation Feed the Nation (OFN) and agricultural development projects have been launched with limited sustainable impact.

Other factors such as poor infrastructure, limited rural development, credit, land, and labour put women and rural farmers at a disadvantage in agricultural productivity.

We believe that, should the unholy union of food insecurity, food inflation, and insignificant economic growth continue to sustain the upward trend in food prices, the future of the middle and lower-income class group in the next three to four years appears bleak and could have negative economic consequences in the near-future.

Need to replicate successes in telecom, others in key sectors