ABiT Network has officially launched two of its apps on Google Playstore, ABiT Farms and ABiTrader, a move to make investing and trading more convenient, the popular blockchain company in the African market said Friday.

ABiT Farms is a generational agricultural investment platform that brings investors together to co-invest in long-term agriculture and earn returns in investment after every harvest. ABiTrader,  is a unique system focused type of service that allows access to credible cryptocurrency trading signals and suggestions from experts on the best possible ways to profit from trading. See ABiTrader on Playstore , ABiTrader

“It is great to know that we have launched two of our apps on Google Play store and ABiT farms already has more than 1,000 downloads,” said Gaius Chibueze the CEO of ABiT Network. “The platform allows you farm and you get returns for up to 40 years without even going to the farm. The farms are listed on www.abitfarm.com.” Link to ABiT farm on playstore  ABiT Farm App 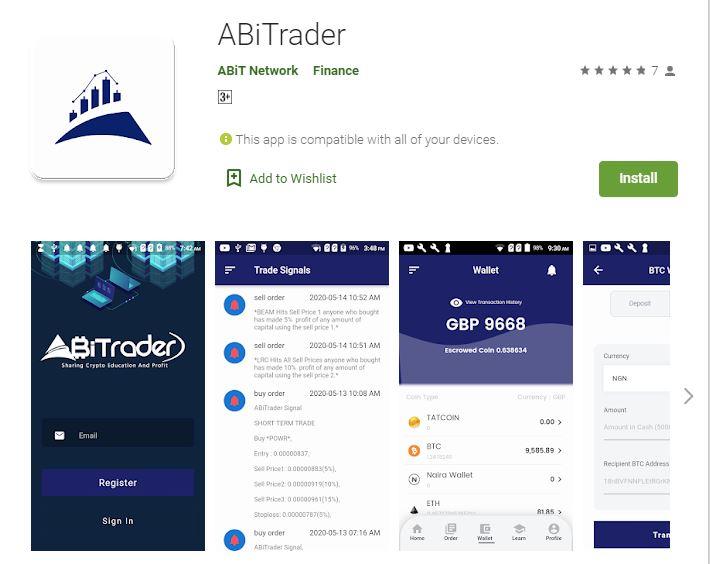 Chibueze said the apps are one of a kind in the tech and crypto industry to create money-making opportunity in the real estate market as well and would help newbies and professionals in the cryptocurrency industry to get signals to profit from the crypto market.

He also went further to explain that people can now use their ABiT wallet on ABiT Trader and all their platforms to pay for the company’s products.

After the apps are downloaded users can send naira to their wallet and buy cryptocurrency or pay directly for any product on the platform following a recent payment integration.

All of these would allow users easily send naira to each of the platforms existing in the ABiT Chain and allow users buy cryptocurrency Tatcoin not just on ABiTrader, a platform that allows people learn how to trade Crypto Currencies like Bitcoin and Ethereum, but also on subsidiaries like ABiT Farm, ABiT Go.

Speaking to BusinessDay, the Chief Technology Officer Raymond Idu said that with the app users now have direct access to ABiT Farms and ABiTrader and with one click when downloaded, can just log in and invest in ABiT Farms if they have an account with ABiT Network product.

“By the Grace of God the apps ABiT Farm and ABiTrader are officially launched and they use the underlying technology we initially launched which is the central system that controls every information peculiar to the user, so you can now log-in to any of our product if you are already an existing user,” he said.

Idu also added that there is also a particular account number created for all the users and they can send their Bitcoin address to anyone as well as use Bitcoin for making payments on the app.

The ABiT apps come at a time where there is increasing interest in cryptocurrency as an alternative investment in Africa. The launch on Friday serves to encourage the full exploration of the continent’s potentials in digital currencies, blockchains, and related applications as right now over 1.5 million out of over 1.2 billion people in Africa are starting to use crypto products.

4 Stupid Things People Say About Money That Keeps Them Poor

How One78 Foundation impacts humanity