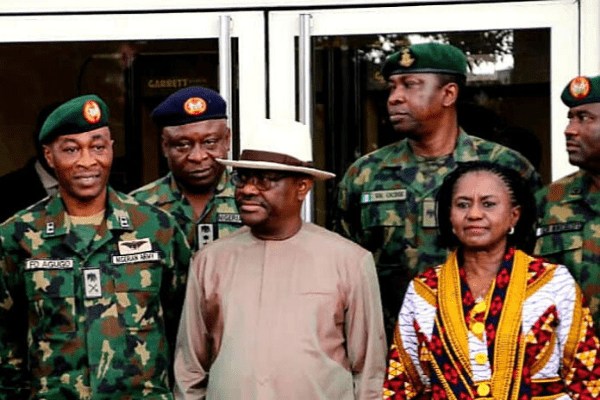 One hundred and twenty-three (123) persons were taken to court for breaching the curfew order in Diobu and Choba areas of Port Harcourt in Rivers State, but the coalition of Civil Society Organisations (CSOs) in Rivers State (RivCSOs) has demanded an apology from the state governor.

The CSOs said those arrested obeyed the governor who had said in the broadcast that the curfew was from ‘dusk to dawn’ which they said was understood to be 7pm to 6am.

RivCSO said the governor had declared a ‘dusk to dawn’ curfew in the state only for the Commissioner for Information to clarify later that the government intended 24 hours curfew in the affected part of the state. “RIVSCO therefore, calls on the Rivers State Government to direct its Attorney-General to release and discharge without conditions all those who were arrested and sent to the magistrate court for trial as result of this glaring mistake of government. Anything outside this, we will conclude that government wants to punish these citizens for obeying the governor’s directives.”

It also called on the Inspector-General of Police to instruct the police in Rivers State to be more professional in dealing with Rivers people. It said that without being in a war situation, Rivers people are hounded, beaten, arrested and asked to raise up their hands while walking past a police blockade.

The group pointed out that at a time when the IGP has ordered all police formations in the country except for grievous offences to decongest prisons/police cells to encourage ‘social distancing’, citizens numbering over hundred (actually 123, according to the charge sheet) were packed like sardines in police vans/buses in the name of merely disobeying government order.

According to it, all the world over, security agents only flog or chase citizens indoors not to arrest them. The police were seen taking these actions without any personal protection equipment thereby putting the nation, the citizens they’re packing together, and the police officers themselves at risk. It’s our view that the police should conduct short program on COVID-19 for its officers.”

The CSO coalition said it supported the Rivers State government on its decision to place curfew on some parts of the state to tame the spread of COVID-19, especially as its decisions conform with the Quarantine Act.

It said however that the government had failed to disclose its level of preparedness on some basic areas.

It noted for instance, that the government was yet to inform the citizens about its palliative measures to cushion the effect of this curfew as more than 70% of its citizens are daily income earners.

“The Rivers State government is yet to provide alternative markets for food and other essential goods, neither has the government regulated the prices of goods in shops nor opened a boundary corridor for food to come into the state.

It noted that the government was yet to tell Rivers people its level of preparedness to fight the COVID-19 pandemic in terms of the number of verification/testing machines, number of isolation centers, training of health workers, and funding of the process.

“Finally, we call on Rivers people to obey all government directives pending when it will review its earlier decision. We shall overcome this pandemic,” the source said.