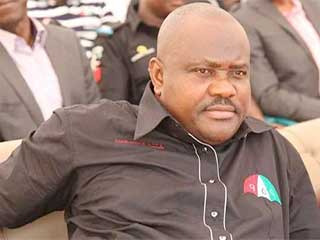 Gov Nyesom Wike has just suspended local council chairman of Obio/Akpor Local Government Area with  his deputy for allowing markets to operate in their area. He has also imposed a dusk-to-dawn curfew in parts of Port Harcourt while also threatening to confiscate bars that he said have replaced night clubs that were banned.

The governor imposed the curfew following an alleged violation of the market closure order on  Obiri-Ikwerre Junction (Ozuoba, Rumualogu) to Choba, and from Education Bus Stop to Agip Junction.

In a broadcast on Monday, March 30, 2020, the governor said all beer parlours and public drinking joints were closed because they have suddenly become an extension of night clubs that were earlier shut down.

“Traditional Rulers, Youth Leaders and Community Development Committees are to ensure that beer parlours and public drinking joints in their areas remain closed. Any Traditional Ruler who allows markets to be open in his domain will be deposed.”

It said that the government was investigating the illegal operation of markets at night at Woji and Elelenwo communities. Further violation by residents of these two communities will attract declaration of curfew.”

Governor Wike said a further violation of the directive for markets to remain closed would attract a state-wide curfew.

The Rivers State Governor announced waivers to different categories of persons in view of the directive of the State Government. They include: medical and pharmaceutical personnel, food and beverages, essential oil and gas staff, petroleum products and media workers and newspaper distributors. All these categories of staff must identify themselves with valid identity cards.

The governor declared: “My Dear Good People of Rivers State, based on suggestions by well-meaning Rivers people, government is looking into the setting up of food markets across the State.”

The Rivers State Governor announced the immediate suspension of the Council Chairman of Obio/Akpor Local Government Area and his deputy for failing to implement the state government’s directive on the closure of markets.

“Let me reiterate that this government will continue to do what is right no matter who is involved.  As you are all aware, no conventional war has grounded global life and economy like coronavirus has done.

“Everybody is affected.  Therefore, all hands must be on deck to defeat coronavirus. I want to sincerely express my heartfelt gratitude to our health professionals on the frontline of this fight.  Let me also thank all the security agencies, individuals and organisations who are collaborating with us to make Rivers State safe.”

Coronavirus: After Israel, US, UK plan to evacuate their citizens from Nigeria

Coronavirus: US announces evacuation of citizens from Nigeria