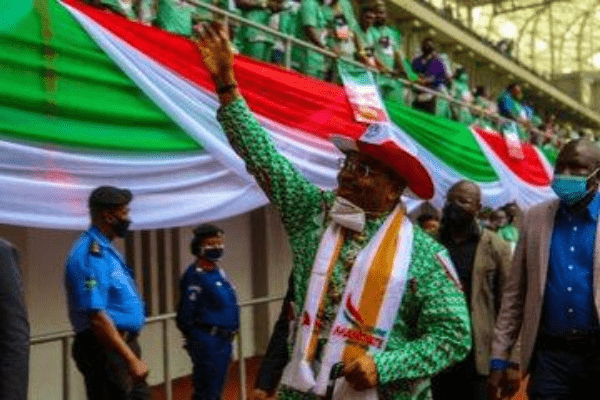 Share
The Forum of Civil Societies Organisation (CSO) in Akwa Ibom State has demanded an explanation from Governor Udom Emmanuel how N3 billion was reportedly spent on COVID-19 pandemic.
Governor Udom Emmanuel had stated during a recent update given on the COVID-19 situation in the state that the government has so far spent N3 billion to fight the disease.
However the Chairman of the Forum of Civil Society  Organisations (CSO) in the state, Harry Udoh has questioned how the amount spent was arrived when only 1,103 persons have been tested for COVID-19 in the state.
He explained that a breakdown of the expenditure was necessary for third party accountability and transparency on how the money was expanded.
He added that since the government had testified to have received monetary and material donations from individuals and corporate organisations, it was expedient for the people to know if the N3 billion was part of the donations received.
According to him, since the 2020 budget did not capture the COVID-19 expenditure and also had to be slashed because of the economic downturn due to the pandemic, a clear understanding of where the N3 billion was sourced from is important.
“You know from the onset we have been asking for transparency in the COVID-19 Implementation within the State. First of all, the government has come out to mention that sum, which is commendable because that has been one of our advocacies, but the point is that we need to know exactly where the N3 billion is channeled to.
“Giving us figures like that doesn’t help the case while we commend him for telling us how much that has been spent, we need to have a breakdown of the expenditure so as to be able to provide third party accountability.
“For CSOs in the State, we need to exactly know the things that gulped the N3 billion. Was it on the building of the treatment centre at Uruan? Did they buy drugs with that money? Was it on a laboratory test? We are aware that testing costs between N30,000 to N40,000 as we learnt in other States. If you are spending public funds, you should be able to make the account public.
“It is after the breakdown that we will be able to say, you couldn’t have spent this on that etc. Until that is done we won’t be able to say much. So that we know what the recurrent expenditure is; don’t forget that the same day he made that statement, he announced the increment of health workers’ salaries and allowances. So we want to know if it is part of the N3 billion.
“You know this is extraneous expenditure because it wasn’t something that was envisaged when the 2020 budget was put together, no one envisaged COVID-19.
“To say you spent N3 billion, it makes it difficult to speak to it. Does that N3 billion include the donations that came which were published in Punch newspapers the other day? Without knowing exactly the details, it makes commentary on budget and expenditure quite difficult,” he explained.
Share