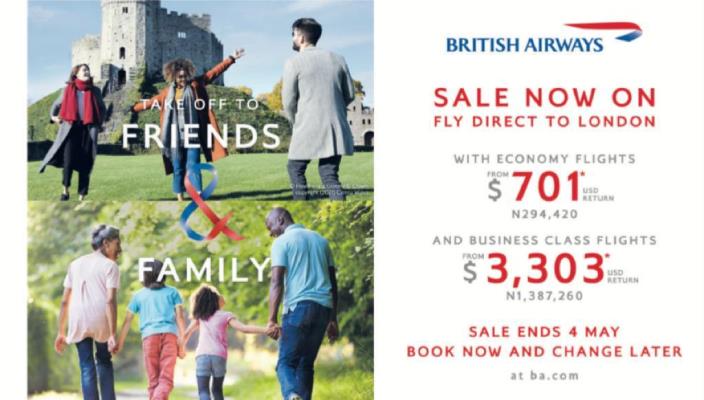 British Airways hopes to be the first of the large carriers to pull Nigerian summer travelers with promotional fares as success in vaccination around the world continue to hold back the surge of the pandemic. In Lagos and other major cities in Nigeria, data show that the spread of the virus has significantly slowed down.

This morning the British carrier launched a mouth-watering ticket sale offering its business class seats from Lagos to London at N1,387,420 and the economy ticket for just under N300,000 return.

The promotional sale captioned “take off to friends and family” will end on May 4 but it comes with flexibility that allows travelers to change their dates even after buying their tickets.

The promotion comes as the United Kingdom starts a gradual opening of the country following a world beating success in the roll out of the covid vaccination.

British transport secretary Grant Shapps says Brits can now begin to think about booking overseas summer holidays as the UK looks set to introduce the so-called traffic light system to categorise countries based on their coronavirus risk levels which will help the government to restart overseas holidays.

And in the US, American Airlines said Wednesday it expects to fly more than 90% of its domestic seat capacity in the summer of 2021, compared with the same period in 2019, due to a strong rebound in bookings.

The U.S. airline also expects to utilize 80% of its international seat capacity this summer, compared with 2019 levels and the airline will operate more than 150 new routes this summer, as people increasingly travel for leisure.

Air travel has been impacted by travel restrictions around the world due to the COVID-19 pandemic, however, rising vaccination rates are widely expected to aid bookings later this year.

“Today, (customers) are telling us they’re eager to get back to travel,” said Brian Znotins, American’s vice president of network planning, in a statement.

The news came after Boeing said on Tuesday it delivered 29 aircraft in March, up from 20 a year earlier, with the U.S. planemaker’s net orders staying positive for the second straight month as airlines get ready for a recovery from the COVID-19 pandemic.
The company’s orders appear to be turning a corner after the coronavirus crisis caused airline customers to cancel hundreds of jets on orders last year, resulting in one of the worst performances for Boeing ever.

Boeing’s net orders turned positive for the first time in 14 months in February as COVID-19 vaccine rollouts boosted the confidence of its customers.

A further sign of the brightening prospects for the global economy came from the Paris-based international energy agency which has revised higher its oil demand forecast for this year, saying “fundamentals look decidedly strong” when compared with April last year.