Zenith Bank grows half-year profit by most in 9years

Zenith Bank, Nigeria’s second-biggest lender by asset, posted its highest profit in nine years in the first half of 2021 as net income on fees and commission surged.

The tier-one lender which is the first among its big five peers to release half-year results grew profit by 2.29 percent to N106.12 billion in the six months to June 2021 from N103.83 billion reported in the corresponding period of 2020.

Zenith Bank reported a profit in the review period despite a N13.02 billion slump in interest and similar income to N203.93. billion in June 2021 from N216.95 billion the previous year, as compiled from the lender’s audited financials.

The lender’s profit was largely supported by the 42.26 percent jump in net income on fees and commission to N47.66 billion in the first six months of June from N33.50 billion recorded in the preceding period of the year before. 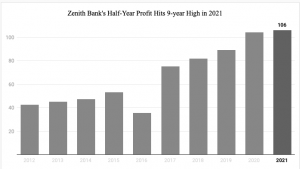 The majority of the income was obtained from account maintenance and income from electronic products. Zenith Bank attracted N14.48 billion from account maintenance fees, N5.05 billion more than the N9.43 billion it reported in June 2020. Its fees on electronic products was up by N1.89 billion to N8.94 billion in June 2021 from N7.05 billion in the same period of 2020.

Breakdown of the Bank’s half-year financials showed it reported weaker gross earnings to N345.6 billion in the six months to June from N346.1 billion recorded at half-year 2020, the peak of the pandemic when Nigerian lenders tightened credit criteria to enable them to prevent an increase in non-performing loans. Meanwhile, a bank’s gross earnings is used to measure how efficient it is as it determines how well it uses its resources to produce a profit.

Zenith Bank, however, reported a pre-tax profit that was up 2.6 percent at N117.1 billion. Its earnings per share rose 2.4 percent to N3.38 in the six months to June from N3.30 reported in the corresponding period of 2020.

Meanwhile, the tier 1 lender has said it will pay shareholders an interim dividend of N0.30 per share totalling N9.4 billion for the period under review.

The company is expected to pay an interim dividend of 30 kobo per share on all the outstanding 31,396,493,786 ordinary shares of the company.

“An interim dividend of 30 kobo for every share of N50k subject to appropriate withholding tax will be paid to shareholders whose names appear in the register of members as at the close of business on the 10th day of September 2021,” the bank’s Company Secretary, Michael Otu, said in a statement.

Zenith Bank engages in the provision of banking and other financial services to corporate and individual customers.

The segments cover banking operations in other parts of Africa (Ghana, Sierra Leone and The Gambia) and Europe (the United Kingdom). The Bank’s operations are primarily organized based on its geographic areas, which are Nigeria, the Rest of Africa and Europe. Its subsidiaries include Zenith Bank (Ghana) Limited and Zenith Bank (Sierra Leone) Limited.

IOSCO consults on addressing risks from digitalisation of retail marketing,…