May & Baker posts profits of N1.4bn, highest in seven years 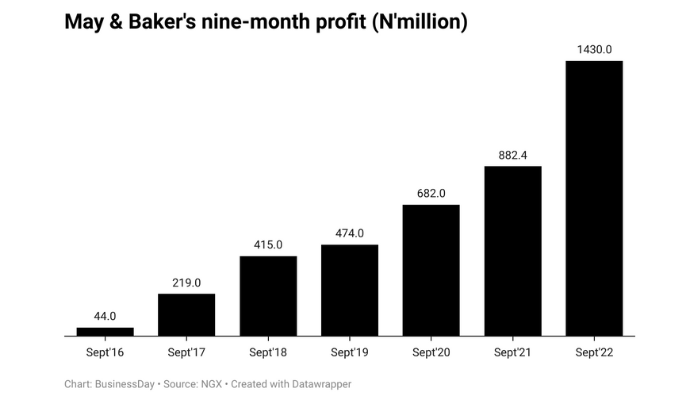 May & Baker, a manufacturer, and distributor of pharmaceutical products in its recently released nine-month financial results for the period ended September 2022 has reported a 62 percent increase in profit to N1.43 billion from N882.4 million in the corresponding period of 2021, the highest reported in seven (7) years.

According to BusinessDay’s findings, profit reported by the pharmaceutical company was driven mainly by the pharmaceuticals revenue generating segment which contributed N2.82 billion to the profit before tax reported in the period, while other operating income, interest income, and beverages revenue segments contributed N1.46 billion, N87.4 million, N5.9 million respectively.

The firm’s distribution, sales, and marketing expenses reached N1.52 billion, up 17 percent from N1.3 billion in the comparable period.

May & Baker’s borrowings jumped to N2.5 billion, a 25 percent increase from N2 billion in the comparable period.

Net cash from operating activities recorded a positive N329 million from a negative of N1.9 billion.

Net cash used in investing activities recorded a positive of N402.5 million from a negative of N346.34 million in the period under review.

Cash and cash equivalents increased to N3.5 billion, up 16 percent from N3 billion in the period reviewed.

Basic earnings per share from continuing operations increased to N82.90 in the nine months of this year from N51.15 in the nine-month of 2021.

Sandys retires from Guinness Nigeria board