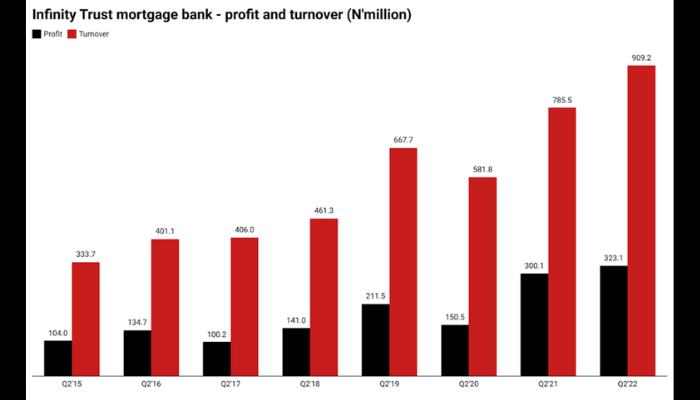 Infinity Trust Mortgage Bank Plc, has released its unaudited financial statement for the period ended June 2022, showing how rising interest and similar income pushed the firm’s profit to the highest in eight years.

Net operating income grew 6 percent to N729 million in June 2022, as against N687.8 million recorded in the previous year.

Cash flow from financing activities recorded a N17.9 million loss, coming from a gain of N210 million while cash and cash equivalent stood at N1.35 billion, a 0.7 percent increase from N1.34 billion in June 2021.

Cost moderation was achieved in all the other expense lines of the bank over the review period, leading to a reduction in cost to income ratio. Total operating expenses slowed down from an increase of 20 percent to N368 million at half year in 2021 to 5.5 percent to N388 million at the end of June 2022.

With the much stronger growth in gross earnings, operating cost margin declined from 47 percent in the same period last year to less than 43 percent at half year in June 2022.

The cost savings were however insufficient to counter the impact of the increased cost of funds on earnings, leading to a decline in net profit margin from 38.2 percent in the same period in last year to 35.5 percent at the end of June this year.