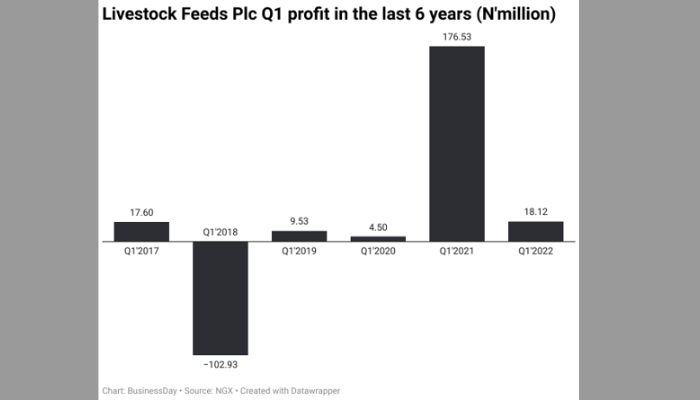 Livestock Feeds Plc, a subsidiary of United Africa Company of Nigeria (UACN), recorded a decline in profit by 89.8 percent to N18.1 million in the first quarter (Q1) of 2022, from N176.5 million in the same period last year.

Data sourced from the Nigerian Exchange Group (NGX) shows that the animal feed manufacturer recorded an increase in revenue by 8.3 percent to N3.64 billion from N3.36 billion in the comparable period of 2021.

The company recorded a profit before tax of N27 million, an 85.8 percent steep decline from the N190 million recorded in the comparable period of 2021.

However, the agribusiness selling and distribution expenses declined by 28.6 percent to N40 million from N56 million in the comparable periods under review.

The cash and cash equivalent show the value of a company’s assets that are cash or can be converted into cash immediately.

Analysis by Businessday that gauges the profitability of the company relative to its revenue shows a profit margin of 49 percent.

Livestock feeds earnings per share declined by 89.6 percent to 0.60 kobo in Q1 2022, from N5.88 kobo in the corresponding quarter last year.

Livestock Feeds Plc is a pioneer in the production of animal feed in Nigeria.They operate two owned plants which are strategically located in Ikeja and Aba with a joint production capacity of well over 35mt/hr and other operations in Onitsha and Jos.