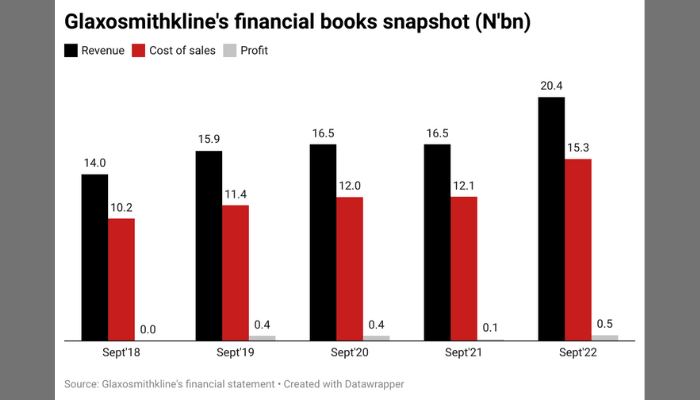 Glaxosmithkline has recorded a profit after tax of N483.5 million in the first nine-month of 2022, a 294 percent increase from N122.7 million in the corresponding period of last year.

The pharmaceuticals segment contributed the most revenue of N14.16 billion while consumer Healthcare contributed N6.26 billion in the first nine-month of 2022.

Revenue from the sale of goods – local increased by 25 percent to N20.4 billion from N16.3 billion in the period reviewed.

The firm recorded no revenue from the sale of goods – export while N148.4 million was recorded in the nine months of last year.

Administrative expenses increased by 6 percent to N1.6 billion in September 2022 from N1.5 billion in the same period of last year.

Selling and distribution costs climbed 3 percent to N2.84 billion from N2.75 billion in the period reviewed.

Profit from the sale of property, plant, and equipment grew to N23.7 million, a 356 percent increase from N5.2 million in September 2021.

The firm received an advance from customers worth N45.2 million, a 53.6 percent decrease from N97.4 million in September 2021.

Basic earnings per share attributable to each shareholder increased to N40 from N11 in the period reviewed.

GSK plc, formerly GlaxoSmithKline plc, is a British multinational pharmaceutical and biotechnology company with global headquarters in London, England. Established in 2000 by a merger of Glaxo Wellcome and SmithKline Beecham.