Data gleaned from the Nigerian Exchange Limited (NGX) has shown how four firms operating in Nigeria’s downstream sector paid a total sum of N2.56 billion in the first three months of 2022.

In an industry used to the highs and lows of economic and commodity price cycles, 2022 poses one of the greatest challenges to oil and gas companies.

Nigerians, especially those living in Abuja and Lagos and adjoining states, suddenly woke up in February and found themselves in the middle of petrol scarcity and the usual sufferings at fuel stations that come with it. 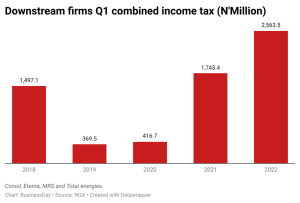 The process of recalling the tainted batch led to fuel scarcity and the consequent hike in prices and distrust from the public.

Income tax is deducted from the profit before tax to give the actual profit for the period, hence a higher tax will reduce the downstream sector’s profit for the year. 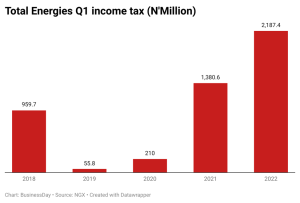 In five years, the downstream sector recorded the highest in March 2022.

Income tax jumped to N210 million in March 2020 compared to N55.8 million in the preceding year.

MRS recorded the least income tax compared to its peers which stood at N56 million, a 27 percent increase from N44 million in the year-ago period. The income tax for 2019 and 2020 was unavailable in its financials.