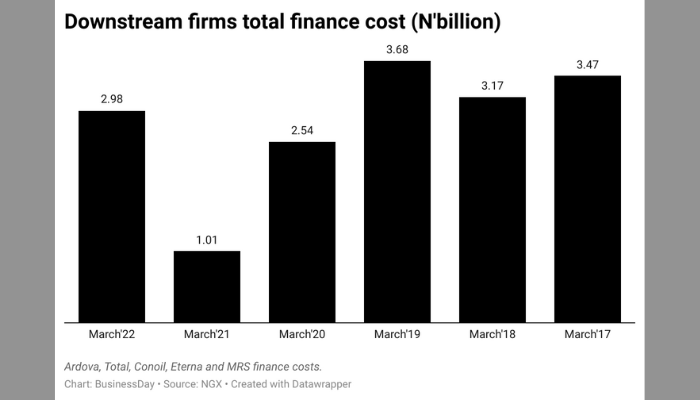 Nigeria’s downstream sector has witnessed uncertainty as marketers increased the price of petrol to between N170/litre and N190/litre.

This raised tension across major cities in Africa’s biggest oil-producing country on account of the increase in transportation costs.

Association of Transporters and Distributors of Petroleum Products has asked the Federal government to settle over N500 billion bridging claim of its members or face their wrath.

Ardova got top marks as the downstream firm with the highest finance cost in the first quarter of this year.

Administrative expenses stood at N2.52 billion in March 2022, a 68 percent jump from N1.5 billion in the corresponding period of last year.

The company acquired Enyo Retail and Supply Limited in 2021 making it one of the oil and gas marketing companies with the largest retail network in Nigeria.

Ardova Plc is an indigenous energy group, headquartered in Lagos, Nigeria, with extended operations in Ghana. It operates majorly in the downstream sector of Nigeria’s Oil and Gas industry but has diversified its businesses into other sectors of the energy value chain 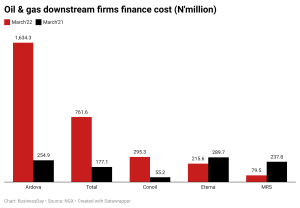 Total Energies got second top marks with its finance cost at N761.6 million in March 2022, a huge 330 percent from N177.1 million in the preceding year.

Total assets grew 30 percent to N271 billion as against N208.7 billion in the preceding year.

Selling & distribution costs surged to N1.161 billion, compared to N864.4 million in the period under review.

The firm’s administrative expenses saw a rise to N7.56 billion, coming from N7 billion in the preceding year.

Total Nigeria Plc is a marketing and services subsidiary of TotalEnergies; a multinational energy company operating in more than 130 countries and committed to providing sustainable products and services for its customers.

Conoil Plc, a marketer of refined petroleum products in Nigeria, recorded a 31 percent increase in its profit after tax to N557.2 million in the first quarter of 2022 from N423.9 million in the same period of 2021.

Administrative expenses grew to N1.31 billion against N1.29 billion in the comparable periods.

Total assets rose by 58 percent to N49.11 billion as against N30.98 billion in the comparable period.

Selling and distribution expenses declined to N33 million compared to N37 million in the comparable periods.

General and administrative expenses rose to N1.1 billion from N795 million in the previous year.

Eterna plc manufacture, market and distribute lubricants and chemicals, trade in crude, and operate a network of filling stations.

MRS recorded a loss of N41.45 million compared to an N4.8 million profit in the first quarter of the previous year.

The cost of sales jumped to N16.76 billion compared to N16.43 billion in the period under review. Selling and distribution expenses increased to N336 million from N329 million in the previous year.

Administrative expenses also increased to N980.8 million compared to N969.9 million in the period under review.

MRS is one of the largest and leading marketers of refined products, including quality gasoline, marine, and aviation fuels in the downstream industry in Nigeria.