Rating agency, Agusto & Co has predicted that the assets of lenders in the country would be under threat on the back of worsening cases of Coronavirus in the country.

In a report, titled ‘COVID-19 pandemic impact on Nigerian Banks’ published by the rating agency, banks that are significantly exposed to some sectors which include the oil and gas sector, manufacturing, real estate, public sector, construction and general commerce, would have their assets quality weakened in view of the impact on State Governments’ finances, purchasing power of households and the performance of businesses.

The largest exposure of the banking industry’s credits is to the oil and gas sector, which accounted for over 30percent of the loan portfolio as at 31 December 2019.

Although the degree of impact will vary across different sectors, the key sectors that will bear the brunt are oil and gas (upstream), real estate, construction, transportation (aviation) and manufacturing (non-essentials).

In terms of currency distribution, approximately 47percent of the Industry’s gross loans are foreign currency denominated (FCY), predominantly in the United States Dollars (USD) as at full year 2019.

According to the report, the banking Industry’s exposure to vulnerable sectors threatens asset quality in the short term due to the decline in global crude oil prices elicited by a slump in demand (due to economic lockdowns in several countries) which will result in lesser revenues for oil and gas firms and the government as crude oil proceeds account for about 60percent of the sovereign’s revenues and 95% of the country’s export proceeds.

Being the largest spender, a decline in the government’s revenues has a ripple effect on key sectors such as construction, manufacturing, real estate and general commerce. In addition, the Central Bank’s ability to defend the naira is threatened by lower FCY revenues, which results in weaker macroeconomic indicators (such as high inflation and currency depreciation) and directly affects businesses and households. The recent Organisation of Petroleum Exporting Countries (OPEC) quota adjustment – leading to supply cut – are aimed at easing pressures from the oil supply side to some extent. 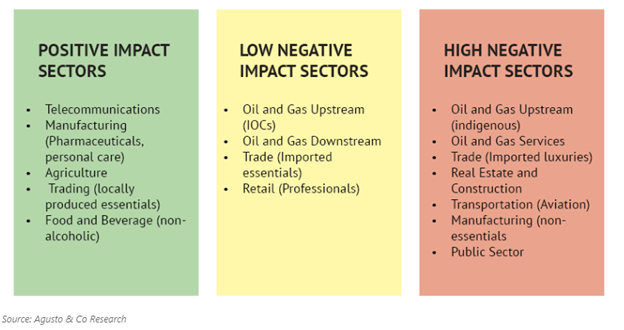 “We estimate an average crude oil price of $30-$35 per barrel, bearing in mind that in the first quarter of the year, crude oil averaged $55.9 per barrel,” the report noted.

Another reason is the anticipated further devaluation of the naira which will bloat the Industry’s foreign currency loan book, dominated by the oil and gas, manufacturing, general commerce and other import dependent sectors.

“This could weaken capitalisation ratios via higher risk weighted assets and increase the level of delinquent FCY loans,” the report said.

Thirdly, the disruption in the global supply chains is expected to increase demand for domestic alternatives for inputs used in the manufacturing sector. While this is good for the domestic market, the higher cost implications will adversely impact the margins of producers, as increased costs are not easily transferable to final consumers, especially in a period of weakened consumer purchasing power.

And lastly, the revenues of most businesses in the ‘non-essential’ manufacturing sectors will be hit by the general lockdown in the largest commercial centres in Nigeria.

It subsequently revised non-performing loan ratio expectations to 13percent in the short term due to the coronavirus pandemic as against the initial 9.4percent. This is based on the assumption that the average crude oil price will be $30-$35 per barrel.