Can Vitafoam sustain this new found path of profitability?

by Olufikayo Owoeye and Segun Adams On Jan 6, 2020
Share

Listed manufacturer of foam products, Vitafoam has announced its profit more-than-quadrupled and crossed a record billion naira-mark in 2019 after company sales jumped 14 percent.

Vitafoam posted an annual profit of N2.46bn for the business year ended 30 September 2019. This is 309 percent more than it made in the previous year and the fastest bottom-line growth in at least five years.

The stock beat the general market performance with a year’s return of almost 20 percent while the NSE’s main equity gauge lost nearly 15 percent in 2019.

The manufacturer grew revenue by 14 percent to N22.28bn with sales from foams and other products up by 10 percent year-on-year while Freight income which was dormant in 2018 contributed N779.328m in 2019.

The addition from the latter segment was a significant boost to Vitafoam earnings.

Cost of sales declined by 1.15 percent which resulted in an increase in gross profit by almost 50 percent to N8.76bn.

The results meant that for every N100 sales Vitafoam was able to retain N39.33 after settling direct costs. This is an improvement compared to a gross margin of 29.98 percent or N29.98 per hundred naira sales.

Profit from operating activities was 112.44 percent higher in 2019 compared to N2bn recorded in the preceding year.

Vitafoam announced that its board recommended a dividend of N525m which would translate to 42kobo per share for the 2019 business year. 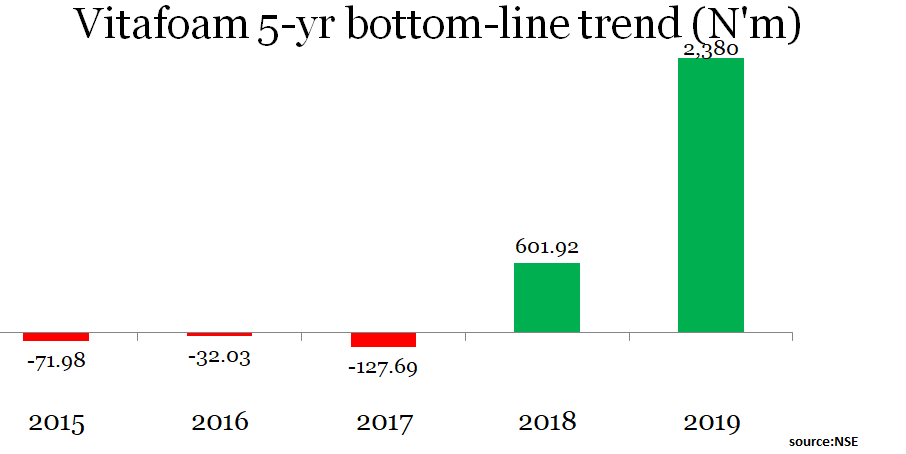 The dividend is subject to shareholders’ approval and withholding tax.

At its last Annual General Meeting, the company announced that it has secured N2billion loan facility from the Bank of Industry. The loan facility has a tenor of five years with a 12percent interest with a one-year moratorium on principal. According to the management, this is to augment its working capital, provide significant savings on its cost of funds, increase margins and profitability from bulk procurement of major chemical raw materials directly from manufacturers at lower cost compared to procurement from the third party suppliers.

In a bid to also boost and diversify its revenue base, the foam maker introduced established Vitaparts Nigeria Limited, new subsidiary to manufacture oil filters.  While a new production line was added to its soft furnishing subsidiary, Vitablom Nigeria Limited.

The group consists of Vitafoam Plc (the company), as well as subsidiaries controlled by the company, including Vono Products Plc which it merged with in 2015.  While Vitafoam (the company) has consistently made a profit, its subsidiaries have struggled. Last year’s results show most of them made loss.

Vitafoam was established in 1962 by two giants: British Vita and Unilever. The Nigerian Promoter Decree No. 3 of 1977, mandated companies to sell sixty percent of their share to the Nigerian public, thus in compliance with the decree, Vitafoam became a public company in 1978 and listed on the floor of the Nigerian Stock Exchange in 1978.

On the board of the company is Taiwo Adeniyi who is the CEO and managing director. Adeniyi holds a BSc Degree in Chemistry and MSc Degree in Pharmaceutical Chemistry from the University of Lagos and MSc Degree Engineering and Logistics from the University of Warwick, United Kingdom. He joined the Vitafoam Group in 2007 and was appointed to the Board in July 2012. Prior to his appointment as Acting Group Managing Director/CEO, Mr. Adeniyi was the Group Technical & Development Director.

Bamidele Makanjuola is the chairman of Vitafoam Plc. Makanjuola is a first-class Chemical Engineering graduate of University of Ife (now Obafemi Awolowo University), Ile-Ife. He holds a Doctor of Philosophy degree in Chemical Engineering and Economics from the Loughborough University of Technology, UK. He is a member of both the Polymer Institute of Nigeria and the Nigerian Society of Engineers. Prior to his appointment as the Chairman of Vitafoam Group, He has served as the Executive Director in charge of Corporate Planning and Development in December 2001 and appointed as the Managing Director on 1st April 2006.

Other members of the board include Olufemi Deru, John Erinne, Adebayo Adeola, Abbagana Abatcha.

The manufacturer also advised the Exchange and investing public of the appointment of Achike Charles Umunna as a non-executive director with effect from December 19, 2019. 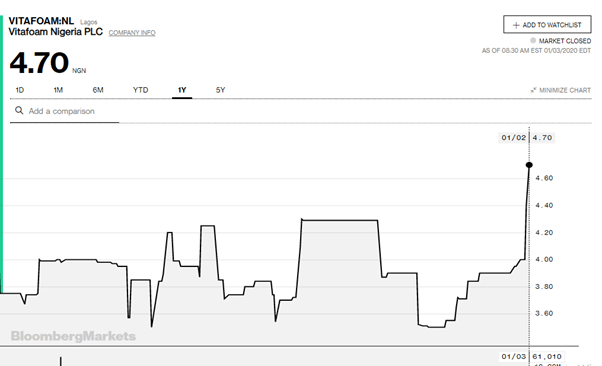 Vitafoam in a duopolistic market

There are two major brands competing for market share in the Foam business in Nigeria. The two major players namely; Vitafoam and Mouka foam has continued to dominate the market forcing other small players to the fringes.

To keep itself in the face of its loyal consumers, Vitafoam has changed its business model by not only adding more product lines but also improve on the quality and visibility of its headline products through the opening of more comfort centers across the country while also deepening its logistics and distribution business. Vitafoam has also doubled down on advertising as the race for market leadership heats up. In its 2019 financial year, it spent  N327.24million on advertising compared to N269.15million in 2018.

Price of Vitafoam shares rose 10 percent, the maximum allowable limit for a trading session, to N4.4 per unit following the announcement of the results on Tuesday

No doubt, the once loss-making company is now back on the path of profitability and shareholders have every reason to smile. How long this would last, only time will tell.

Certificate forgery and victims of own craft

‘We are unique in our business because we understand the…