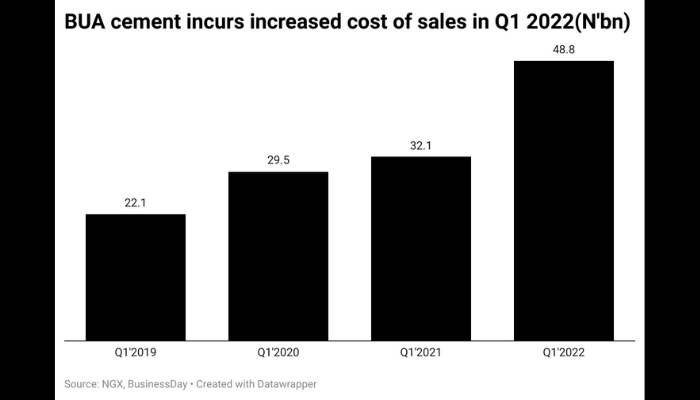 The impact of soaring energy costs is biting hard on Nigerian manufacturers as BUA Cement records a 70.5 percent surge in energy costs, according to findings by BusinessDay.

This development impacted the company’s cost of sale which increased by 52.2 percent to N48.8 billion in the period under review from N32.1 billion in the same period last year.

“Nigeria would not be reeling so much from high diesel prices if there were reliable power supply, which speaks to the failure of the government,” said Jacques Piekarski, the company’s chief financial officer, who was pricing in a 25 percent hit on the Q1 profit of his firm.

Although the company recorded revenue growth of 58.5 percent to N96.9 billion in Q1 2022 from N61.2 billion recorded in the same period last year, the cost of sales incurred was half of its revenue.

This cost is reflected in BUA cement’s profit which grew by 48.2 percent in Q1 2022 to N33.1 billion from N22.4 billion in the same period last year, despite this surge in costs.

The profit margin of the cement company, which conveys the relative profitability of a firm or business activity by accounting for the costs involved in producing and selling goods was 34 percent.

Power accounts for as much as 40 percent of factories’ costs in Nigeria, according to the Manufacturers Association of Nigeria.

However, the poor power supply in the country and the constant collapse of the power grid led to these companies relying on alternative sources of power.

Meanwhile, from a January average of N288 per litre, the price of diesel has more than doubled to N700 in Nigeria, causing widespread anxiety for businesses that rely on the product to power generators that make up for the historically unstable power supply.

Unlike petrol, the government does not subsidize diesel imports, with the price changes mirroring the Russia-Ukraine war.

These rising energy costs are also affecting other companies in the country.

Michael Olawale-Cole, president of Lagos Chamber of Commerce and Industry (LCCI), said the lingering Russia-Ukraine war has triggered a positive oil price shock with spillover effects on operating costs, raw materials, and inflation, with the potential implication of shrinking production of goods and services, especially for manufacturing and agriculture.

“With the cost of diesel at record levels and persisting poor power supply, businesses are running on unsustainable costs and producing at uncompetitive prices, this can lead to job losses as output is constrained due to the unbearable cost of production,” he said.

Segun Ajayi-Kadir, director-general, Manufacturers Association of Nigeria, said some of these implications are the continuous increase in production cost, which will affect productivity and profitability, leading to the possible closure of manufacturing firms; increase in unemployment, and reduction in government tax revenue.