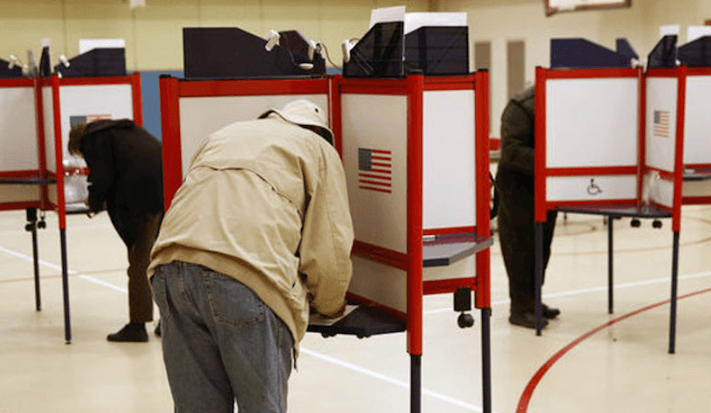 Amazon, BlackRock, Google, and others have signed on to a statement opposing efforts to restrict voting in America, an example of solidarity for Nigerian corporates who often look away as various governments try to outdo each other in drawing up the most odious policies.

Following the defeat of former President Donald Trump and his Republican Party in the 2020 elections, ceding the White House and legislative branches of government to the rival Democratic Party, Republican state legislatures across the United States have introduced about 300 different bills targeted at restricting voting for minorities and poor people.

The Republicans are betting that if they keep the voter roll mostly White and Christian, they would have a fighting chance of reclaiming control of the legislature and the White House as their policies have become unpopular in a country with changing demography and a sharp lurch towards progressive ideas.

It is against this backdrop that these companies are showing solidarity with the people, some at the risk of incurring the wrath of these lawmakers who have threatened to punish them with punitive taxes.

The statement was organised by Kenneth Chenault, a former CEO of American Express, and Kenneth Frazier, the CEO of Merck, a multinational pharmaceutical company.

“For American democracy to work for any of us, we must ensure the right to vote for all of us,” they said in the statement published as a two-page advertisement prominently displayed in The New York Times and The Washington Post.

“We all should feel a responsibility to defend the right to vote and to oppose any discriminatory legislation or measures that restrict or prevent any eligible voter from having an equal and fair opportunity to cast a ballot,” the executives said.

The first of this rash of laws to curtail voting passed in Georgia on April 3. The sweeping legislation introduced more rigid voter identification requirements for absentee balloting, limited drop boxes, expanded the Legislature’s power over elections, and made it a crime to give water to someone waiting in line to vote.

The conservative Republican party principle of limited government has become unpopular in a country where millions have lost livelihoods due to COVID-19 creating the need for massive welfare programmes and where few tech billionaires control staggering wealth leading to calls for income redistribution.

Conservative traditional ethos of family values, guns, and God, is losing the high ground in the face of legalised same-sex unions, rising spate of abortions despite efforts to defund the practice, wanton shooting of school children, and where it has become cool to be irreligious.

Even the party’s leader Trump is a renowned megalomaniac who typifies everything the Republicans used to abhor, further eroding the party’s tenuous hold on its principles.

Companies like Delta Air Lines, Coca-Cola opposed the Georgian law leading to threats by lawmakers in the state to rescind a tax break that saved them a pile of money.

However, Nigerian companies are tame in comparison to their peers, a hangover from years of repressive military regimes whose capacity to eviscerate opposition is unencumbered by either law or simple decency. Their civilian successors have wielded regulatory powers to produce the same effect.

MTN has been sufficiently chastened, Shoprite is fleeing following the lead of large retailers like Mr Price and Woolworth due to troubles repatriating profits on account of the Nigerian Central Bank’s currency policies and regulatory risks.

This situation has led to an unwritten code of conduct – ignore the politicians as long as you are not directly affected while they test the limits of national outrage. When their interests are threatened, they win the fealty of scrupulous politicians through inducements.

If this fails – often because a larger interest is at play – they run to the courts and further seek to induce pliant judges who can rule in their favour, in a spurious show of performative activism.

This partly explains the silence of corporate Nigeria to issues like Nigeria’s inability to effect critical electoral reforms even as organised heists continue to pass for elections in Africa’s biggest democracy.

After two decades of civil rule in the fourth republic, elections are still fraught with challenges involving logistics, wanton violence, voter inducement, partisan and corrupt election umpire, militarisation of elections, disenfranchisement of voters, and asinine court rulings that award public office to those who didn’t even contest an election.

Rather than taking a stand with the people in solidarity, Corporate Nigeria has been silent. The sad part of the issue is that these problems end up at their doorsteps.

The APC-led government in Lagos state, for example, has continued to tolerate armies of miscreants who harass motor drivers and citizens daily. A government with the most sophisticated tax laws in the country has outsourced collections of taxes paid by transport workers to thugs.

While virtually all corporate organisations including banks, insurance, oil companies, and manufacturing firms, among others have their headquarters in Lagos, they are not banding together to speak up against this anomaly.

At the very least, extract a concession from the government, say the rehabilitation of drug addicts, out-of-school children, beggars, or people suffering mental health challenges abandoned by their families, as condition-precedent for any extra-statutory support to the government. This kind of solidarity will rouse a tepid government from inertia.

Nigeria’s healthcare sector lies comatose and so are its education and power sectors. While it is the responsibility of governments to fix them, Corporate Nigeria can lend its voice to calls demanding action.

In the new world of enterprise, running a business has become too important to assume that delivering value to shareholders is a CEO’s only function. It demands that businesses grow a social conscience, to care about the things their publics care about.

For years, Nigerian youths have been raising alarm over banditry by the defunct criminal police outfit, the Special Anti-Robbery Squad (SARS), but were ignored until the outrage spilled into the streets in October last year with unintended consequences for the nation.

Even in the midst of the campaign for action against these rogue policemen, many corporations chose to remain aloof. The problem with indifference is that it does not offer protection against its consequence.

When Nigerians lose money because thieves have compromised their accounts, banks offer little sympathy and the police treat them as suspects rather than victims, thereby missing an opportunity to show good corporate behaviour.

However, there have been times corporate Nigeria has stepped up to the plate. This kind of corporate solidarity was witnessed last year after COVID-19 found its way to Nigerian shores.

The Coalition Against COVID-19 (CACOVID), a Private Sector task force in partnership with the Federal Government, the Nigeria Centre for Disease Control (NCDC), and the World Health Organisation (WHO) with the sole aim of combating Coronavirus (COVID-19) in Nigeria was formed.

This task force was tasked with pulling resources across industries to provide technical and operational support while providing funding and building advocacy through aggressive awareness drives. By the second quarter of 2020, the CACOVID has raised N27billion.

These contributions were vital in providing ventilators, masks, isolation beds and drugs for Covid patients and food palliatives for thousands of Nigerians.

Nigeria businesses devote billions of naira to corporate social responsibility projects across the country. The oil companies are particularly active in this area as it has almost become as important as acquiring an operating license in the region. However, the same energy businesses deplore to advertise their corporate charity is needed to show solidarity to issues facing Nigerians.

For it to matter, corporate charity must not be performative, it needs to be strategic, focused, and consistent. It should transcend issues affecting your own interests, businesses must find a commonality with the ills plaguing society as shipping your HQ to Ghana may not always be a sustainable plan.

Responsible corporate behaviour precludes using your clout to bully the competition as banks are currently doing to payment service companies and telcos who are solving real-world problems for Nigerians just because regulatory institutions in the sector are weak and ineffectual.

The danger with this strategy is that while you may end up having your way, it is possible you will not recognise yourself after a Pyrrhic victory. For example, for all the chest-thumping about billions of Naira Nigerian banks are declaring as profits, they are little more than payment institutions and are scarcely adding real value to society.