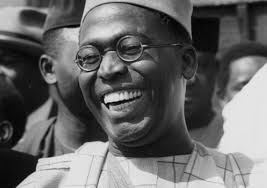 In terms of financial wizardry and sheer genius in economic statecraft, the only master I bow to is the legendary sage, Obafemi Awolowo. Former Head of State General Yakubu Gowon once observed: “If you know of a man greater than Obafami Awolowo, I would like to meet him.” He is in a position to know. He released Awolowo from Calabar prison in July 1966; making him Minister of Finance and Chairman of the Federal Executive Council.

Through prudent management of cocoa revenues, he invested in human capital, in industry, agriculture and rural development and in basic physical infrastructures. He created several institutions to drive the process of social and economic transformation of the region. Among them were: The Western Nigerian Development Corporation (WNDC), the Finance Corporation, and the Western Nigeria Housing Corporation.

The old West had the best civil service in Africa, if not in the emerging Commonwealth. Economist, lawyer and philosopher-king, Awo did not suffer from the inferiority complex of the inferior minds who call themselves leaders today. He was able to bring into brought into his inner circle men of distinction such as Simeon Adebo, Rotimi Williams, Ojetunji Aboyade, Samuel Aluko, Hezekiah Oluwasanmi, Banji Akintoye, Sam Ikoku, Anthony Enahoro and Alfred Rewane.

While seeking the counsel wisemen, he was always master of his own brief. In his own words: “While many men in power and public office are busy carousing in the midst of women of easy virtue and men of low morals, I, as a few others like me, am busy at my desk thinking about the problems of Nigeria and proffering solutions to them. Only the deep can call to the deep.”

Great men are always are always misunderstood.  Our Igbo brethren accuse him of having spread hunger during the Biafran War which led to 1 million dead, most of them children. They also blame him for the policy of allocating a paltry 20 pounds to all Ndigbo as part of the post-bellum settlement. They also attacked him bitterly for advocating the banning of Okirika, an area of business that is still dominated by Igbo traders to this day.

History has absolved him. He insisted that it was not up to him to feed his adversaries in war so that they would wax stronger to fight him. He also revealed that the 20 pounds policy was a collective ministerial decision rather than that of a single minister. As for Okirika, those who still believe in it should be ready to receive the next consignment of the clothes belonging to Chinese Covid-19 victims rumoured to have been shipped to our shores.

With Awolowo as Finance Minister, Nigeria did not borrow a single dollar from the Washington Institutions, bilateral partners or the international capital markets during 1967-1970. Same goes for the post-war rehabilitation and reconstruction of the war-torn East.

Awolowo was a man of fastidious discipline. The British colonial administrators used to complain that Awolowo would not deign to share a bottle of wine with them. Awo conquered the baser passions, to allow himself focus on high and noble goals: “I will, more than ever before, subject myself to severe self- discipline. Only men who are masters of themselves become easily masters of others. Therefore, my thoughts, my tongue, and my actions shall be brought under strict control always.”

Obviously, if you want a good Finance Minister, never go for someone as flamboyant as Okotie Eboh. Go for someone who is lean and mean. Woe betides you if you go for a greedy pig. You will only get a pork-barrel. Go, rather, for someone who is modest and restrained in his ways – someone who can say “No”. A man or woman with courage and convictions – who can plug the haemorrhage that defines our fiscal space today. Awolowo was of such a breed. If he saw you with a woman other than your wife, you were out of his cabinet. He believed that if a man could not be disciplined in his private life, you could never trust him with government assets under his care.

He also led by example. It is remarkable that he never lived in a government building throughout his career, unless you characterise his 3 years in Calabar prison as being residency in a “government building”. As Premier of the West, he lived in his own house at Oke-Bola, Ibadan. Whilst serving the Federal Government, he resided in his private house in Apapa. He took financial accountability very seriously.

And most crucially, he always did his homework. Confronted with challenges, he was not one to seek advice from Babalawos or from the crooks that go by the name of “prayer contractors” nowadays. Rather, he would retreat to the inner sanctums of his study; thinking, analysing and developing original solutions.

He had this big thing about “Mental Magnitude”.

Himself a philosopher, one of his life-long friends was the Austrian-British philosopher of science, Karl Popper, with whom Awo used to spend some of his vacation at his home in in the outskirts of London discussing issues about truth, logic, freedom and the prospects for democracy.

According to the philosopher Akin Makinde, Mental Magnitude derives from a combination of the thinking of Plato, the Roman Stoics and René Descartes. It is, in his words, “a philosophical doctrine which derives from a theory of mind and body, with the assertion that the mental is superior to the physical element of a person, and should take control over the emotions, desires, and actions”.

Mental magnitude demands that we embrace the discipline of thinking while using our mind and rational faculties to solve humanity’s manifold challenges. It is the antithesis of superstition, ignorance, incompetence, solipsism and stupidity. Awo thought deeply through the issues of economic planning, development strategy and policy management; coming up with highly original and creative solutions.

The late sage was a man of supreme confidence. He was not arrogant, although many of his foes misinterpreted his self-confidence as hubris. He did not suffer fools gladly, if truth be told. He was so sure of himself and of his own God-given endowments that he saw himself as inferior to nobody. This is why he was loathed by a Northern Caliphate that was steeped in feudalism and the false mythology of “born-to-rule”.

Addressing the youths recently, one of his protégés, eminent historian Banji Akintoye, reminded us: “Obafemi Awolowo’s success was due to his confidence that the British white rulers of Nigeria were not superior to Nigerians, and that Nigerians can indeed achieve great things…You are much stronger than you think. Sure, you do not have the kind of money that the corrupt politicians of these days have; but if you use your head, mobilise your huge numbers and your education sensibly, and if you operate purposefully and with discipline as Awolowo would do in circumstances such as these, you can change the destiny of your peoples for the better.”

Nigeria’s destiny will be made or marred in the coming post-coronavirus “new normal”. Two roads stare us in the face: the straight and narrow calls for discipline, restructuring, rebirth and economic transformation; while the other – of profligacy, banditry, genocide, incompetence – portends disintegration and dissolution. It is a choice that we must make. How we manage the looming fiscal crisis in the emerging global order will determine whether we survive or perish. Awolowo’s wisdom must be our guide if we are to overcome and prevail.

To quote the American poet Robert Frost: “Two roads diverged in a wood and I – I took the one less traveled by, and that has made all the difference.”