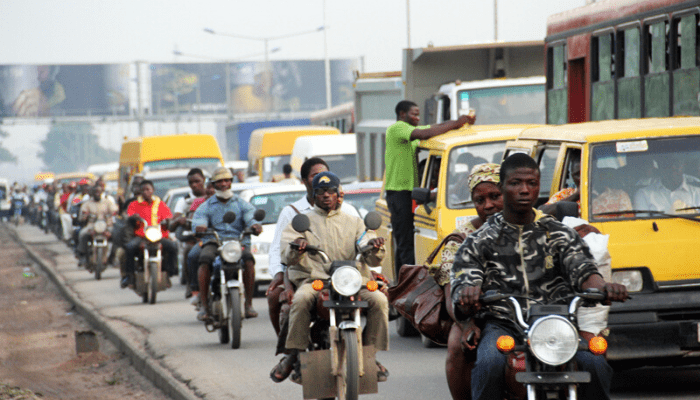 Active Dissenter: I saw your post last night. Sorry about the traffic that kept you on the road until 11 PM. What time did you wake up this morning?

Passive Complier: Don’t ask me jare, I know you just want to rub it in because you know I support Sanwo Olu’s Okada ban. I’m fine. All of this is just temporary pain on the way to building a better Lagos.

AD: No! Me? You got it all wrong. I just said I should greet you and express my sympathy about your ordeal…

PC: It’s OK, I have heard you. What time is the meeti-

AD: I just think it’s funny that you support something that was made to benefit a few people, and you’re not one of them, that’s all. I mean seriously, which part of this policy strikes you as something that is meant to help your life?

PC: Here we go again with your conspiracy theories. What is it this time? Someone is conspiring against okada riders to force them to leave Lagos ba? Or let me guess, Sanwo Olu has a grudge against motorbike riders because of a bike accident from his childhood? Nothing you say will surprise me again.

AD: If only it were that simple.

PC: Oh, so it’s complicated? Wow! Maybe it’s Buhari that is trying to punish those that didn’t vote for him by forcing Sanwo Olu to lock them inside traffic on Third Mainland Bridge? Do you ever get tired of constantly looking for hidden motives and meanings inside everything the government does? Why is it so hard for you to believe sometimes that the government can act in good faith?

AD: Because if you actually pay attention to what Nigerian governments do depending on who is in office, you would realise that either they are acting selfishly all the time, or Nigeria has the highest rate of amazing coincidences in the world. Even if coincidences exist, it is not possible that they happen every single time. I mean come on! I went to school!

PC: So who is benefitting from this okada ban now? And don’t tell me it’s the BRT operator, because bikes are not supposed to compete with buses, and even if someone in government is benefitting from the bikes not being on the road, you cannot expect a city like Lagos to have bikes littering its roads. Lagos is a megacity.

AD: What if I were to tell you that the okada ban is a temporary measure intended to clear the market of competition before certain people in and around power bring out their own bike-hailing service?

PC: Are you accusing the Lagos State Government of using its power to distort a transport industry on behalf of its crony on the pages of a national daily newspaper?

AD: No, I just said: “what if”. I can neither confirm nor deny that a little birdie told me that. All Im saying is that if in the next month or two the ban is lifted and then you see a new bike-hailing startup all over the news being endorsed by a popular dude from Oshodi, can you just imagine how much of an amazing coincidence that would be?

PC: If you cannot say it with your chest, then it’s worth nothing to me. Give me a solid example of the government acting in bad faith and doing things that only worsen Nigeria, just to benefit some people in power. That’s what I’m asking for.

AD: I can give you some past examples of some very convenient coincidences if you like.

AD: Remember the forex scarcity in 2016? Remember how every local and international analyst and their dog said that all Nigeria had to do was allow the naira find its true value somewhere around N350 – $1 to ease the shortage? Remember how President Buhari died on the hill of spending the forex reserves to prop up an artificial exchange rate of N197?

AD: It was probably the world’s greatest coincidence that the well-connected money changers this policy helped just so happen to be from a part of Nigeria that the president holds allegiance to. So they got to have the most epic 6 months of forex round-tripping that this country has ever seen, effectively transferring billions of naira from south to north while the president went on TV to say that the mostly southern Nigerian students stuck abroad because of this policy shouldn’t have been there in the first place because they could not afford it.

PC: This is just your opinion. There is no evidence that the president maintained a false exchange rate just to help his kinsmen. Again, that is a very weighty accusation to make in a national news medium.

AD: I know, which is why I said it was the world’s greatest coincidence. And what made it even more of stunning coincidence is that just three years later, the same president decided that after spending billions of dollars to potentially enrich bureau de change operators, spending these same forex reserves to import anything was now an economically ruinous action. Imagine the coincidence that he is willing to completely contradict his own prior economic stance when the people who run the industry in question generally tend to come from a part of the country he famously labelled as “the people that gave him 5 percent of their votes.”

PC: Are you seriously suggesting that a Nigerian government decides to spend or withhold billions of dollars based on nothing but ethnic politics?

AD: It is on record that the Nigerian government ignored professional advice to build Africa’s largest steel mill outside Onitsha, and built it in Ajaokuta instead because certain people thought that Igbo people should be punished for the Biafra war, and they did not ‘deserve’ to have such a project in the southeast. Twenty-six years since it was completed, it has never worked for one day, at least partially because it is too far from the source material it needs – material that is abundantly available where the consultant recommended for it to be built in the first place! This is on historical record by the way. You can google it.

PC: OK I hear you on that, but that is one isolated example. This still does not prove that government policies are always made for selfish reasons.

AD: Then let us come back to Lagos. Maybe it is also a coincidence that the state government has treated the Ubers and Bolts very differently to the Orides and Gokadas.

PC: Well cars are part of the Lagos Masterplan. Motorbikes are not.

AD: Yes, but that never stopped uniformed agencies from going after Ubers aggressively and harassing them a couple of years ago. That was when we were hearing that Ubers are illegal and unlicensed to carry out taxi operations in Lagos. The cars were even being impounded. Why did that stop all of a sudden? Ubers are still technically illegal in Lagos, aren’t they? The law hasn’t changed since 2016 has it?

PC: I did not hear about this.

AD: Well I did because I was an Uber driver back then. In fact, I had my car impounded once, and I had to pay N30,000 to reclaim it. Or is it that the Lagos State Government suddenly sees the benefit of helping instead of hurting innovation and business, but that somehow does not extend to the two-wheeled versions of the same thing? Surely there is no way that the decision-makers and their families and friends use Ubers but not bikes. I mean, zero chance that their skin in the game leaned on government policy to forget about the law for one, but not for the other. There is almost no chance that some people found it impossible to bully a multibillion-dollar ride-hailing corporation, but see their luck in artificially capturing the nascent bike-hailing market using state power.

PC: You’re appearing in a national daily, remember. These are some hefty allegations.

AD: Have I made any allegations here? All I said is that these are the remarkably consistent coincidences that we experience in Nigeria. Abi are you denying that they are anything other than innocent coincidences?

PC: I agree. These are all coincidences. Best if we never speak of this again.

One person’s glimpse of life after the virus