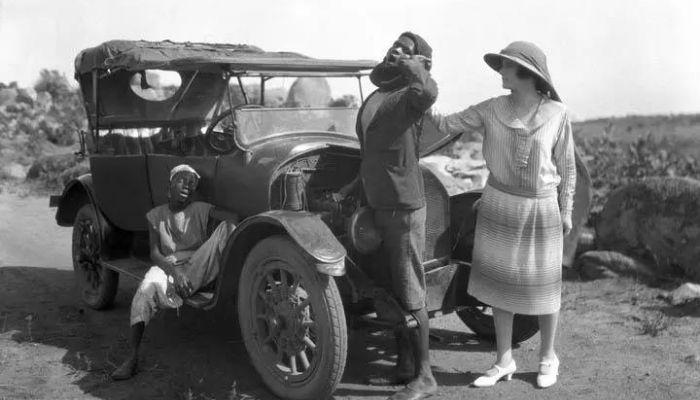 (an excerpt from the forthcoming book ‘PELEWURA’)

The sun was shining brightly this afternoon.

They were all sitting in the expansive courtyard of Iga Idunganran. Oba Falolu himself was present, as were many of his white cap chiefs.

Pelewura sat in the front row, with the crowd. Akowe, her clerk, came up to whisper in her ear that he had counted three thousand people in the crowd.

Pelewura reflected that the past one year had been a difficult year in her life. Her friends, the Bourdillons had returned to England at the conclusion of the Governor’s tenure in the colonial service. She was pleased that despite the bad blood generated by the Pullen measures and the general air of discontent among Lagosians, she was able to organize a rousing send-off for him.

The man rose briskly to his feet, cleared his throat with a dry cough, and took a few steps forward. His eyes settled on an invisible object in the far distance

The loud revving of a car was heard outside the palace gate. A gangling Englishman in starched white shirt over brown khaki trousers walked into the compound. The chiefs and government officials rose to their feet to receive him. The Oba kept his seat, but he held out a hand. They shook hands. The man moved to his seat beside the king.

A murmuring had arisen among the women. The man was Captain AP Pullen, and the meeting with the women had been summoned by the King at his behest.

Asoju Oba, at a signal from the monarch, called the meeting to order.

There was a reluctant smattering of ‘Amin’ among the audience.

The man rose briskly to his feet, cleared his throat with a dry cough, and took a few steps forward. His eyes settled on an invisible object in the far distance.

After perfunctory greetings to the Oba, whom he addressed as ‘Prince’, in the custom of British officials who perpetually claimed that there was no King, but only a head of a ruling house in Lagos, according to their reading of the treaty ceding Lagos to the British monarch, he launched into his address.

One of the local officials who had arrived earlier was translating for him.

A skeptical hum went through the audience.

‘I stay awake every night trying to make sure nobody, whether poor or rich, goes to bed hungry in Lagos. …’

Pelewura was watching for a hint that the man had come with some peace offering, something to show the government was aware of the strength of the people’s feelings on the so-called Pullen measures – the harsh price controls that were aggravating everybody.

Pelewura sighed as she listened. Why had she allowed herself even to hope for the barest hint of concession?

Her concentration on the wiry man in front was fading in and out. She would inevitably be called upon to respond on behalf of the women. She was trying to frame in her head what she would say to the man, as he sat facing her. She was mindful that the throne of Lagos must not be put in trouble as a result of anything anybody did or said.

When the white man came back into focus, he was rounding up his speech.

.’Let us obey the law. There must be no breakdown of Law and Order…Once again I thank you, Prince, for giving us this opportunity to have this frank exchange of views…’

He sat down at length.

Pelewura smiled grimly. The man had just talked down to everybody and was yet to listen to a word from anyone. He was just going through the motions.

‘We thank our honoured guest for his words.’ He turned to Pelewura. ‘Now it is the turn of our women to respond.’

Pelewura got up. She was seething with suppressed rage, and she was still not certain what to say.

‘Kabiyesi I am on my knees – ‘ she genuflected towards the monarch, who acknowledged her with a wave of his flywhisk.

‘Deputy Commissioner Pullen – ‘ She curtsied in the direction of the white man. The angry murmuring among the crowd was rising, so that her voice could barely be heard.

‘Market leaders from the sixteen main markets of Lagos, you are all here, stand up, please.’

From within the crowd, the leaders stood up, one by one.

‘Come forward’ she gestured with her hands. The women made their way to the front.

When they were all in place, she spoke further.

‘Our honoured guest has said we are here to have a frank exchange of views.’ She lifted her hands in the air.

‘Give him your views.’

One by one, the market leaders spoke. The tone of each speaker was more acerbic than her predecessor. The tension in the atmosphere was steadily rising.

Pelewura stepped forward. There were beads of sweat standing on her forehead, and her mien was combative.

‘Mr Deputy Commissioner, you have heard the views of the people. Their views are my views.’

The white man made a gesture. He wanted to say something.

But the women were done with listening.

‘We will not obey your law, Captain Pullen. I mean no disrespect. The women of Lagos have spoken.’

She genuflected towards the King.

The crowd rose and began to make their way out. The din was still great.

The King rose to see Captain Pullen off, a look of careful neutrality on his face.

The meeting was over.