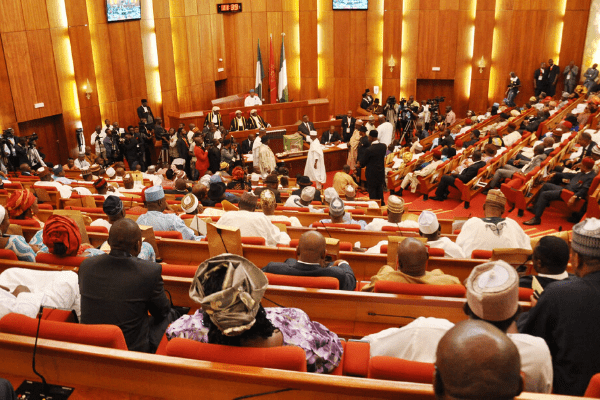 The Red Chamber took the decision  sequel to the consideration of a motion on “the need to review the domestic legal framework against illicit Financial Flows and to consider the creation of a Tax Amnesty for the voluntary repatriation of funds to Nigeria.”

Also to be invited are the Heads of the Nigerian Financial Intelligence Unit (NFIU); the Nigerian Export-Import Bank (NEXIM); Nigerian National Petroleum Corporation (NNPC) among other relevant institutions.

The Senate while mandating the Senate Committees on Finance, Anti-Corruption and Financial Crimes; Banking, Insurance and other Financial Institutions to investigate illicit financial flows, called for an appraisal of the Federal Inland Revenue Service’s (FIRS) current framework for tracing, identifying, preventing and sanctioning Cross-border tax evasion and other illicit financial outflows.

The Senate also mandated the Committee to come up with a holistic legislative framework on how to repatriate lost revenue due to illicit financial flows, mitigate such future unabated flows and provide an efficiency strategy for the reinvestment of repatriated resources into the Nigerian economy.

Leading the debate, Sponsor of the motion, Senator Gershom Bassey (PDP – Cross River South), cited a 2014 Global Financial Integrity Report and said, “Nigeria lost a minimum of US$140 billion to illicit financial flows between 2000 and 2014, mainly to crude oil and commercial activities mis-pricing.”

According to the lawmaker, Nigeria was ranked among the global top 30 countries of illicit financial outflows by dollar value, with US$8.3 billion in illicit outflow from Nigeria in 2015.”

Bassey expressed worry at further findings by the Tax Justice Network and International Monetary Fund, “that developing countries, including Nigeria, have lost over US$200 billion per year to illicit financial flows as multinational corporations neglect, fail and/or refuse to pay taxes in these countries where they generate substantial amounts of profit.”

“Nigeria loses approximately US15billion annually to offshore tax evasion. This has resulted in a consistently low tax revenue as a percentage of Gross Domestic Product (GDP), as low as 5.7 percent in 2017. Such statistics are alarming, especially when compared to the 17.2 percent average of 26 African countries in the same year”, Bassey said.

He added that, “this incessant financial drain on the Nigerian economy continues to have negative implications for domestic resource mobilization and long-term economic growth and development.”

“IFFs continue to pose serious obstacles to development, as approximately five percent of the IFFs from Africa can be attributed to corruption, while 95 percent of IFFs come commercial and criminal activities. These unrecorded and untaxed Cross-border transfers, could have been mobilized as part of government revenue and injected into Nigeria’s formal economy towards sustained development and economic growth”, the lawmaker noted.

Bassey expressed concern that “statistics show that the amount of revenue lost annually by Nigeria is more than the sums provided as development aid.”

“For example, the net official development aid received by Nigeria in 2017 was US$3,358,790,000. Additionally, the United States Agency for International Development (USAID) has donated over US$526.7 million in humanitarian assistance to Nigeria and the Lake Chad Basin, since 2017. Neither of the above figures match the estimated US$15 and US$18 billion Nigeria loses to IFFs annually”, Bassey added.

The lawmaker lamented that though Nigeria has at least 12 institutions and agencies responsible for tackling illicit financial flows (IFFs), the country “continues to be menaced by weak regulatory structures and the complicity of other financial secrecy jurisdictions, among others.”

He added that global awareness has prompted governments across the world to develop measures and policies aimed at eradicating the perpetuation of illicit financial flows (IFFs), such as the Organization for Economic Co-operation and Development (OECD) Common Reporting Standard (CRS).