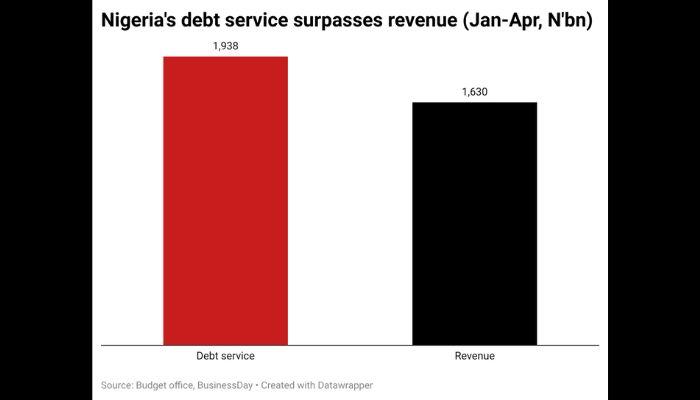 The federal government has projected that petrol subsidy will gulp N6.7 trillion in 2023, if bold steps are not taken to do away with it, even as debt service outpaced its revenue in the first four months of this year.

Zainab Ahmed, minister of finance, budget and national planning, said on Thursday that huge subsidies had overburdened government finances and pushed the fiscal deficit to as much as N3.09 trillion between January and April this year.

She spoke in Abuja at the public consultation on the draft 2023-2025 Medium Term Fiscal Expenditure/Fiscal Strategy Paper, which officially commenced preparation of the 2023 budget.

Between January and April this year, Nigeria’s oil and gas revenues slumped 51 percent compared to budget estimates to N1.23 trillion, as expected benefits from rallying oil prices continued to elude the country due to significant oil production shortfall and petrol subsidy burden.

For the full-year 2022, oil revenues were projected at N9.37 trillion, but just 39 percent of the proposed N3.12 trillion for April-January was realised.

Data indicate that as at April 2022, the federal government’s retained revenue was N1.63 trillion, indicating only 49 percent of the prorated target of N3.32 trillion.

Customs collections (made up of import duties, excise and fees, as well as federation account special levies) fell below the target by N76.77 billion (25.42 percent).

Other revenues amounted to N664.64 billion, of which independent revenue was N394.09 billion.

However, aggregate expenditure for 2022 which was estimated at N17.32 trillion, with a prorated spending target of N5.77 trillion at the end of April, but actual spending was N4.72 trillion, the minister said.

Of this amount, N1.94 trillion was for debt service, N1.26 trillion for personnel cost, including pensions, while only N773.63 billion was spent on capital expenditure.

On how the government intends to fund the huge subsidy burden going forward, Ahmed said the transition of the Nigerian National Petroleum Corporation to a commercial entity has raised the expectation that the huge bill could be offset through royalties and taxes from the company, which will no longer make contributions into the federation.

She confirmed that for about eight months prior to the NNPC’s transition, the federation had not been receiving any revenue from the national oil company mainly because it had been covering the cost of fuel subsidy.

“Assuming they were not paying that subsidy, that value would have been remitted to the federation and this is the arrangement that we seek to continue in 2023,” the minister said.

“Therefore it will still be a federation expenditure but will be undertaken by NNPC as a supplier of last resort and we see a situation where maybe there will be coming on stream of new refineries that other marketers will be begin to find the PMS retail market attractive enough to invest in buying fuel themselves and selling to the Nigerian market.

“That’s why it is important for us to consider this issue of removal of fuel subsidy very seriously, because no marketer is willing to buy PMS after sourcing the foreign exchange and come and sell it at a lower price.”

Ahmed said the government’s projected fiscal outcomes in the medium term are presented under two scenarios based on the underlying budget parameters/assumptions, with implications for net accretion to the Federation Account and projected deficit levels.

The first indicates what she called “the business-as-usual scenario”, which assumes that the subsidy on PMS, estimated at N6.72 trillion for 2023, will be retained and fully provided for.

The second, according to her, is “the reform scenario”, which assumes that petrol subsidy will remain up to mid-2023, based on the 18-month extension announced early 2021, in which case only N3.36 trillion will be provided for.

Additionally, there will be tighter enforcement of the performance management framework for government-owned enterprises (GOEs) that will significantly increase operating surplus/dividend remittances in 2023.

The draft 2023-2025 MTEF/FSP has been prepared against the backdrop of continuing global challenges occasioned by lingering COVID-19 pandemic effects, as well as higher food and fuel prices due to the war in Ukraine.

She said that given the severely constrained fiscal space, it is not feasible to make any provision for the capital expenditure of ministries, departments and agencies in 2023 beyond multilateral/bilateral loan-funded and donor- funded projects.

On the revenue side, N6.34 trillion has been projected for 2023, out of which only N373.17 billion or 5.9 percent comes from oil-related sources in the first plan. The balance of N5.97 trillion is to be earned from non-oil sources.

The minister said in addition to subsidy reform, the second scenario assumes an aggressive implementation of cost-to-income limits of GOEs. With these, the 2023 revenue is projected at N8.46 trillion (15.1 percent or N1.51 trillion less than the 2022 budget) but N2.12 trillion more than the earlier.

Of this, N1.99 trillion or 23.6 percent is projected to come from oil-related sources, while the balance is to be earned from non-oil sources.

The key parameters and other macroeconomic projections driving the medium-term revenue and expenditure framework have been revised in line with the emergent realities because the initial projection is not likely to be achieved based on current trends, according to the minister.

Consequently, the medium-term projections deviate from the projections in the National Development Plan 2021-2025. They have been updated based on a combination of current realities and a modified medium-term outlook.

In the draft MTEF, the federal government projected an oil benchmark of $70/barrel, oil production of 1.69 million barrels per day and an exchange rate of N435.57/$.

According to Ahmed, investment, especially from foreign sources, is expected to be dragged down by interest rate hikes in advanced economies, foreign exchange management concerns and other domestic challenges, including insecurity.

He said: “That is why we consumed all of the revenues and they have been unable to remit anything. And this is because during the period January to April, the average daily production of crude from Nigeria was 1.3million barrels per day, while the budget for 2022 was originally based on 1.86 million barrels per day.

“Earlier in the year when we noticed that there were challenges, that was revised down to 1.6 million barrels but in the January to April period, production was down 300 thousand barrels per day bis-à-vis budget and that’s because of the oil theft and the vandalization of pipelines in the Niger Delta.

“You can imagine if we were pumping an additional 300 thousand barrels of crude oil per day, what that would have meant for government revenues during the period. And better still, if we were able to meet our OPEC quota currently approximately 1.8 million barrels. So we are about 500 thousand barrels short of our quota, even though currently the capacity to produce more than our OPEC quota exists. That is a problem that also must be fixed, addressing oil theft and pipeline vandalisation and that’s a job for the security agencies.”