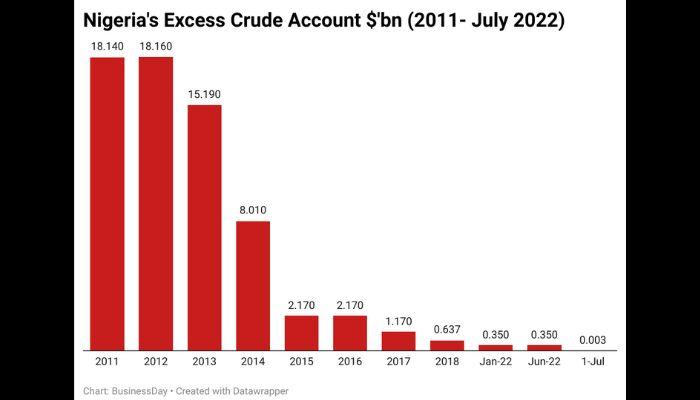 A steep drop of approximately 10,000 percent in savings from oil sales, which was created to stabilise the Nigerian economy in case of a shock, is the latest crack in the country’s line of defence amid limited crude exports, biting fuel subsidies, piling debt and a struggling economy.

In a season where veteran oil producers like Saudi Arabia and rookies like Guyana and Bahrain are smiling to the banks as Brent crude surpassed the unprecedented $100 mark in recent weeks, Nigeria, typically Africa’s largest oil exporter, has struggled to benefit from surging crude prices due to pipeline theft and years of underinvestment that have limited oil exports.

The Nigerian government’s response has complicated matters. Under President Muhammadu Buhari’s watch, fuel subsidies and high expenditure projects have sapped state coffers including the Excess Crude Account (ECA) in recent weeks while the country’s debt servicing costs have also outpaced public revenue in the first four months of this year.

“The excess crude account, which stood at over $2 billion when President Buhari took office, has dropped to $376,655, despite crude oil prices consistently exceeding the benchmark oil price of budget,” Olumide Adesina, a financial expert said.

The ECA was created by the administration of former President Olusegun Obasanjo in 2004 for the purpose of saving oil revenue in excess of the budgeted benchmark and had a balance of $20 billion as at January 2009.

Considering Nigeria’s reliance on the oil and gas industry, it would have been expected that the Federal Government would do everything to ensure savings like those in the ECA are sufficiently grown and used as a fiscal buffer to mitigate loss in income from either low price of oil or low oil production output. However, the reverse has been the case, with the situation worsening yearly.

Experts blamed it on profound revenue challenges and a lack of rules governing deposits and withdrawals from the special account.

“Save for the Obasanjo administration, the abuse of the ECA has become serial. It is deeply disturbing that the Buhari government has managed the account poorly despite global oil price staying above the benchmark of the federal budget,” Charles Akinbobola, a financial analyst at Creditville Limited, told BusinessDay.

He also blamed poor levels of transparency exhibited by various agencies and officials of government charged with managing the funds as reasons for squandering extra oil proceeds on frivolous spending and rampant corruption.

“It’s terrible behaviour though. They didn’t tell the owners of the account, just spent and reported it,” a senior source in Nigeria’s energy sector said. “It means they don’t care about providing any structure for the unborn generation”.

In its defence, the federal government said the recent withdrawal of $35 million was used as an advance payment for the purchase of patrol vehicles for the Nigerian Navy.

It said the withdrawal was imperative so as to consolidate on maritime security gains recorded in the Gulf of Guinea.

While Nigeria’s rainy-day fund nose-dived from $35.37 million to $376,655 in June 2022, other countries are taking advantage of oil windfall to rebuild finances, pay down debt and raise government spending.

For instance, Bahrain announced in April, it would put $2 into the Future Generations Reserve Fund for each barrel of crude sold at over $80. The government also will set aside $1 when oil is over $40 and pay $3 if it exceeds $120.

Saudi Arabia, which is set to record its first budget surplus in about a decade this year, has also announced plans to capitalise on the boom times to add to its foreign assets and boost investment by its sovereign wealth funds.

“The world is turning its back to oil and Nigeria seems docile,” Luqman Agboola, head of research at Sofidam Capital said. “We have absolutely nothing to fall back on, yet we act as if we are a rich country.”

During the lockdown in 2020, Nigeria’s three ‘rainy day’ funds – Stabilisation Fund, Excess Crude Account, Nigeria Sovereign Wealth Fund – with about $2.25 billion, was able to fund about 7.7 percent of the revised 2020 federal budget.

This compared poorly with Norway, with a sovereign wealth fund worth more than $1 trillion. To assuage the impact of COVID-19 on the government’s earning, Nigeria withdrew $150 million but Norway cashed $37 billion.

The new Petroleum Industry Act has no provision to compel government agencies to deepen funding for these funds or ring-fence them against abuse.

“While the PIA has some commendable provisions, a few issues such as financial savings are not dealt with,” Ayodele Oni, an energy lawyer, told BusinessDay.

Experts say persistent demand by states to fund various programmes and the inability of the Federal Government to generate adequate revenue to fund its operation had put pressure on it to draw down the ECA.

In 2012, the account recorded total outflow of N2.07tn. Out of this amount, the sum of N1.39tn was used to augment revenue distribution among the three tiers of government.

For the 2013 fiscal period, the sum of N1.99tn was taken out of the account by the federal government. Out of this N1.99tn, about N1.08tn was withdrawn to augment revenue shortfall to the three tiers of government, while N505bn and N405.63bn were used for fuel subsidy payment and special intervention fund, respectively.

President Buhari, the poster child for fighting corruption, also dipped his hand into the stabilisation fund. Between 2016 and 2018, he dramatically increased the monthly security allowance allocated to the 36 states.

In 2017, he withdrew $1 billion from the ECA without any formal consultation from the appropriate bodies. When confronted, he played the “Boko Haram” card like his predecessor; an explanation many experts did not buy.